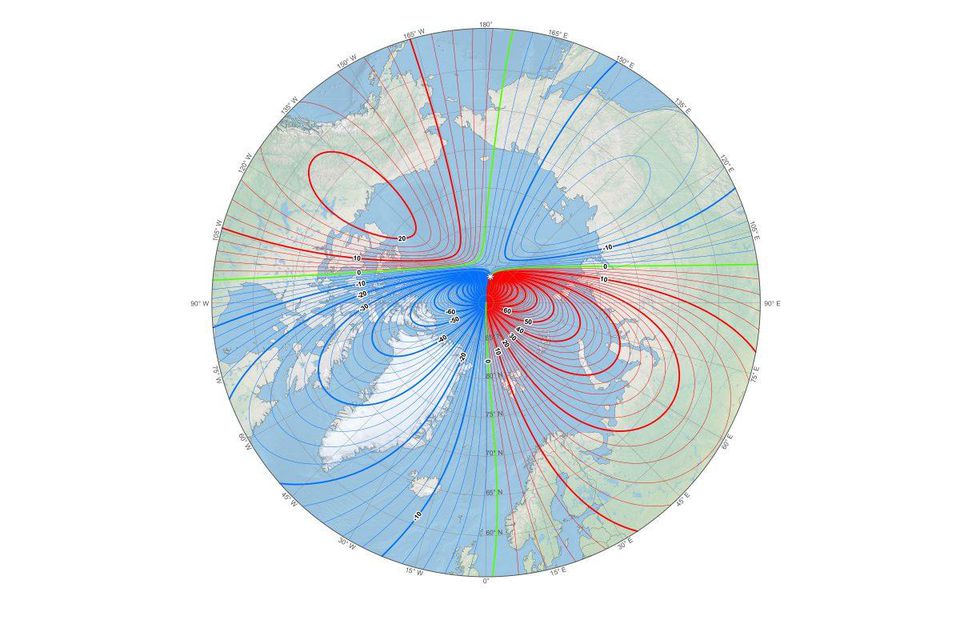 This map shows the new location of the magnetic North Pole (the white star). NOAA NCEI/CIRES

Earth’s magnetic North Pole is quickly moving from the Canadian Arctic toward Russia. The model update ensures the accuracy of work in governmental agencies around the world. Specifically, NASA, the Federal Aviation Administration (FAA) and the U.S. Forest Service use the magnetic poles in their daily operations from mapping to air traffic control. On a more individual level, smartphones use the magnetic north for GPS location and compass apps.

Is Earth’s Magnetic Field About To Flip?

While the rapid movement of Earth’s magnetic North Pole may cause concern over the potential flip of magnetic poles, there is no evidence that such a flip is imminent. Geologists can interpret magnetic minerals in rocks around the world to reveal the history of magnetic reversals on Earth.

Earth’s magnetic poles have flipped many times in its history, with the latest reversal occurring 780,000 years ago and 183 times in the past 83 million years. When Earth’s magnetic poles do flip, it won’t be a catastrophic “end of the world” scenario. From examining fossil records, there is no evidence that a magnetic field reversal causes increased extinctions, volcanic activity, etc.

However, one big issue will lie in the extensive use our technology relies on the magnetic poles. A reversal would upend navigation and communication systems around the globe. Thankfully, a pole reversal in the past typically takes thousands of years to flip. This will give us ample time to develop mitigating plans. In reality, when Earth’s magnetic field does flip, who knows what planet our descendants will be living on?

About the author Trevor Nace,

I am a geologist passionate about sharing Earth’s intricacies with you. I received my PhD from Duke University where I studied the geology and climate of the Amazon. I am the founder of Science Trends, a leading source of science news and analysis on everything from climate change to cancer research. Let’s connect @trevornace