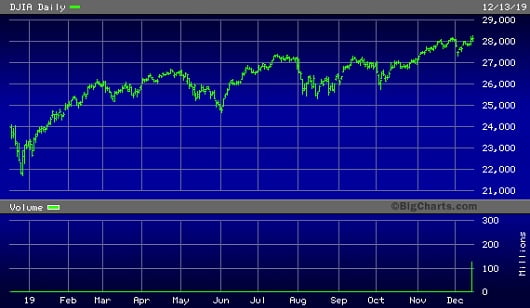 Last Thursday, December 12, the New York Fed announced that over the next month it would shower the trading houses (primary dealers) on Wall Street with a total of $2.93 trillion in short-term loans. The money is for a Wall Street liquidity crisis that has yet to be explained in credible terms to the American people and yet the New York Times does not appear to have an investigative reporter assigned to investigate what’s really going on just 11 years after those same trading houses blew themselves up in the biggest financial crash since the Great Depression and took the U.S. economy along for the ride.

The New York Fed’s repo (repurchase agreement) loan program began on September 17 when repo loan rates spiked from approximately 2 percent to 10 percent – meaning either liquid funds were not available to loan or the mega banks on Wall Street were backing away from lending to certain counterparties. Repo loans are typically between banks, hedge funds and money market funds on an overnight basis and are made against good-quality collateral. Since that time, the New York Fed has been making these loans to the tune of hundreds of billions of dollars weekly.

The New York Times covered the subject in September. Then an eerie silence took hold in October and November as the Fed continued to pump out over $3 trillion in cumulative loans to Wall Street’s trading houses. On December 8 and December 12, the New York Times simply ran articles by Reuters on the Fed’s loans, which are the first of their kind since the financial crisis.

The $2.93 trillion that the New York Fed will funnel to Wall Street over the next month consists of up to $120 billion each weekday in overnight loans through January 14 and $440 billion in term loans ranging from 3-days to 32 days. In addition, during the last week of the year (on Tuesday, Wednesday and Thursday) the Fed will bump up its overnight loan offerings to $150 billion from $120 billion, thus providing an additional $90 billion that week.