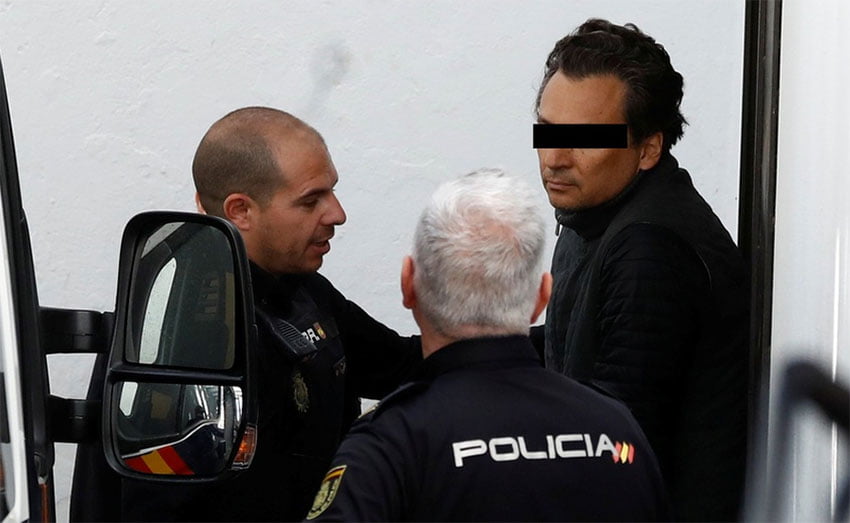 Emilio Lozoya, former CEO of state oil company Pemex who went on the run last May after being accused of serious financial irregularities during his tenure, was arrested in an upscale suburb of the Southern Spanish port city of Malaga on Wednesday. Lozoya is accused of taking part in an elaborate scheme designed to systematically “plunder” Mexico’s finances, according to the country’s Attorney General Alejandro Gertz Manero.

Lozoya is under investigation for his alleged involvement in Pemex’s repurchase, for the obscenely inflated sum of $665 million, of two fertilizer plants that the oil company had sold to private investors many years earlier. One of the plants hadn’t been operational for 14 years — and still isn’t — while the other one operated well below capacity. Before the purchase of the fertilizer plants, international auditors warned Pemex’s board of their dire state, but the company went ahead with the purchase anyway.

Such reckless lavishness was a constant feature of Lozoya’s tenure as CEO of Pemex. “It was conduct that was repeated in a very structured way with the aim of looting the country. I don’t see any other way to describe it,” says Gertz Manero.

A one-time senior election campaign advisor and trusted confidante of former Mexican President Enrique Peña Nieto, Lozoya is also accused of receiving millions of dollars in bribes from scandal-plagued Brazilian construction firm Odebrecht in exchange for his support in obtaining public work contracts. The money reportedly passed through shell companies in the British Virgin Islands before coming to rest in private bank accounts belonging to Lozoya in Switzerland, Liechtenstein, and Monaco.

Lozoya was CEO of Pemex from 2012 to 2016, during which time the company’s already fragile financial health underwent a dramatic turn for the worse. By early 2016 the group’s total sales had plunged by 21%, production had slumped 24%, its annual operating losses had soared to a record high of almost $30 billion, and its total debt load had grown from $64 billion in 2012 to $106 billion. Today, even after a couple of bailouts last year, it’s still above $100 billion, of which roughly $85 billion is owed to bondholders.

Obviously, this was not all one man’s doing. Between 2014 and mid-2016 the price of oil plummeted, crippling the finances of many oil producing economies. The Mexican peso also lost almost a third of its value against the dollar during this period.

There are plenty of other reasons for Pemex’s decline, including severe budget cuts, shrinking oil reserves, chronic mismanagement, lack of vision, lack of investment, negligence and the huge tax burdens the government imposed on the company in the years preceding Mexico’s oil reforms, while lavishing foreign companies with massive fiscal incentives to invest in Mexican oil fields. But there’s an even bigger reason: corruption.

Simple, plain, white-collar corruption. Or what we like to call Petro-Plunder.

There are few better examples of this than Pemex’s disastrous foray into Spain’s ship-building business. In 2013, as Spain’s financial crisis was still biting, the country’s biggest private shipyard, Ballesteros, based in the north-western region of Galicia, was teetering on the edge of bankruptcy. Hundreds of jobs were on the line, at the worst possible time for Galicia’s president, Albert Núñez Feijóo: just before new elections. With the help of Spain’s then-president, Mariano Rajoy, negotiations were quickly arranged with Lozoya, who agreed to let Pemex buy up 51% of the shipyard for for next to nothing (€5 million), but the dodgy fun started then.

Despite having bought a controlling stake in the company, Pemex decided not to exercise any control of the business, preferring to leave that to the other (Spanish) shareholders. It also became Ballesteros’ number one client, ordering the construction of two so-called floatels (hotel-boats for oil rig workers) for hundreds of millions of dollars. One of them, acquired for €175 million, Pemex never even used. The other, Pemex hasn’t used anywhere near full capacity.

In October 2019, Ballesteros went bankrupt once again. Pemex’s current CEO, Octavio Romero, says that the purchase was riddled with irregularities and has filed a complaint for fraudulent administration. Once again, tens of millions of dollars disappeared. Where did they all go?

More importantly, where does the buck stop? Lozoya will likely be extradited to Mexico in the coming weeks, where he will probably end up paying a price of some sort for the crimes he allegedly committed. But attention is already switching to his one-time boss, former Mexican president Peña Nieto, whose government is seen as one of the most corrupt in modern Mexican history.

Peña Nieto’s long-time lawyer, Juan Collado, is already behind bars in Mexico for allegedly laundering more than $120 million through banks in Andorra. Lozoya’s lawyer, Javier Coello, heaped further pressure on the former president this week by stating there is “conclusive” evidence that Lozoya “didn’t manage on his own” the fraudulent activities of which he is accused. “In the purchase of the plants, I can guarantee that the [former] president Peña [Nieto] was well-informed, he was part of the pact,” he said.

Today, Pemex, now the most indebted oil company in the world, is a shadow of its former self. Fitch and S&P cut its credit ratings to junk last year. Average production levels are still sliding and export levels have reached multi-decade lows. The current AMLO government has been seeking to rehabilitate the company and has pointed at a number of promising new finds to develop. And if the government can go some way to reversing the culture of corruption and theft that has plagued Pemex for decades, it may just have a fighting chance.

By Nick Corbishley, for WOLF STREET.