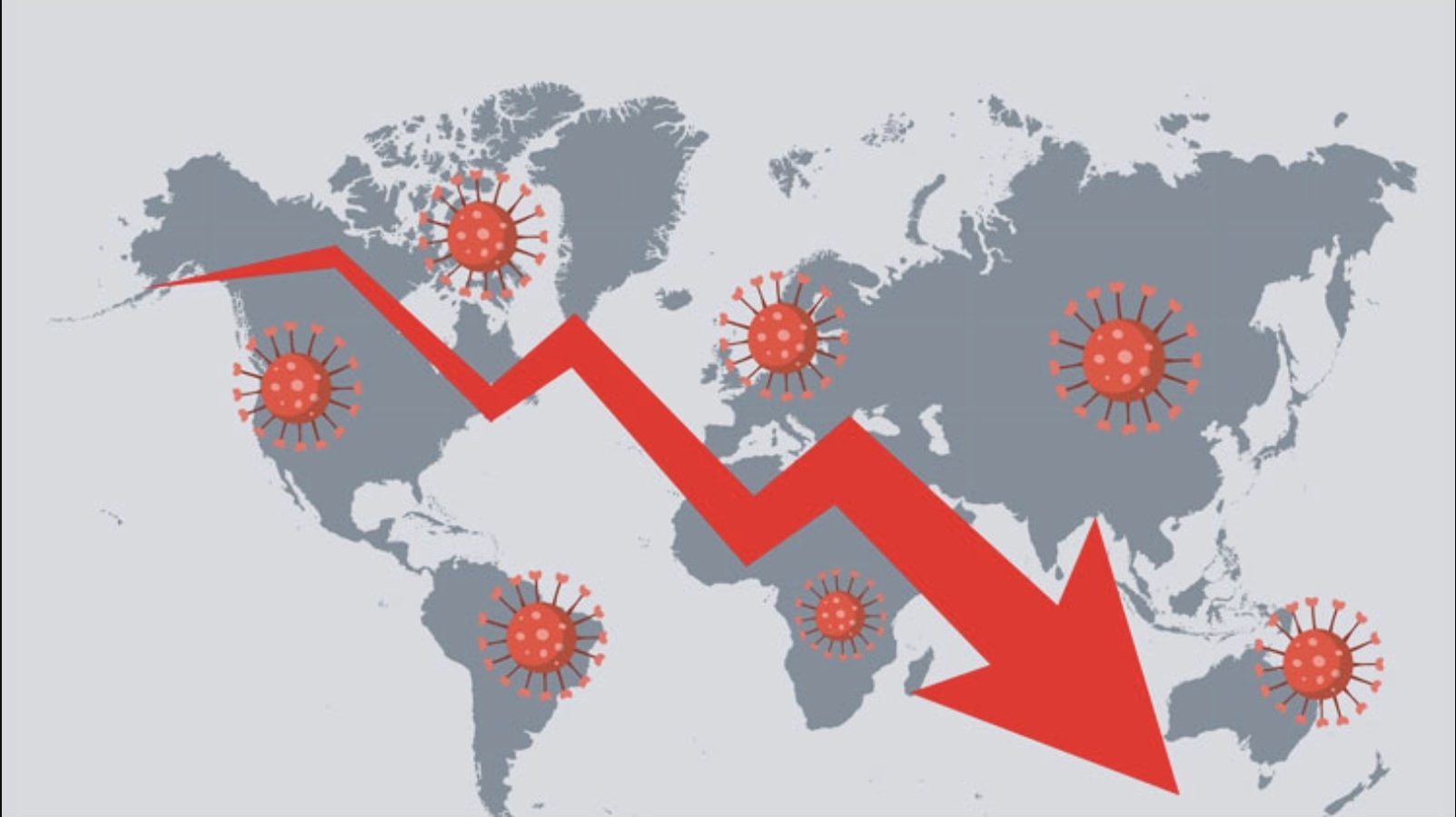 Few weeks ago we reported that, according to the Italian Institute of Health (ISS), only 12% of Italy’s reported Covid19 deaths actually listed Covid19 as the cause of death.

Given that 99% of them had at least one serious co-morbidity (and that 80% of them had two such diseases) this raised serious questions as to the reliability of Italy’s reported statistics.

The way in which we code deaths in our country is very generous in the sense that all the people who die in hospitals with the coronavirus are deemed to be dying of the coronavirus.

Essentially, Italy’s death registration process does not differentiate between those who simply have the virus in their body, and those who are actually killed by it.

Given the amount of fear and panic Italy’s comparatively alarming numbers caused around the world, you would think other nations would be eager to avoid these same mistakes.

Surely all the other countries of the world are employing rigorous standards for delineating who has, and has not, fallen victim to the pandemic, right?

In fact, rather than learning from Italy’s example, other countries are not only repeating these mistakes but going even further.

In Germany, for example, though overall deaths and case-fatality ratio are far lower than Italy’s, their public health agency is still engaging in similar practice.

On March 20th the President of Germany’s Robert Koch Institute confirmed that Germany counts any deceased person who was infected with coronavirus as a Covid19 death, whether or not it actually caused death.

This totally ignores what Dr Sucharit Bhakdi calls the vital distinction between “infection” and “disease”, leading to stories such as this, shared by Dr Hendrik Streeck:

In Heinsberg, for example, a 78-year-old man with previous illnesses died of heart failure, and that was without Sars-2 lung involvement. Since he was infected, he naturally appears in the Covid 19 statistics.

How many “Covid19 deaths” in Germany, fall into this bracket? We don’t know, and will likely never know.

But at least Germany is actually limiting itself to test positive cases.

In the United States, a briefing note from the CDC’s National Vital Statistics Service read as follows [our emphasis]:

It is important to emphasise that Coronavirus Disease 19, or Covid-19, should be reported for all decedents where the disease caused or is presumed to have caused or contributed to death.

“Presumed to have caused”? “Contributed”? That’s incredibly soft language, which could easily lead to over-reporting.

The referenced detailed “guidance” was released April 3rd, and is no better [again, our emphasis]:

In cases where a definite diagnosis of COVID–19 cannot be made, but it is suspected or likely (e.g., the circumstances are compelling within a reasonable degree of certainty), it is acceptable to report COVID–19 on a death certificate as “probable” or “presumed.” In these instances, certifiers should use their best clinical judgement in determining if a COVID–19 infection was likely.

Are careful records being kept to separate “Covid-19” from “presumed Covid-19”? Are the media making sure they respect the distinction in their reporting?

Whenever the alleged casualties are referenced we are fed one large all-inclusive number, without context or explanation, which – thanks to lax reporting guidelines – could be entirely false.

Government agencies all across the UK are doing the same thing.

Northern Ireland’s HSC Public Health Agency is releasing weekly surveillance bulletins on the pandemic, in those reports they define a “Covid19 death” as:

individuals who have died within 28 days of first positive result, whether or not COVID-19 was the cause of death

NHS England’s Office of National Statistics releases weekly reports on nation-wide mortality. Its latest report (Week 12 – March 14th-20th) was released on March 31st and made special mention of Covid19, explaining they were going to change the way they report the numbers in future.

However, with coronavirus deaths, since its a “national emergency”, they are now including “provisional figures” which will be “included in the dataset in subsequent weeks”. This leaves them wide open to – either accidentally or deliberately – reporting the same deaths twice. Once “provisionally”, and then once “officially” a week later.

That’s just one peculiar policy decision. There are many others.

Up until now, the ONS reported those Covid19 numbers collated by the Department of Health and Social Care (DHSC). The DHSC records only those who died in hospital and have tested positive for the coronavirus as Covid19 deaths.

BUT, from now on, the ONS will also include Covid19 deaths “in the community” in their statistics. That “includes those not tested for Covid19” and where “suspected Covid19″ [our emphasis] is presumed to be a “contributory factor”.

Here are some screencaps of the relevant sections: 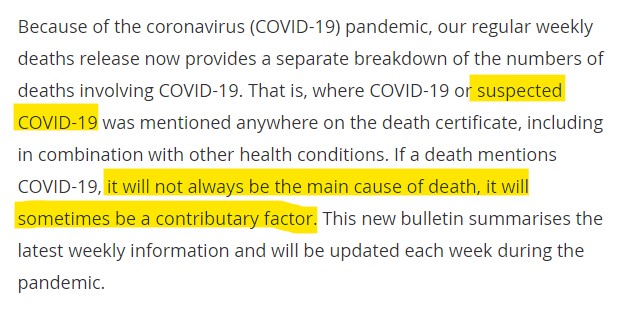 The official NHS guidance for doctors filling out death certificates is just as vague [our emphasis]:

if before death the patient had symptoms typical of COVID19 infection, but the test result has not been received, it would be satisfactory to give ‘COVID-19’ as the cause of death, and then share the test result when it becomes available. In the circumstances of there being no swab, it is satisfactory to apply clinical judgement.

The government is telling doctors it is OK to list “Covid-19” as a cause of death when there is literally no evidence the deceased was infected. That means there are potentially huge numbers of “Covid19 deaths” that were never even tested for the disease.

Further, any possible mistakes will never be noticed or rectified, thanks to recent changes to the law.

Usually, any death attributed to a “notifiable disease” had to be referred to a coroner for a jury hearing.

Under UK law Covid19 is a “notifiable disease”, but the new Coronavirus Bill alters the Coroners and Justice Act 2009, to specifically exempt alleged Covid19 deaths from jury inquests.

Further, according to the office of the Chief Coroner, the Coronavirus Bill means that these deaths don’t have to be referred to a coroner at all, and that medical practitioners can sign off a cause of death for a body they have never even seen:

Any registered medical practitioner can sign an MCCD [Medical Certificate for Cause of Death], even if the deceased was not attended during their last illness and not seen after death, provided that they are able to state the cause of death to the best of their knowledge and belief.

Deaths “in the community” can be listed as Covid19 deaths without being tested for the disease, or even seen by a doctor at all. These deaths will not necessarily be referred to a coroner, and certainly not heard by a jury.

By enacting this legislation the UK government has not only made false reporting of Covid19 deaths more likely, they actively removed the safeguards designed to correct it. Recording accurate fatality numbers in this situation is borderline impossible.

This is, at best, totally irresponsible and at worst incredibly sinister.

Now, before you roll your eyes at the whacky alternate media and their crazy paranoia, the idea deaths are being over-estimated is not a fringe concept or a “conspiracy theory”. It is actually addressed in the mainstream frequently, people just seem to not hear it, drowned out as it is by the fear-inducing headlines.

Dr John Lee, a professor of pathology and retired consulting pathologist with the NHS, wrote in a column for the Spectator:

WHY COVID-19 DEATHS ARE A SUBSTANTIAL OVER-ESTIMATE

Many UK health spokespersons have been careful to repeatedly say that the numbers quoted in the UK indicate death with the virus, not death due to the virus – this matters.
[…]
This nuance is crucial ­– not just in understanding the disease, but for understanding the burden it might place on the health service in coming days. Unfortunately, nuance tends to be lost in the numbers quoted from the database being used to track Covid-19
[…]
This data is not standardised and so probably not comparable, yet this important caveat is seldom expressed by the (many) graphs we see. It risks exaggerating the quality of data that we have.

In fact, Dr Lee goes out of his way to emphasise:

The distinction between dying ‘with’ Covid-19 and dying ‘due to’ Covid-19 is not just splitting hairs.

The BBC dealt with the same issue in an article on April 1st [again, emphasis ours]:

The death figures being reported daily are hospital cases where a person dies with the coronavirus infection in their body – because it is a notifiable disease cases have to be reported.

But what the figures do not tell us is to what extent the virus is causing the death.

It could be the major cause, a contributory factor or simply present when they are dying of something else.

These absurd rules contributed to this recent example, referenced in the BBC article, but not widely reported at the time:

An 18-year-old in Coventry tested positive for coronavirus the day before he died and was reported as its youngest victim at the time. But the hospital subsequently released a statement saying his death had been due to a separate “significant” health condition and not connected to the virus.

This story is completely true. The boy was widely reported as the UK’s “youngest coronavirus victim” on March 24th, before the hospital issued a statement saying:

[The hospital] had tested for COVID-19 on the day before he died, but this was not linked to his reason for dying.

Despite the hospital correcting the press, the case was still being reported in the tabloids a week later on March 31st.

However, the important detail here is being lost: Going by the current NHS rules, despite the hospital officially saying it was not his cause of death, this boy is still part of the official coronavirus fatality statistics.

How many more people fit that profile? We will never know.

That’s five different governments, across four countries, all essentially saying it’s OK to just assume a patient died of Covid19, and then add that to the official statistics.

Is that really responsible practice during a potential pandemic?

Are any other countries doing the same?

To what extent can we trust any official death statistics at all, at this point?

As Dr Lee points out, Covid19 is not a disease that presents with a unique – or even rare – collection of symptoms. The range of severity and type of presentation is in line with literally dozens of extremely common respiratory infections.

You cannot see “fever” and “cough” and then diagnose “probable covid19” with even the slightest chance of accuracy.

This has become one of those nuggets of information we all know by heart, but between 290000 and 650000 people die of flu, or “flu like illness”, every year. If just 10% of those cases are incorrectly assumed to be “probable” coronavirus infections, then the fatality numbers are totally useless.

At a time when good, reliable information is key to saving lives and preventing mass-panic, global governments are pursuing policies which make it near-impossible to collect that data, whilst stoking public fear.

Due to these policies, the simple fact is we have no reliable way of knowing how many people have died from this coronavirus. We have no hard data at all. And governments and international organisations are going out of their way to keep it that way.

It’s time we started asking why.