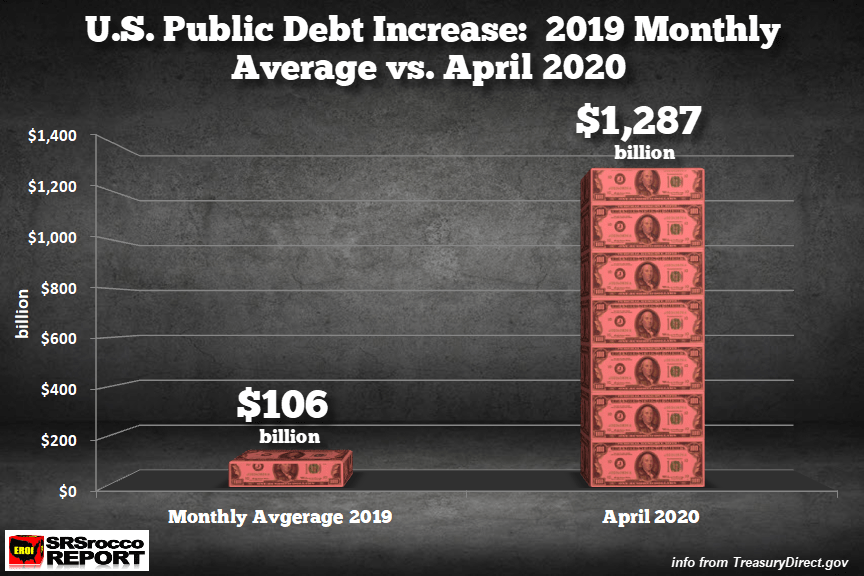 The U.S. public debt increased at the fastest rate ever during April.  Due to the negative economic impacts stemming from the global contagion, the U.S. Treasury increased the federal debt by a whopping $1.3 trillion in a single month.

The additional $1.3 trillion of U.S. public debt during April would purchase approximately one-third of all the physical gold investment bullion in the world, which currently stands at $4.1 trillion. In just one month (April), Uncle Sam’s printing press or digital monetary liquidity could purchase 750 million oz of gold.  That 750 million oz of gold would be 67% of the total Central Bank Gold Reserves.

So, at some point, the Fed and central bank monetary insanity will come back to BITE THEM HARD… LOL.

According to the data from TreasuryDirect.gov, the U.S. public debt increased by $1,287 billion ($1.28 trillion) during April:

While it took twelve months for the U.S. Treasury to add $1,207 billion in debt (2019), it only took one month to increase it to $1,287 billion (April). I don’t believe Americans understand how much damage is being done to the U.S. Government Balance Sheet.  Unfortunately, it’s only going to get worse going forward.

It is impossible to forecast the collapse of the U.S. Bond Market or U.S. Dollar. However, the current monetary policy taking place suggests that it’s going to be SOONER rather than LATER.

And, it’s all due to the Collapse in U.S. oil demand. Keep an eye on the U.S. Oil Industry and oil price for clues how quickly the domestic economy and financial system will head into a depression.