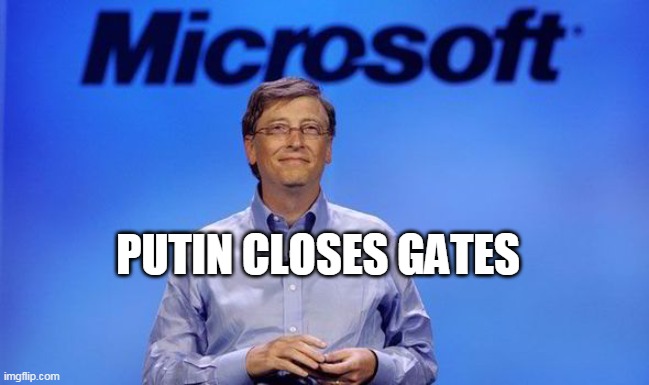 THE CARING PEOPLES PAPER  Please publish our stories and share them on social media. We are dependent upon donations. Never miss a story: Follow My Blog right-hand column scroll down Visitors welcome to visit  BOOKS or BUY FROM  AUTHOR   [email protected]

Russian President Vladimir Putin has outlawed Microsoft’s Bill Gates and his corporation. Furthermore, both culprits have been placed on a Federal Security Service watch list due to ‘concerns over security and reliability.’

The removal of all Microsoft software has now begun in Russia with immediate effect. Government spokesman Sergei Zheleznyak explained that Microsoft had been caught carrying out minute-by-minute surveillance on millions of Russian citizens, as well as citizens of other countries.

The report sets out Russia’s concerns: ‘The US, which presents itself as a bastion of democracy, has in fact been carrying out minute-by-minute surveillance of tens of millions of citizens of Russia and other countries.’

‘All the main internet companies that were formed in the US are involved in this ugly story, and these companies operate on the territory of our country,’ said the Kremlin spokesman.

Microsoft founder Bill Gates’ being placed on a Federal Security Services (FSB) watch list has also been raised for a revue, pending further investigation, with expectations in the Kremlin that he will join George Soros and Jacob Rothschild on the Russian Federation’s blacklist.

Bloomberg reported that Artem Ermolaev, head of information technology for Moscow, and Russia’s Communications Minister Nikolay Nikiforov, stated that Moscow will initially replace Microsoft Exchange Server and Outlook on thousands of computers with an email system developed by the Russian company Rostelecom PJSC.

Next year, it will install software developed by New Cloud Technologies, another Russian software vendor, on millions of systems. Even Microsoft Office and Windows will be replaced with home-grown versions, Ermolaev said.

‘We want the money of taxpayers and state-run firms to be primarily spent on local (Russian) software,’ Nikiforov said, adding that starting next year, officials ‘will be tightening their grip’ on state-run institutions that do not opt for domestic alternatives.

MICHAEL WALSH is a worldwide journalist, broadcaster and author of 64 book titles with 36 years experience. Like other journalists of integrity, he no longer writes for corporate media, opting instead for true journalism.