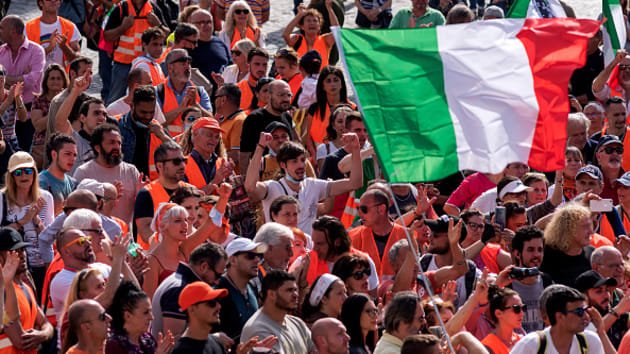 Remember the “yellow vests” movement that brought France to a standstill in late 2018? Now, Italy is seeing its own grassroots, anti-government, populist movement: the “Orange Vests” or “Gilet Arancioni.”

Hundreds of protesters wearing orange vests or jackets gathered in Rome on Tuesday, chanting “Liberta’!” (“Liberty!”) to protest the government’s handling of the coronavirus crisis and calling for it to resign.

Described as a “rightist-libertarian” and “turbo populist” movement by the Italian media and modeling themselves on the yellow-vested anti-government movement seen in France, the leader of the Orange Vests, former Carabinieri Gen. Antonio Pappalardo, has said that the coronavirus pandemic did not exist.

“The pandemic does not exist, it’s total bulls—,” Pappalardo told a rally in Bari on Sunday, Italian news agency ANSA reported. “The coronavirus is not lethal, it only kills the already sick over 80s. Enough with the lies and falsehoods, you have terrified the Italian people.”

Similar demonstrations were seen in Milan and small rallies in other regional capitals at the weekend. Speaking to a crowd of orange-vested supporters on Tuesday in Rome’s Piazza del Popolo — many of whom were defying a government order to maintain social distancing and to wear masks in busy public spaces — Pappalardo made similar claims, alluding to a high-profile doctor who said this weekend that the virus “no longer exists clinically.”

“Now virologists also say that this coronavirus is nonsense,” Pappalardo told the crowd as he argued against the use of masks. In addition, Pappalardo called for Italy to return to using its former currency, the lira.

La Repubblica newspaper reported Wednesday that protesters ranged from people who were dissatisfied with the government’s response to the coronavirus crisis, many of whom have lost their jobs, to some far-right activists and euroskeptics. It quoted protesters voicing their feelings of disenfranchisement and opposition to immigration.

There’s no doubt the coronavirus has hit hard in Italy, whose economy was already fragile and largely based on small and medium-size enterprises, many of which are family-run.

The coronavirus in Italy emerged in the wealthy north in late February. In early March, the government, led by Prime Minister Giuseppe Conte, instigated a strict lockdown that saw all but essential food stores and pharmacies close, hurting livelihoods across the country.

Restrictions continue to be lifted in Italy and on Wednesday inter-regional travel, as well as travel to and from other European countries, is being permitted for the first time in months. Italy has reported over 233,000 coronavirus cases and 33,530 deaths, according to Johns Hopkins University. Worldwide, there have been over 6.3 million cases and at least 380,000 deaths.

The Orange Vest protests came after another anti-government demonstration there by Italy’s center-right political opposition, led by Matteo Salvini, the leader of the euroskeptic Lega party.

Flanked by the rightist Fratelli d’Italia leader Giorgia Meloni and Antonio Tajani from the Forza Italia party that is led by former Italian Prime Minister Silvio Berlusconi, and most wearing masks, the demonstrators carried a 500-meter Italian flag to Piazza del Popolo and called for the government to resign.

Writing for Il Giornale newspaper, journalist Vittorio Macioce said the Orange Vests and right-leaning opposition should not be confused.

“The orange and related vests, and everything that can come from the disillusioned and desperate crowds, has nothing to do with Salvini, Meloni and even less Berlusconi. It’s another story,” he wrote late Tuesday.

“It is something that at this moment it is even difficult to interpret. … It may be nothing, the farce that breaks through the tragedy and goes away without leaving a mark. Or something that takes strength, infects, finds an unknown leader more charismatic and intelligent than those around, and then all this ends up unhinging the pillars of democracy and freedom.”