Prepare For Change
Home ARCONTES “V-Shaped” Recovery Not Now: It Gets Worse, 30.55 Million on Unemployment. Week... 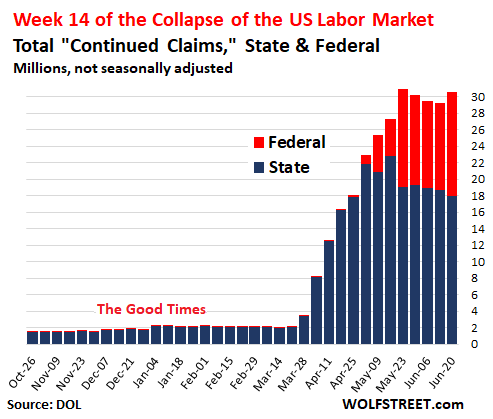 The total number of people who continued to receive unemployment compensation in the week ended June 20 under all state and federal unemployment insurance programs combined, including gig workers, rose to 30.55 million people (not seasonally adjusted), according to Labor Department data this morning. This is up by 1.3 million people from the prior week (29.26 million), and the second-highest ever, just below the record during the week ended May 23. V-shaped recovery not now:

Even while workers in restaurants, bars, retail stores, hotels, hair salons, etc. are getting called back to work, it’s corporate jobs that are getting axed now. Layoffs at small companies happen quietly, and we rarely see them in the news. But layoffs at big companies make the news, such as Macy’s announcement today that it will lay off 3,900 staff in corporate and management areas, even as it’s bringing back store employees. This is one of the ways in which the unemployment crisis is shape-shifting.

Not seasonally adjusted, 1.457 million initial claims under state programs were processed in the week ended June 20, up from 1.433 million initial claims a week ago. These are newly laid-off people who filed their initial unemployment claims that week. While a fraction of the 6-million range in late March, it is still more than twice the magnitude of the spikes during the prior unemployment crises in 1982 and 2009. 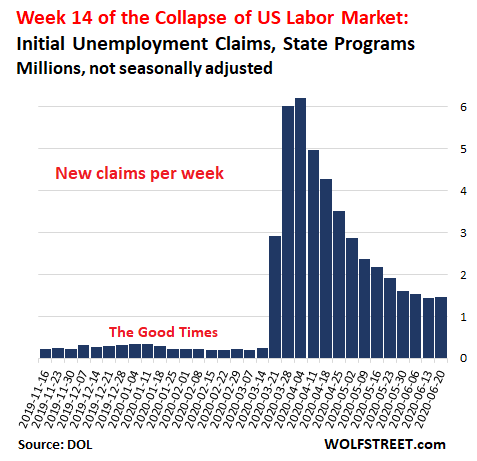 This decline in continued claims under state programs shows that more people who’d received state unemployment benefits were called back to work than people were newly laid off.

Under Pandemic Unemployment Assistance (PUA), which covers gig workers, 728,120 initial claims were processed by 46 states in the week ending June 20.

Four states still have not figured out how to process these federal claims – down from six states last week. Eventually, they will figure it out, which will boost PUA claims. These four states are:

In total, 11.046 million gig workers continue to receive unemployment compensation for at least one week under the PUA program, up by 1.76 million from 9.374 million a week earlier. Gig workers now account for 36% of total state and federal unemployment rolls.

But 14 states have not yet processed any claims under the PEUC program, including, Florida.

Why I use “not seasonally adjusted” data?

I switched to reporting only not-seasonally adjusted data for unemployment claims weeks ago for three reasons:

What does all this mean?

Despite the deterioration in “continued claims” under state and federal programs, I’m still fairly confident that in sheer numbers of UI claims, the unemployment crisis bottomed out in May. But there are some complicating issues and shifts….

Seasonal factors. A small part of the damage we saw today was due to seasonal factors – meaning they’re real layoffs but they happen every year during this week in June – according to the Labor Department. Based on seasonal factors, the Labor Department “expected” an increase in initial claims of 53,913 from the prior week. The actual increase was 24,346 claims. So in the DOL’s theory, and rounded as it does, this week’s initial state claims showed a seasonally adjusted “28,000” improvement over the prior week. Be that as it may.

The shape-shifting crisis: Retail and restaurant employees, and some hotel employees, are getting called back while corporate jobs are disappearing. This trend will continue. Big companies, including airlines, have already announced layoffs for the coming months.

States and municipalities are slow in laying off people, but the process has started. Budgets are in terrible shape, and everyone is counting on a federal bailout. But layoffs or shortened work hours, or partial furloughs (such as four days a month) are now being worked on around the country. Some of them have already happened. Many of them are well-paid jobs.

Beyond the official Data Chaos: Now there are 30.55 million people officially getting paid unemployment insurance, and they remained unemployed, and they’re looking for a job, according to the DOL today.

If all claims had been processed under all programs, the total on the unemployment rolls might be over 31 million. This would amount to over 19.6% of the labor force. In other words, the unemployment rate based on those on those receiving state or federal UI would be 19.6%.

In addition, there are people who lost their work who are not eligible for any unemployment benefits. And when they’re added to the total unemployed, the unemployment rate goes over 20%.

This is far higher than the nonsense the Bureau of Labor Statistics reported for May (13.3% without error, and over 16% with error). The BLS has simply fallen off the deep end with its unemployment reporting.

The entire market of 3,451 stocks minus the “Giant 5” is down 1% from Jan 2018. But wow, the volatility! You would have been better off with a despicable freaking savings account. Read… Wild Ride to Nowhere Since Jan 2018: What the US Stock Market Looks Like Minus APPL, MSFT, AMZN, GOOG, FB