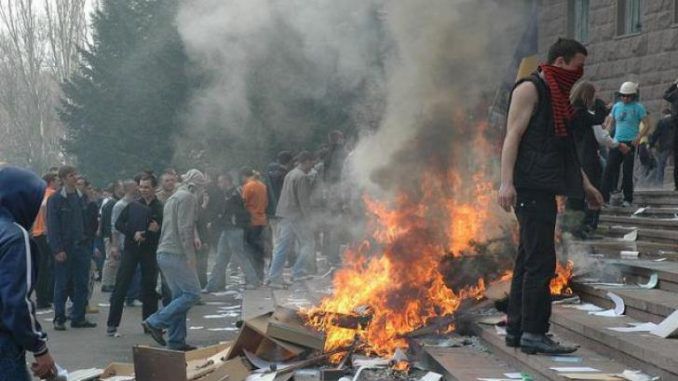 A recent survey by Rasmussen Reports found that 34% of likely U.S. voters think a second Civil War is coming within the next five years.

Rasmussen asked the same question two years ago and found that 31% of those surveyed thought a second Civil War was likely.

In the latest poll, 9% of American voters said a second Civil War is very likely. Two years ago, 11 percent thought such a conflict was very likely.

The new poll found that 40% of Republicans, 28% of Democrats and 38% of non-aligned voters expect that a second Civil War will become a reality.

The poll found wide disparity in how respondents see the removal of Confederate symbols.

Although 39% of those responding said removing Confederate symbols will help race relations, 27% said it would hurt, and 28% thought there would be no impact.

When Rasmussen asked the question in 2017, it found that 28% said removing Confederate symbols would be good for race relations while 39% said it would hurt.

Fault lines of race and political philosophy separate Americans, according to the new poll.

The survey suggested that 54% of black respondents said ridding the nation of Confederate symbols would help race relations, a view shared by only 36% of whites.

The Dems were far more bullish than anyone on wiping away the Confederacy’s legacy, as the poll suggested. 64% of Democrats said getting rid of Confederate symbols would help race relations, but only 19% of Republicans felt that way.

The new survey also found that 50% of Americans who think trying to erase the Confederacy from view would hurt race relations believe Civil War is likely within the next five years.

As for the protests gripping the nation since the police killing of George Floyd last month, 37% of poll respondents said that those protests will lead to long-term change in relation to racism, while 31% disagree and 32% aren’t sure.

However, only 29% of black Americans surveyed said they expect such a change from the current protests.

Rasmussen conducted the survey of 1,000 likely voters between June 11 and June 14. The survey has a margin of error of 3 percentage points.

Debating Confederate symbols is a big issue for Williamson County in Tennessee, where the battlefield of the 1864 Battle of Franklin is located and where the Confederate flag is on the county seal.

Resident Robert Blythe said he is opposed to removing the symbols.

“As a father with two young girls, I want them to grow up to love history and show appreciation for history and the past — good and bad — so you can understand it,” he told the Williamson Herald. “When you start sanitizing everything … you lose a lot by doing that.”

“My point is, where does it end?” Blythe added. “If people cave and try to appease, it’ll never work because … if somebody in the past was wrong, it’ll never end because everybody is imperfect, including the people that came before us. So, instead of learning from the past, we’re trying to sanitize everything, and I don’t think that’s a good thing at all.”

“While the flag of the Confederacy has a place, it is not on the seal that represents all of Williamson County,” he told the Herald. “I have received emails from residents with strong feelings about keeping the seal as it is, but I simply cannot support or condone this as the representation of Williamson County’s history on its seal.”