Prepare For Change
Home Uncategorized Netanyahu will soon fade out, and it’ll all be over soon enough 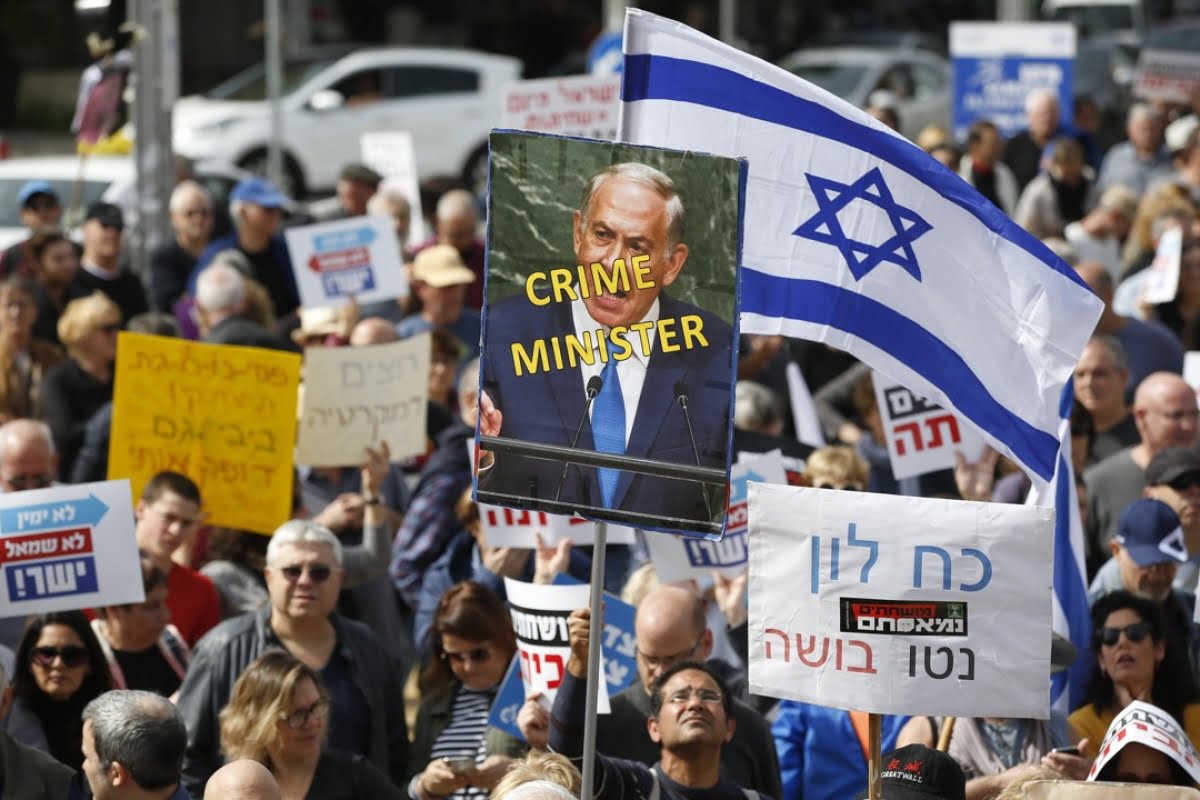 Netanyahu – he and his Sara and their Yair – will lose what they have left of control, restraint, responsibility and fairness.

The protests won’t stop. They’ll continue gaining more power and energy and in the end, they will succeed where the elections, political parties, polls and all the people who dreamed of reaching Balfour Street failed. The person who knows this best, and who knew it sooner than anyone else, is Prime Minister Benjamin Netanyahu. Many people believe that Bibi is playing a clever game of chess at one of the highest levels. I highly doubt that.

Netanyahu is first and foremost an actor. An extremely talented actor, perhaps even ingenious I would venture to say. He performs more than theater or film actors do. Hardly a day goes by when he doesn’t give one of his famous performances.

Sometimes they’re on the radio or TV, other times they’re spontaneous (or planned) gatherings with his supporters. Bibi also likes to take advantage of cabinet meetings and speeches in front of the Knesset plenum as stages for his performances, which require protracted preparations, including makeup, hairstyles, picking out the appropriate clothing and, of course, gathering an audience.

Netanyahu painstakingly and seriously prepares for each performance with admirable professionalism. All of these efforts  – joined together with his natural talents – lead to a supreme performance. Like other great actors, he knows how to identify the most precise feelings of the people in his audience.

Like Laurence Olivier – one of the greatest film and theater actors of the 20th century – Netanyahu understands how to recognize even the most subtle vibrations, tired looks, eye and hand movements, when people are trying not to display their restrained nervousness and growing impatience. Netanyahu is more sensitive to these innuendos than all the commentators, experts and analysts. In time, they will all realize that this is true. They just need one more big demonstration, one more protest to march through the city streets, one more rowdy gathering across the street from the prime minister’s house. In the end, all of the commentators will finally understand the situation Netanyahu has been facing for some time.

He knows that most of the public is not as supportive of him anymore; Netanyahu has lost their support. That part that makes the difference he already lost. The rest will continue protesting over the next few weeks. Like others who came before him, Netanyahu thinks he’s a magician. He’s succeeded in keeping everyone’s attention as he continuously juggles all the balls without letting even one ball plummet to the ground. Even in those moments when it seems like he’s about to lose control and drop one of the balls, at the last second he catches that rebellious ball and flings it back into the air. All the while, he’s kept his gaze steady and focused as he juggles the balls, until at some point they must come crashing down.

WHEN THE balls drop; the magic expires. Suddenly, it turns out that the magic isn’t capable of accomplishing everything. Or that actually, there never really was any magic after all. Maybe he was just pulling the wool over our eyes. You can fool a large portion of the public for a very long time. You can fool everyone for a certain amount of time, too. As former US president Abraham Lincoln is famous for saying,  “but you cannot fool all the people all the time.” Now, Netanyahu also understands this and certainly some of the eunuchs serving him feel this too. Soon, they too will react. The hardest, most painful reaction of all will come from his fans who are just now being released from the illusion of the magic and discovering that the king actually was naked all along. At first, this discovery is received with disbelief.

It’s not possible that this is the man who we thought was omnipotent, who is capable of doing every kind of magic trick, who knows how to touch the most sensitive points of each and every one of his admirers. According to the accepted public language he is, in fact, a charlatan who lacks courage. He’s cowardly, hesitant and lacks even the most minimal amount of loyalty to those closest to him. Suddenly, the hero of the public’s stormy fantasies is standing right in front of us, his disgrace and weakness exposed. When this happens, there is no forgiving. There’s nothing crueler than the disappointment in those who have deceived us.

This is usually the most dangerous stage in terms of the reaction expected from the person who is suddenly losing the public’s sympathy. Netanyahu is in this position exactly now. He’s not fallen to the ground yet, and might still believe that he has a magical power.

We’re so close to the stage in which events will proceed at a dizzying pace, and at some point we will lose control. For now, events are still pretty minor. Against the prime minister’s recommendation, the Knesset Coronavirus Committee decided to open swimming pools and gyms, and the chairwoman of the committee got fired for countering orders. Any day now, the haredi neighborhoods could be put on lockdown, at which point it might become clear that Deri, Litzman and Gafni are not actually in Netanyahu’s pocket.

Two days from now, the Blue and White Party will insist on upholding the agreement that requires the submission of a biennial budget and Netanyahu will need to decide if he will obey the strange and delusional law upon which he says the government was built. Or, will he let the government fall apart and lead us to a fourth round of elections? Will he be tempted to do this? Will he succeed in preventing the crash that he already knows (and that the polls are also telling him) is in full swing? Will he push onwards at full throttle, only to crash alongside his disturbed family and the last of his loyalists?

There’s no way to foresee how this vortex will develop. One thing is beyond all doubt: We are already becoming dizzy from the winds that are blowing from a multitude of directions and threatening to sweep us all away with them.

At this point in time, many things could happen that would end in disaster. For some time now, Netanyahu has been acting out of fear that is threatening to shatter the royal mantle that has been protecting him and his family for years. He’s willing to do just about everything to keep this package intact, without which his life, the life of his wife Sara and the life of his son Yair will be no lives at all.

This mantle is Balfour. Everything that Balfour symbolizes for the public and everything that Balfour means to this strange family – in their eyes – Balfour is the imperial palace, the defensive wall between us and them, most of whom are enemies, evil haters of the state, dangerous leftists who must be fought against so that they don’t get too close. Balfour is the motorcade of cars with flashing blue lights. Balfour is all the secretaries, assistants, cleaners, gardeners, the pool and the water that fills it, the presents, the champagne bottles that the prime minister is allowed to receive as presents from friends, and the jewelry he demands be bought for his wife.

Now, it’s suddenly becoming clear to Bibi how great the distance is between all of this and the loneliness that’s harder than practically anything else in the world. There’s a big gap between Balfour and a life without servants, assistants, secretaries, cleaners and gifts; the gap that opens between that and living a regular life where you need to wake up in the morning and fight against all the threatening black forces. This gap is getting smaller and smaller. Soon, this mantle will disappear completely, and everything will be destroyed, and there will no longer be any point to life.

This is the time when disasters take place that alter the lives of people and countries. These are the moments when people like Bibi who’ve lost their direction and control and are no longer able to set the daily agenda, that they do the most crazy and dangerous things from where there is no way back.

This is where we are now. The moment of truth has arrived. The protests will continue to drag on and intensify and no bribe of state funds can put a stop to it. You can’t buy trust with money and you can’t gain loyalty with tricks. Once you’ve been deemed untrustworthy, it’s nearly impossible to regain people’s trust.

Now, we must be careful and protect ourselves. The protests will continue moving forward; they should be angry, but quieter; aggressive, but non-violent; ongoing, but not breaking through any fences. Freedom of expression will not be blocked. No police can block it and the Israel Police will certainly not try to do so.

At the end of the day, the police are us and our neighbors and our friends. And even when police officers make mistakes and sometimes their response is a little more violent than was strictly necessary, they still come from our community. And when they go home, their home is exactly like our home.

When the entire public – with an emphasis on entire – comes out and stands in front of the house on Balfour Street, we must not lose control and get dragged into actions that could push us over the edge. Netanyahu – he and his Sara and their Yair – will lose what they have left of control, restraint, responsibility and fairness. Then it will all be over. It will suddenly be clear that Bibi is no longer. All the rest will work itself out as things always do.

And we’ll survive COVID-19 as well.

The writer was the 12th prime minister of Israel.

Why Wokeism Is A Religion

The Line Has To Be Drawn Somewhere

Germany: Govt Reports 96% of Omicron Cases Are Among Fully Vaccinated,...