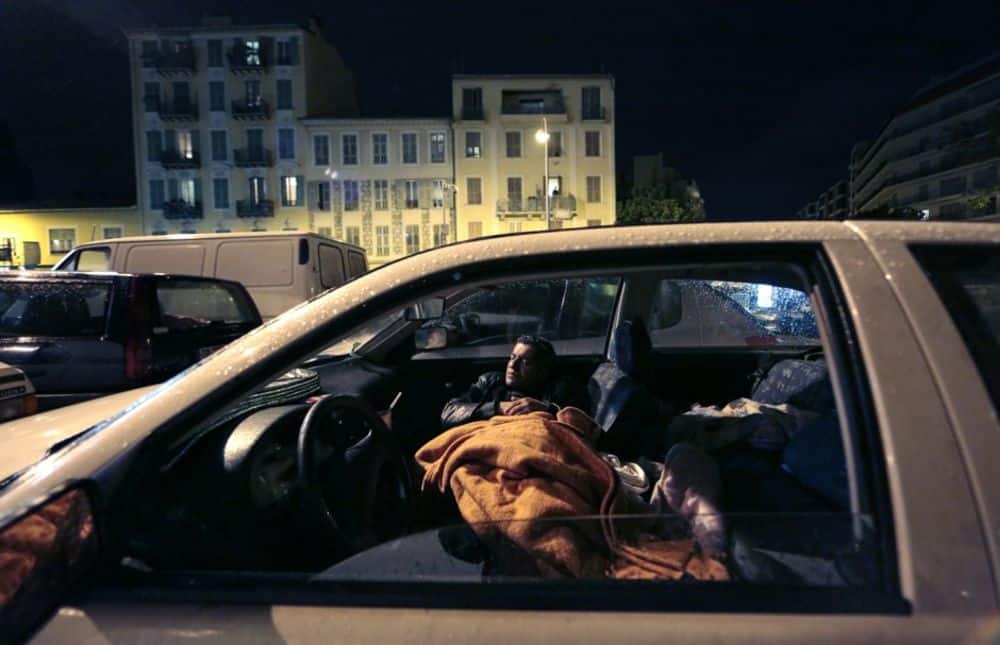 It just doesn’t let up. An astounding number of newly laid-off workers keeps filing for unemployment benefits week after week and pile on top of the people already unemployed. And the number of people who started working again isn’t big enough to make a visible dent in the curve.

In the week ended July 18, the total number of people who continued to claim unemployment compensation under all state and federal unemployment insurance programs, including gig workers and contract workers, edged down to 31.8 million (not seasonally adjusted), as reported by the Department of Labor this morning. It was the third highest level ever and just a tad off the peak: 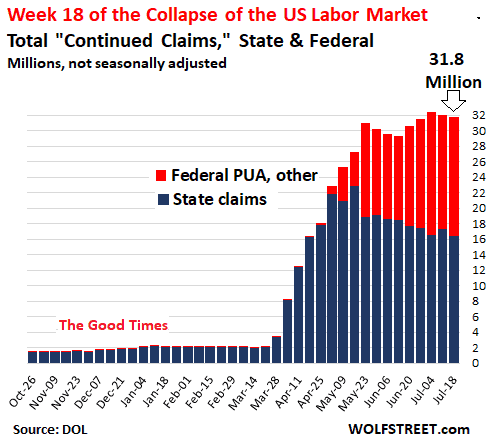 Unabated lazy misreporting in the media.

If you read this morning or heard on the radio that 16.2 million people were claiming unemployment insurance – the “continued claims” – and you thought that there were only 16.2 million people who claimed unemployment benefits, you fell victim to lazy misreporting in the media, by reporters or bots that didn’t read the Labor Department’s press release beyond the second paragraph.

Those 16.2 million were only the claims under state programs, and do not include the claims under federal programs. All combined, there were 31.8 million people on the unemployment rolls. That’s what the Labor Department reported further down in the press release.

There is a huge difference between 16.2 million and 31.8 million unemployed people!

The issue is that the claims under federal programs are new, established by the CARES Act, and the Labor Department just inserts them further down in the press release, and then it provides a total of state and federal claims further down – the 31.8 million – instead of putting the total in the first line of the first paragraph so that even lazy reporters or lazily programmed bots, who’ve for years reported only the first two paragraphs, can see it.

I have been reporting the total provided by the Labor Department every week since May. By May 28, I first used a version of the chart you see above, while the WSJ, CNBC, Bloomberg, and others continued to misreport the data.

The total is now slowly cropping up, perhaps under pressure from yours truly. Bloomberg today put it in the last paragraph, and you had to read through a whole lot of blah-blah-blah to get it. Over the weekend, the WSJ ran an article that for the first time that I know mentioned the total and even included a chart of the total that looked like mine, based on old data. This morning, the WSJ failed to report the total and didn’t show its own chart of the total. It just showed two charts of state claims. What I heard this morning on NPR was painful. In past weeks, they have under-reported actual unemployment claims by nearly half!

And even today, you still cannot see the headline number – 31.8 million people claiming unemployment benefits under all programs – in the financial MSM headlines!

Seasonal adjustments have gone haywire. So months ago, I switched to “not seasonally adjusted” data.

So months ago, I shifted to reporting only “not seasonally adjusted” unemployment data. Today I will point out the differences.

Seasonally adjusted: 1.42 million newly laid-off people filed their initial unemployment claims with state unemployment offices in the week ended July 18. This was up from 1.30 million in the prior week, and the highest in four weeks. There was some hand-wringing in the media over that increase.

Not seasonally adjusted: 1.37 million newly laid-off people filed their initial unemployment claims with state unemployment offices in the week ended July 18. This was down from 1.51 million in the prior week, and the lowest so far in this crisis.

Yes, there are some seasonal factors affecting unemployment claims, but the method to calculated them was not designed to deal with these huge numbers. So I will stick to “not seasonally adjusted” claims data.

Over the past six weeks, there has been essentially no improvement, and the number of newly laid-off people has remained at a gut-wrenching high level: 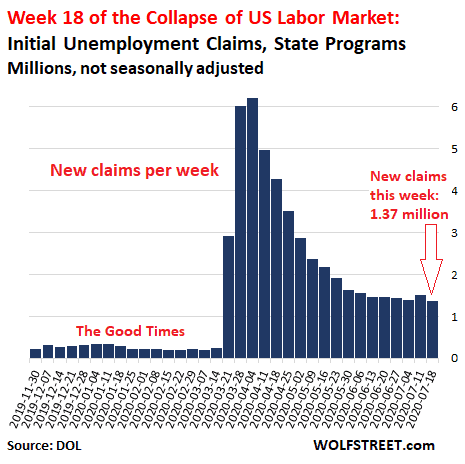 The number of insured unemployed under state programs declined this week to 16.4 million (not seasonally adjusted), after having increased last week. These people are represented by the blue columns in the first chart above.

The total number of people claiming benefits under the PUA program declined to 13.18 million, from 14.28 million last week, as more workers that had been receiving PUA benefits were dropped from the rolls, likely because they’d started working again.

Pandemic Emergency Unemployment Compensation (PEUC): 940,113 continued claims, about flat with the prior week. PEUC covers people who don’t qualify for other programs.

These continued claims under the PUA and PEUC programs, plus workers under programs for federal employees and newly discharged veterans, plus workers covered by all remaining programs are represented by the red columns in the first chart above.

There are numerous factors that overstate and understate the actual number of unemployed, and we’re not able to pin them all down. I mentioned seasonal adjustments as one of those factors.

But there are also fraudulent claims that overstate claims data. And then there are claims that have been denied for various reasons, often due to mismatched information from the employer that take weeks or months to sort out. And they would understate unemployment. Then there are states that still don’t process all federal claims. And even states that do process them, do so inconsistently. Then there are people who don’t qualify for unemployment insurance, and when they lose their work, they don’t count here at all.

But give or take maybe 1 million people, the total number of unemployed still hovers around 32 million. That’s the number to go by, not the fallen-off-the-cliff nonsense produced these days by the Bureau of Labor Statistics in its now ludicrously distorted survey-based jobs report.