Prepare For Change
Home ARCONTES After months of condemnation for no lockdown, Sweden’s COVID deaths drop to... 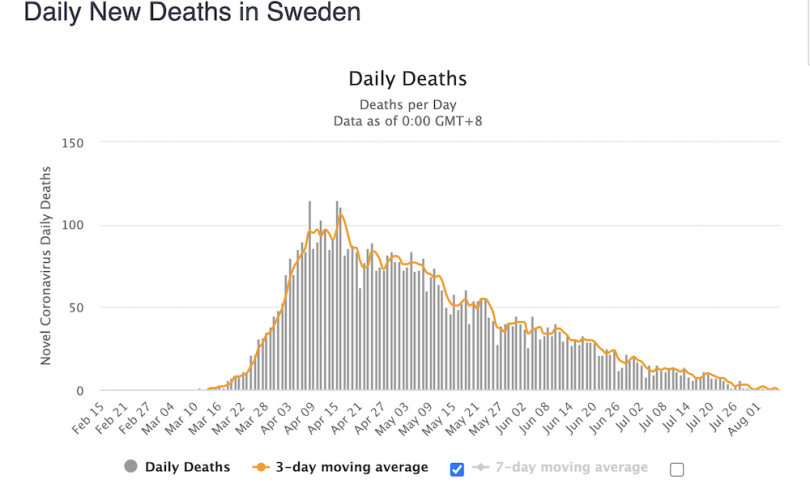 Unlike many nations, Sweden never shut down its schools or economy and did not restrict individual freedoms to nearly the degree seen in the United States and much of Europe.

As heated debate continues over the emergency measures taken around the world to limit the spread of COVID-19, new data suggest Sweden’s oft-derided approach of not locking down may have paid off in the long run.

The country of 10 million people has seen a total of 82,972 infections and 5,766 deaths. Unlike many nations, it never shut down its schools or economy and did not restrict individual freedoms to nearly the degree seen in the United States and much of Europe.

Sweden’s leaders faced a steady drumbeat of international condemnation as deaths curved upward from April through June, though the curve flattened in July. Daily deaths fell to the low thirties in mid June, and have been in single digits since July 20.

Are we just going to ignore the fact that Sweden never issued stay-at-home orders, kept schools open, didn’t close businesses and the general public does not wear masks…

…and the entire country is down to LESS THAN 1 DEATH per day from COVID-19. pic.twitter.com/J953lGhWGc

In April, Swedish epidemiologist Anders Tegnell explained to Nature magazine that Sweden started from the understanding that COVID-19 “is not a disease that can be stopped or eradicated…until a working vaccine is produced,” and that widespread lockdowns would be incompatible with Swedish laws, which “are mostly based on voluntary measures — on individual responsibility.”

“Closedown, lockdown, closing borders — nothing has a historical scientific basis, in my view,” Tegnell said. “We have looked at a number of European Union countries to see whether they have published any analysis of the effects of these measures before they were started, and we saw almost none.”

Notably, Tegnell also acknowledged that Sweden “underestimated the issues at care homes, and how the measures would be applied. We should have controlled this more thoroughly.” This was the same error infamously made in New York, suggesting that Sweden’s overall early outlook was disproportionately impacted by nursing home deaths.

Although Sweden did not implement a draconian lockdown, nor did its general population suffer terrible infection rates, it has been accused of committing “active euthanasia” on its elderly coronavirus patients.

Nursing homes in the Nordic country have been accused of denying their patients basic medical care including food and water and giving them respiratory-inhibiting drugs like morphine and midazolam.

Latifa Löfvenberg, a nurse in Sweden, said, “People suffocated, it was horrible to watch. One patient asked me what I was giving him when I gave him the morphine injection, and I lied to him.”

“Many died before their time. It was very, very difficult.”

“Regarding its medical facilities, the Scandinavian country’s approach was to keep hospital intensive-care units from being overwhelmed with elderly patients who had a low chance of surviving and thus keep them open for younger people should a surge in the virus occur. Such a surge did not happen and the elderly were denied access to unused facilities,” reported the Christian Post.

“They told us that we shouldn’t send anyone to the hospital, even if they may be 65 and have many years to live. We were told not to send them in,” according to Löfvenberg.

The Christian Post noted, “Those suspected to have COVID-19 were quickly placed on palliative care, given morphine, and denied supplementary oxygen and intravenous fluids and nutrition.”

“For many residents, this was essentially a death sentence.”

The Swedish Public Health Agency said that “48.9% of deaths were care home residents up to and including 14 May,” the BBC reported that month.

While numerous international headlines have recently begun expressing openness to the possibility Sweden’s non-lockdown overall strategy paid off, other reports still urge skepticism. The Hill health writer Chia-Yi Hou writes that “we will never know if doing more would have actually helped.” MedPage Today quotes doctors attributing the results to variables such as Swedes spending more of their summer outdoors.

Sweden not locking down appears to have also benefited the country economically. While the country’s second-quarter GDP dropped an historic 8.6%, CNBC reports, it still fared much better than others declines in Europe, such as Spain (18.5%), Portugal (14.1%), France (13.8%), and Germany (10.1%), as well as the overall European Union decline of 11.9%.