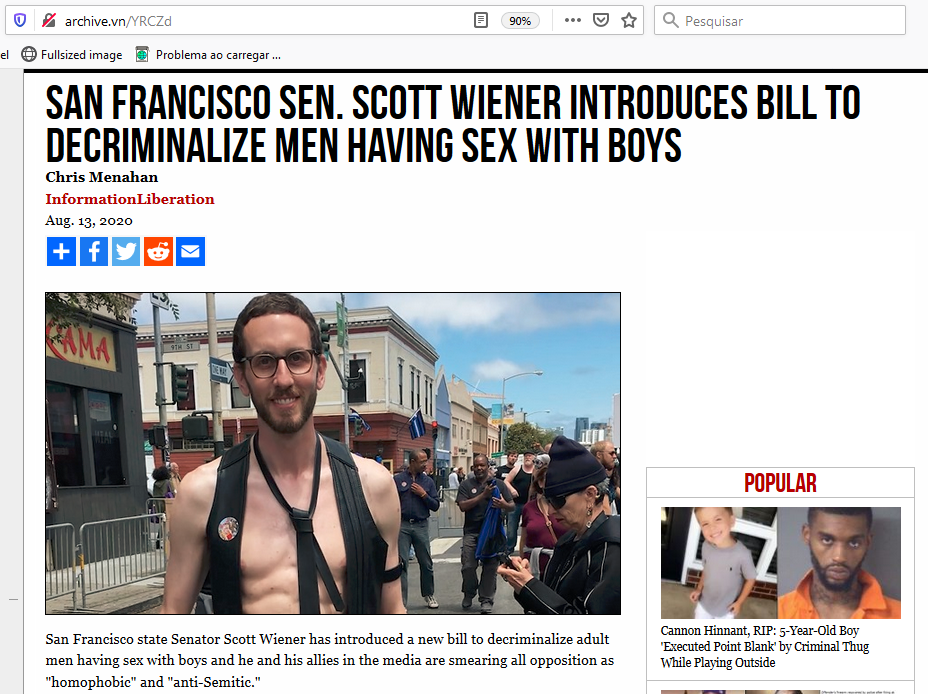 Pedophile In New Jersey Says He Wants His Right To Sexual Contact With Children, Appeal Granted!

Just this last week, I had taken the time to reveal to the American people that those they call representatives in this country that are, in fact, advocating for sodomy, pedophilia and pornography are also guilty, in many cases, of committing crimes against children (Jude 1:7).

In San Francisco, Sen. Scott Wiener introduces a bill to decriminalize men having sex with boys.

San Francisco state Senator Scott Wiener has introduced a new bill to decriminalize adult men having sex with boys and he and his allies in the media are smearing all opposition as “homophobic” and “anti-Semitic.”

From The Federalist, “No California Shouldn’t Decriminalize Adult Sex With 14-Year-Olds”:

LGBT activists have pushed reasonable notions of equality to its limits with obscene perversions. State Sen. Scott Wiener, D-San Francisco — the same lawmaker who co-sponsored a bill in 2017 to remove the felony penalty for knowingly exposing another person to HIV — has introduced a bill, Senate Bill 145 to give judges more flexibility in sentencing gay men who abuse minors.

Under current law — which Wiener, who is gay, describes as “horrific homophobia” — a straight 24-year-old male who has sex with a 15-year-old girl can avoid being put on the sex-offender list if the judge feels the situation does not deserve it, but a gay man in the same scenario with a similar-aged boy would not be given the same option.

Wiener’s argument is one of evolving social standards. In 2015, the California Supreme Court upheld the long-standing separation of vaginal sex from other forms of sex-based on the misguided idea that if pregnancy occurred, placing the father on the sex-offender list could ruin his chances of providing for his family. The extreme of the scenario would be an 18-year-old man with a 17-year-old girlfriend.

Wiener’s bill, however, is not so straightforward. He argues all forms of sex should be treated equally under the law.

Apparently, this criminal right here does not understand that he, nor anyone else, does not have the right to violate moral law, and why? It’s because the Lord never gave them the right (Psalm 94:20).

Furthermore, and 180 degrees diametrically opposed to this sodomite (Leviticus 18:22, 20:13), the law condemns such measures (Deuteronomy 25:1).

So, in taking it directly to the next point, we can see why others are emboldened to commit such crimes without fear of consequence. In New Jersey, 101.5 reported:

A convicted sex offender who argued that pedophiles are victims of discrimination and that laws against sexual contact with children violate his rights has been granted a narrow appeal.

The legal victory this month was not based on what the court called the defendant’s “unusual” strategy of promoting pedophilia but on the constitutional right to a speedy trial.

The now-31-year-old Gary Wolchesky was first arrested in 2009 but it took seven years before his trial started.

In a 44-page decision released Jan. 28, a three-judge appellate panel said that part of this delay was the fault of Wolchesky, who insisted on representing himself. But part of the delay also was the result of the investigation and new charges that were later added on.

Wolchesky argued that “pedophiles are a persecuted minority and that the New Jersey Code of Criminal Justice wrongfully makes this conduct a crime,” the appellate decision summarized.

He also argued that what he did was not against the law because the boys consented to his requests.

Monmouth first became aware of Wolchesky after he posted YouTube videos advocating for pedophilia. The videos still appear on YouTube.

It was the mother of one of the victims who got the ball rolling on the case after she looked at her 12-year-old son’s computer and noticed that he was chatting with someone named TEENTECH, whose profile said he was “20 years old and I like little boys.”

The mother sent TEENTECH, who turned out to be Wolchesky, a message telling him to stop communicating with her son. He replied: “I don’t care what your mom says.”

The mother notified the National Center for Missing and Exploited Children, who then notified Monmouth County prosecutors. A month later, after he continued to communicate with her son, she called Monmouth authorities and granted them permission to analyze her son’s phone.

Wolchesky was already known to Monmouth detectives. Six months earlier they had interviewed him after he posted videos on YouTube promoting the concept of pedophilia. During an interview with detectives, he admitted that he found 10-year-old boys “just so hot” and he discussed using his Xbox to communicate with children using the screen name TEENTECH. He was not charged with a crime at that time.

Authorities said they found evidence linking Wolchesky to five victims plus thousands of files of child sexual exploitation. Eventually, he was only convicted on charges related to four victims because the fifth child declined to testify at trial.

A trial was initially set for 2014 but was delayed when several of the victims revealed for the first time that Wolchesky had also gotten them to sexually penetrate themselves on video.

Wolchesky exercised his right to have the new charges brought before a grand jury, which handed up a superseding indictment on 27 charges.

“It were better for him that a millstone were hanged about his neck, and he cast into the sea, than that he should offend one of these little ones.” -Luke 17:2

In conclusion, I can tell you right now, friends, that the American people are sick and tired of being sick and tired when it comes to seeing the way that these said representatives are violating the law and our children and how it is that the courts are lowering the law by advocating for crimes against children, which is making them a prey.

Regardless, the American people are now responding in a way to these crimes where these pedophiles will no longer need a courtroom, and rightly so (Luke 17:2)!

When the law fails to serve us, then we must serve as the law!