Prepare For Change
Home ARCONTES The National-Socialist Critique of Democracy 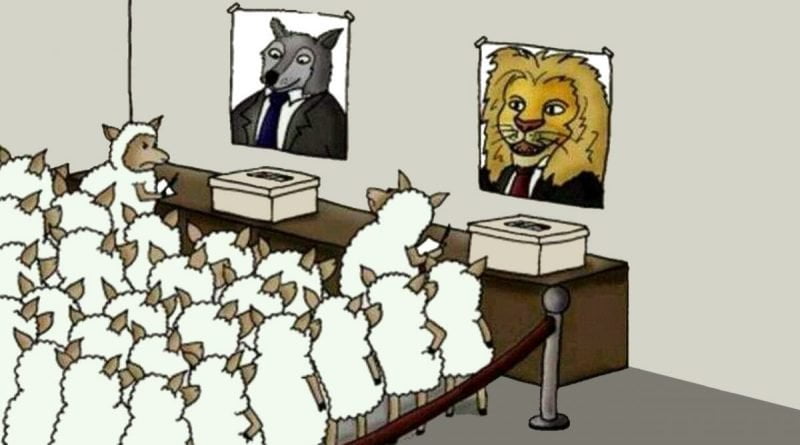 Translated by Hadding Scott from the 16th (1940) edition of Hansjoerg Maennel’s Politische Fibel.

The starting point of the democratic conception is: “All men are equal.” “Everything that bears a human countenance is equal.” Not only are the peoples equal to each other (this view leads to Internationalism), but even the human beings within a folk are equal. Consequently all have equal rights, even an equal right to participate in the state. “The authority of the state comes from the people.” (Weimar Constitution, Article 1.) – Since direct rule by the people is unworkable, one chooses representative democracy or parliamentary government.

Parliamentarism is the principle of vote by representatives, who make decisions through majority rule. (Parliamentarism, from Lat. parlare = to speak.)

Adolf Hitler: “The Jewish democracy of majority rule was always merely a means to the destruction of the existing Aryan leader-class.”

National-Socialism is the fiercest enemy of parliamentary democracy. In opposition to that, it stands for the principle of Fuehrertum. Fuehrertum is the direction of an organization by one over-towering man. The fuehrer-principle is based on the conception of human inequality. There are the intelligent and the stupid, the industrious and the lazy, the good and the bad. The particular peoples and races are different, and so are the individual human beings within a people. – Every folk comrade is appraised according to his performance for the folk. Valuation according to performance. – The standard of valuation must be the same for every folk comrade. We National-Socialists reject preferential treatment for one class. (Examples: absolutism of the 18th Century; the Weimar System, in which the National-Socialist was a second-class person, while lower humanity could run wild with impunity; English plutocracy).

There is no privilege for any special class; all folk comrades are evaluated equally (Program, Point 9). The result of an equal evaluation of the individual person is however not the same, but different. Here this principle applies: “To each what is appropriate,”* not “To each the same,” as in democracy. He who sacrifices and achieves much ought to stand higher than he who achieves little and sacrifices nothing. The National-Socialist idea of leadership (Fuehrergedanke) is founded upon a deliberate selection according to race (genetic value), character, and ability. Thus a rank-order develops. The entire folk organically arrays itself as a pyramid. The most capable and gifted member of the folk, who has prevailed through his over-towering achievements, stands at the head of the folk: he is the Leader.

(Draw this on the blackboard.)

In democracy the “power of the state” comes from the people. It consists in the rule of the mass. Authority (power to give orders) goes from below to above, while on the other hand, responsibility goes from above to below. Both are, however, unworkable in practice. One cannot command upward and assign accountability downward. (Examples.) Democracy thus leads directly to leaderlessness and irresponsibility. – In Fuehrertum by contrast these principles apply: authority from above to below, responsibility from below to above. The Leader appoints his lieutenants (Unterfuehrer), he gives them their orders and guidelines, and for the execution and success of these they are responsible to the Leader.

The National-Socialist movement is an example of true Fuehrertum. If a political leader or an SA-fuehrer gives an order, this must be carried out. Every follower (Gefolgsmann) can be called to account by his leaders. Because Adolf Hitler built up the NSDAP rigorously according to the fuehrer-principle, the movement inevitably prevailed against the Marxist and bourgeois mobs. – Likewise the German state, which is led by means of strict Fuehrertum, prevails against the neighboring democratic states. Against the democratic idea of the mass we National-Socialists set the idea of personality. Everything great in this world, all inventions and all cultural achievements are created by personalities. (Examples.) – Our Leader has formed a German folk out of disintegrating mass. Democracy is a symptom of decline in dying peoples (e.g. Greece, Rome, etc.) All ascending peoples are, by contrast, always led by significant personalities. – Democratic propaganda flatters the mass. Everyone would rather command than obey. Consequently democracy was beloved and the idea of leadership was often unpopular.

It is a mistake to believe that under the “people’s government” it goes well for the people. On the contrary! Experience has shown that parliamentary democracy leads to the ruin of the people. A people can only experience progress (Aufstieg) when a leader (Fuehrer) stands at its head. Heroes make history!

A true leader feels that he is responsible to his people. Here Adolf Hitler is a shining example. This principle of the responsibility of the Leader to the Nation is designated “Germanic democracy.” With Western parliamentary democracy, which we reject, Germanic democracy has nothing in common.

Adolf Hitler is the ideal leader: purposeful and inexorable, but at the same time tactically astute; industrious, never resting, moreover prudent and far-sighted; proud and righteous, but also modest and unpretentious; energetic and austere, but full of warm love for his people. From the simplest origins our Leader has worked his way up against the most difficult obstacles to become the greatest statesman in German history. We National-Socialists are proud that we are privileged to follow a man such as our Leader. He is a lofty example for us. We emulate him with all our powers.

* Jedem das Seine is still the motto of the German military police.