Prepare For Change
Home ARCONTES Why Do People Still Believe in Trump (Or Anyone in Government)? Will... 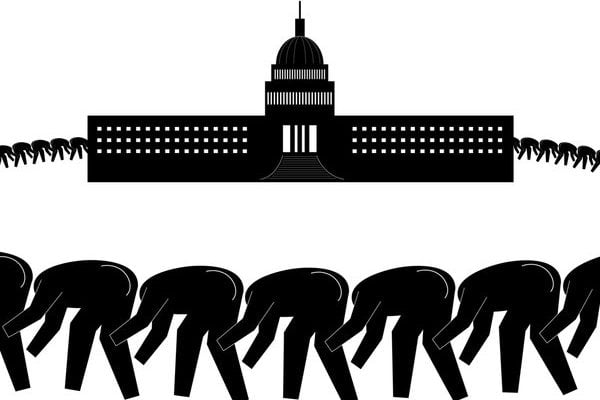 I think it is clear to most that the perception is that this country is split right down the middle.

Every four years, an ‘election’ process is produced and directed by the U.S. Political Policy Cinema Studio to see which puppet will be selected to be the head puppet in chief.

The emotion and passion generated by this block buster show is startling to say the least.

Why it is allowed to happen is unclear to any that still possess brain cells, but with well over 100 million voting for their master, the results are always 50/50 statistically speaking.

Obviously that could not happen in any legitimate situation, but it seems to happen every time in this country, and almost no one notices or cares.

This is certainly by design, as is all political maneuvering.

2020 Elections Should Get an Oscar Nomination

Of course, this year is no different, but this particular show has all the makings for an Oscar nomination for the most dramatic selection process of all time. It has everything from suspense, science fiction, extreme comedy, graft, violence, corruption, propaganda, and plenty of action.

And it may be the longest selection production of all time, and will certainly be classified as an American epic.

At this point, Trump has declared that he has been cheated out of his ‘rightful’ place as the next president.

This is most likely the case, as the other side, the Democrats, basically laid out their plan to win regardless of any outcome very early on, and in fact said how they were going to do it.

Trump knew this all along, but is now claiming he has been tricked.

This is the New America?

This is the new America, one that is open and upfront about all the corruption and manipulation that happens in order for a particular group of slime to be in power.

Little is hidden anymore, and one has to wonder if that is due to the fact that the average IQ in this country has fallen off the scale.

The so-called most free, most powerful, most intelligent, and most wonderful country on earth is filled with stark-raving mad, dumbed down, pathetic fools.

Today, it is appropriate to talk about the incumbent Trump, because the rage concerning ‘election fraud,’ is the talk of the day.

The dreaded Covid-19, the scourge claimed to cause death to all, has virtually been forgotten for the moment, but I guess even a ‘killer virus’ story needs a few days off during the time when the people stay up late to see who will be their next chosen master.

The absurdity of people is on full display today

The absurdity of people is on full display today. Most every Republican, conservative, and many libertarians are all standing together for Trump due to what appears to be an extreme ‘lesser of evil’ cooperation due to vote tampering.

This is ludicrous beyond imagination.

Those claiming to be against government, and for free markets, (these are claimed libertarians) are now walking hand in hand

with big government types, all to stump for Trump.

Lets take a look at Trump for a moment.

He promised a lot more, but for now we will concentrate on these few.

Trump’s friend Hillary never was prosecuted or went to jail.

If any taxes were lowered, it was made up for multiple times over through massive inflationary money printing from the Federal Reserve, which was never closed down.

He did not stop any wars, or bring home troops from around the world. In fact, he continued the carnage in Afghanistan and Iraq, stepped up substantially the slaughter and murder of Syrians while attempting to remove their elected ruler. (Remember election fraud)

The U.S. presence in Africa is huge, and he threatened to annihilate those in Iran and North Korea, threatened China and Russia, as well as other countries not cooperating with his mandates for their country.

He attempted to remove elected politicians in Central America, and even stole assets and oil from other countries.

No pedophile network was stopped as Epstein and many others continued this practice until he was allowed to be murdered, or was moved out of country and hidden to spend the rest of his life in leisure.

Concerning the economy that Trump promised to expand and improve, that of course not only did not happen, but the opposite result was forthcoming.

Trump was a president on steroids when it came to protectionism.

He sanctioned countries around the globe, especially China and Iran, harming the people of those countries.

In that process, he caused great economic harm to America by paying off his fascist corporate partners and stopping trade in order to gain more profits for selected companies and contributors.

This had the effect of raising prices dramatically for Americans, and limiting the supply of goods.

He implored the Fed to keep interest rates at zero and to keep printing fake money to hold up the markets in an attempt to make things look better than they really were.

Then the hoax called Covid-19 appeared, just as planned for decades, and Trump ran spending to all time highs of approximately $7 trillion in one year.

He declared a national emergency, thereby allowing the shutdown of almost the entirety of this economy, destroying untold American lives forever.

He deployed national troops, and stated that he would use the military to distribute a poisonous vaccine at the earliest possibility.

This was after he claimed he would never do so. These lies and transgressions go on and on.

The latest travesty has just occurred with the evil Trump

The latest travesty has just occurred with the evil Trump. With this election chaos, and obvious fraud, certainly from both sides, especially the left in this case, he has now shown his disdain for all Americans in favor of attempting to gain more approval to help himself politically at the expense of the citizenry.

In the midst of election re-counts and lawsuits, Trump touted Pfizer Pharmaceuticals by saying they had a vaccine coming soon.

Not only was this announcement premature, it was purposely used to highlight the manipulated stock market rise, and that people should take an experimental vaccine that has yet to be peer-reviewed or proven safe, not that it would ever be safe!

His motive seems obvious, as he needs public support to continue with his lawsuits and recounts, and this he thinks will put him in better favor.

In other words, he is using this to help himself politically, regardless of having no definitive results, exposing that he has no regard for the people of this country.

Trump Allowed the Economy to be Destroyed
Trump has presided over all this and through the entire Covid-19 fraud, and has allowed (caused) the economy to be destroyed.

He appointed the evil Fauci and Birx, and has funded Bill Gates and his vaccine programs with huge amounts of taxpayer money going to the Gates’ created GAVI.

He filled his cabinet with heinous people, including neocon warmongers and medical criminals, while overseeing the destruction of this country.

He sat back and watched as people across this land were imprisoned in their own homes, and stopped from working and having jobs in order to support their families.

Trump Will Save us from the Democrats?

This is who the Republicans and the on-board libertarians are saying will save the country from the Democrats.

Nothing will save this country from the Democrats or the Republicans, and any libertarians supporting them, except getting rid of them all.

My words are absolutely not meant to show any support for the evil Biden/Harris team, as they are simply leftist socialists and Marxists, but are only meant to expose that the entire political system in this country is atrocious, corrupt, and murderous.

They are all thieves and manipulators looking to benefit themselves and the ‘master class’ that controls them at the expense of all of you.

Voting is for Fools – Don’t be Fooled Any Longer!

Voting is for fools, and elections are only meant to make you believe that you have a say.

You do not have a say, and you have never been allowed to have a say.

Unless you tear down the governing system, and rely on yourself and fellow men instead of allowing this insanity called government to rule over you, this will end in the servitude of the masses.

Don’t be fooled any longer, and quit obeying this or any other government!