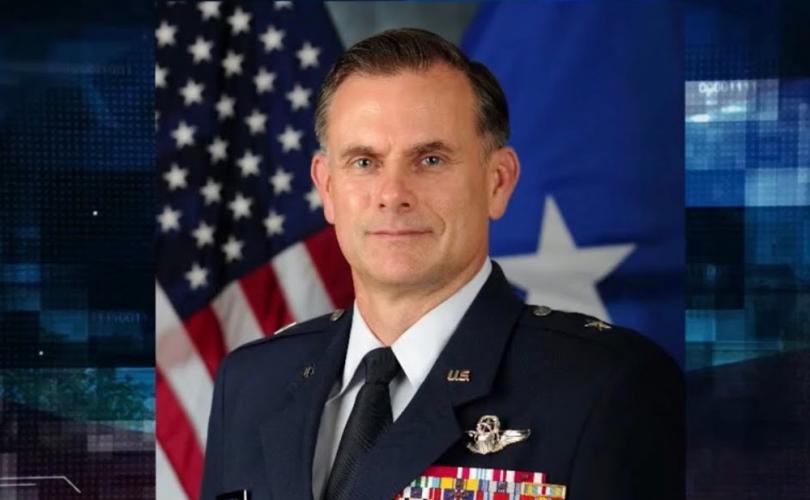 The coronavirus pandemic is part of the “stealth war” that the Chinese Communist Party has been waging against the United States by infiltrating its democratic institutions and undermining its political and social culture, a retired U.S Air Force general and China expert warned.

“It’s a very subtle and it’s a completely different kind of threat to our national security,” Spalding said during the Truth Over Fear Summit, organized by Catholic broadcaster Patrick Coffin.

The Chinese Communist Party (CCP) views the United States as its “main adversary,” not because of its nuclear arms but because “we have a constitution … designed to separate power in the United States to ensure no one person, group or party could gain ultimate power, and to recognize that the highest form of tyranny in the world is totalitarianism,” he pointed out.

Beijing fears that the Chinese people will “someday awaken to the potential of humanity as defined by our Declaration of Independence, the preamble to the Constitution, our system of institutions and rules and protections for civil liberties,” and so is actively seeking to “erode our nation from within.”

The way in which Beijing is using the coronavirus pandemic to gain advantage over the West is of a piece with this campaign, which Spalding detailed in his 2019 book: Stealth War: How China Took Over While America’s Elites Slept.

While America developed a strong military to defend its national interests and regards war, in the words of Prussian general and military theorist Claus von Clausewitz, as “the continuation of politics by other means,” the CCP “looks at politics as the method of war. In other words, war is politics; politics is war,” said Spalding, a senior fellow at the Hudson Institute.

Mao Zedong referred to this as the “people’s war,” and it is how the CCP “came to power in China: by using political warfare, psychological warfare, ideological warfare, economic warfare, many other capacities to motivate … the population and the society to essentially gain legitimacy and eventually overthrow the nationalist party.”

The CCP’s ability to control the narrative within China has been “primarily increased through the use of Western technology,” which has also, along with its increased ties with the West, allowed Beijing to exert control over the narrative in the outside world.

“After the end of the Cold War, and certainly when China was brought into the World Trade Organization, their ability to use business, finance, and information to extend this influence and control beyond their borders is what we are dealing with today in the coronavirus,” Spalding said.

As with the swine flu and SARS outbreaks, Beijing’s story was that a local official was at fault for not informing CCP higher-ups of the novel coronavirus outbreak in Wuhan, and was then fired.

But while the West interprets this as “incompetence,” the East’s interpretation is that the CCP “deliberately obfuscates things.”

That’s why Taiwan sent researchers to China in December, who reported back that the virus was spreading through human-to-human contact. Taiwan then slammed shut its border to China while the United States hesitated, Spalding said.

Meanwhile, Xi Jinping shut down domestic travel on January 7, even as six million people traveled from China to other countries. Xi then shut down Wuhan on January 23, Spalding said.

America later learned that the CCP was “putting pressure on the World Health Organization not to talk about human-to-human transmission.”

Moreover, China changed “overnight” from being a lead exporter of PPE (personal protective equipment) and masks, to a lead importer of these items, noted Spalding.

“Then subsequently, the Chinese Communist Party talks about taking advantage of the way that they’ve handled the coronavirus to advance their economy,” he told Coffin in a virtual Q&A.

Other clues that the CCP used the pandemic “as a mechanism to weaken the West and really increase its relative strength” were the “disinformation campaigns” Beijing orchestrated in the aftermath of the pandemic, the retired general said.

These included “social media campaigns” that claimed the coronavirus did not start in China, and those that stoked fear and panic and “certainly encouraged countries to lock down their economies,” Spalding observed.

“These are all components of a social media campaign that saw 40 percent of social media posts surrounding the coronavirus as bots, basically automated algorithms, that were designed to essentially throw gasoline on the fire, which was panic,” he said.

The pandemic was followed by “riots and looting” with “again, social media coming from bots that was antagonizing and adding to fuel to that fire,” he contended.

“If you go back and study the method of warfare of the Chinese Communist Party and recognize that it’s political, it’s psychological, it uses media, it uses all elements of connectedness to essentially control the narrative, then you realize that we created the perfect society, global society, to enable the spread of that narrative,” he said.

He elaborated on the “stealth war” China has been waging against America for years.

“There has been a determined effort on the part of the Chinese Communist Party and the Russians to diminish the attractiveness of liberal democratic principles and democratic societies, and this has been very effective,” Spalding said.

“Not only are our universities and schools now teaching ideas like critical race theory, like socialism, like applied postmodernism, but they’re also infiltrated by a number of Confucius Institutes,” he noted.

“When you get right down to the heart of it, critical race theory, post-modernism, applied post-modernism really has zero difference from the way the Chinese Communist Party runs their society,” Spalding told Coffin.

That is, “the narrative is what determines what you know and what you think.”

The CCP also realized that “Silicon Valley created this enormous engine for individual influence in these large tech companies.”

It has adopted these practices and “built essentially competing tech companies” to Google, Amazon and Facebook, these being BeiDou, Alibaba, and Tencent, respectively, as well as exporting such products, such as video sharing network, Tik Tok.

“Beidou, the main search engine in China, is curated for what the Chinese Communist Party wants you to see,” he told Coffin.

“What you have begun to see here in our society is a realization that our search results in Google are similarly curated for what Google wants you to see, and it’s not necessarily always purely related to economic benefit for Google, it’s also related to their social and political world view,” Spalding said.

“That’s where we are beginning to have this challenge with regard to the use of your data and censorship in the free world that mimics in a large respect what the Chinese Communist Party does.”

Moreover, the CCP is aiming to become, in Taiwanese-born American computer scientist Kai-Fu Lee’s phrase “the Saudi Arabia of data,” Spalding said, “because they understand that the data drives artificial intelligence and influence. And that’s why Facebook, Amazon and Google all have artificial intelligence research centers in China.”

America’s protections of its national sovereignty through its military power and “two big oceans” are “illusory protections,” that “actually mask the incredible threat to our democracy that comes in through corporate business practices, through Wall Street investment in China, through our academic system, through our research labs, through our lobbying and PR firms and our law firms and our political establishment,” he said.

“Essentially, the Chinese Communist Party has not only infiltrated nearly every institution in the United States, it also controls much of the United Nations, now the World Bank, many of the international institutions like the World Trade Organization,” he said.

The CCP “improved” on communism of the USSR’s Josef Stalin by “using the banking system and access to capital in conjunction with allowing a certain level of corruption and profit seeking” to “create an economy that was enticing to outside interest in a way that aligned to, say, corporate America’s profit motive,” Spalding told Coffin.

“They’ve also been very open in a geopolitical sense,” he said.

“As opposed to Khrushchev banging his shoe at the UN, Chinese leaders have been very, very open. Xi Jinping and other leaders have gone to Davos and talked about the need for globalization and openness … They have adopted the narrative of cooperation and collaboration while still maintaining the regime very much like the Soviet Union.”

These are lessons the CCP learned in the aftermath of the 1989 Tiananmen Square massacres that crushed a student movement for democratic reform.

The CCP’s Tiananmen Papers say that Beijing needs to “stay connected to the free world in order to extract innovation, technology, talent, and capital but we cannot allow this idea of freedom … to infect the minds of Chinese subjects.”

That Americans have been affected by China’s “stealth war” is evident in many ways, one being the breakdown in social discourse.

“I just call things the way I see them,” Spalding told Coffin, “It just incenses people and that’s something that I think is very, very dangerous for our society.”

“I think it’s something that we can turn around, but we have to confront it,” he added.

“People have been so cowed and they’re so terrified of confronting it directly when it happens that … they self-censor,” Spalding said. “We have to confront it. … Where evil exists, if you don’t confront it, it will grow, and that’s, I think, our biggest challenge today.”