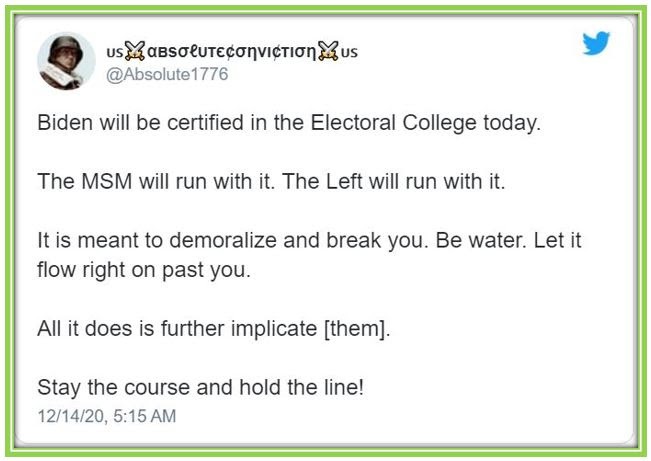 State legislatures in Nevada, Wisconsin, Georgia, Arizona and Pennsylvania have selected republican electors to preserve cases and lawsuits of election fraud in each state.  If the outstanding court cases are successfully argued the republican electors would be able to cast votes for President Donald Trump.

Trump Campaign Senior Advisor Stephen Miller explains what is happening today as each state presents and casts their votes for state electors.  The only date outlined in the constitution is January 20th.  As Miller outlines: “We have more than enough time to right the wrong of this fraudulent election result.”

Watch out for Common Core math being displayed by the DemonRats in their Electoral College voting. They think that electors appointed by Secretary of States and Governors are constitutionally recognized. They aren’t. The electors selected by the State Legislators are the ones that are Constitutional.

Here is the real math to those of you sending me emails at your wits end that President Trump won’t win in the end.

No person shall be a Senator or Representative in Congress, or elector of President and Vice President, or hold any office, civil or military, under the United States, or under any State, who, having previously taken an oath, as a member of Congress, or as an officer of the United States, or as a member of any State legislature, or as an executive or judicial officer of any State, to support the Constitution of the United States, shall have engaged in insurrection or rebellion against the same, or given aid or comfort to the enemies thereof. But Congress may by a vote of two-thirds of each House, remove such disability.

Any State or federal officer automatically loses his/her seat and can’t hold office without 2/3 of Congress approving. This matches the wording of the EO for foreign election interference. Many Democrat and RINOs at State and Federal levels will soon be losing their seats and headed to jail..

Col. Waldron: “Yes, our “White” hat hackers, they have that traffic and the packets.” https://t.co/kGUaBS25eX

“We conclude that the Dominion Voting System is intentionally and purposefully designed with inherent errors to create systemic fraud and influence election results.”

“The allowable election error rate established by the Federal Election Commission guidelines is of 1 in 250,000 ballots (.0008%). We observed an error rate of 68.05%. This demonstrated a significant and fatal error in security and election integrity.”

..”The intentional errors lead to bulk adjudication of ballots with no oversight, no transparency or audit trail.”

GEORGIA:
Secretary of State Brad Raffensperger says Georgia will conduct a Signature Audit in Cobb County. Results to be released in two weeks.

Finally! Not enough people are talking about this. Credit where it’s due. Thank you, Georgia!

Now Congress has competing slates of electors to consider from Pennsylvania…. https://t.co/c8svbtcyTg

“They’re being stopped from fulfilling their constitutional duty.” Ian Northon, an attorney with The Amistad Project, discusses the GOP electors presence at the Capitol today and being blocked from getting inside #Michigan #GaryEisen #ElectoralCollege #ElectoralCollegeVote pic.twitter.com/LUiAMde0qm

RINO Michigan Speaker of the house Lee Chatfield ILLEGALLY closed the Michigan Capitol, preventing the GOP legislature from contesting the election results – which would buy us time and maybe another SCOTUS case. Shameful! pic.twitter.com/a0jaz6hpAl