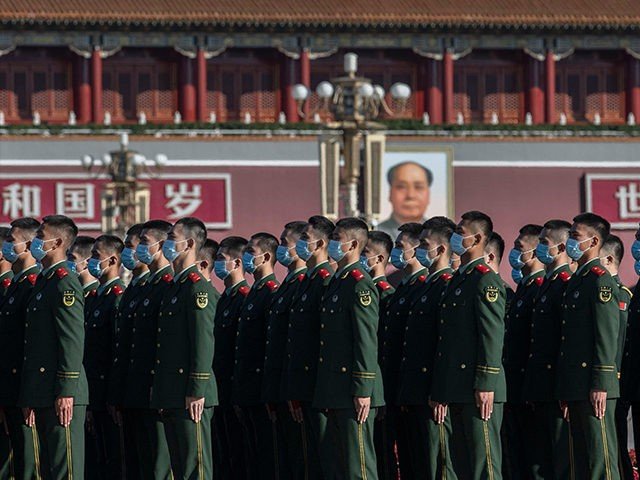 China’s communist regime is sounding increasingly triumphalist in the wake of the economic destruction wreaked by the coronavirus pandemic that originated in Wuhan, China.

“China’s Communist Party, under its leader, Xi Jinping, has promoted the idea that the country is on a trajectory to power past Western rivals,” the New York Times reports.

Chinese Communist Party (CCP) propaganda characterizes Western countries, and the United States in particular, as being crippled by the virus and internal strife – with one retired Chinese general going so far as to call the United States a “defeated power” in the “fight against the pandemic.”

China stamped out the coronavirus, the messaging goes, with a resolve beyond the reach of flailing Western democracies. Beijing has rolled out homegrown vaccines to more than a million people, despite the safety concerns of scientists. China’s economy has revived, defying fears of a deep slump from the pandemic.

“In this fight against the pandemic, there will be victorious powers and defeated ones,” Wang Xiangsui, a retired Chinese senior colonel who teaches at a university in Beijing, averred this month. “We’re a victor power, while the United States is still mired and, I think, may well become a defeated power.”

The firm leadership of Mr. Xi and the party has earned China its recent success, say newspapers, television programs and social media.

“Time to wake up from blind faith in the Western system,” said a commentary in the state-run China Education News last week. “Vicious partisan fighting has worsened in certain Western countries, social fissures have deepened, and a severe social crisis is brewing.”

China’s communist leader Xi Jinping “sees China and the United States as locked in ideological rivalry,” the Times notes. “Since coming to power in 2012, he has called for Chinese schools, textbooks and websites to inoculate youth against Western values that could erode party rule and the country’s ‘cultural self-confidence.’”

The Times article began with a description of a Beijing artist’s rendering of what the world will look like in 2098, where China is shown as a dominant “high-tech superpower and the United States is humbled.” According to the artist’s rendering, “Americans [in 2098] have embraced communism and Manhattan, draped with the hammer-and-sickle flags of the ‘People’s Union of America,’ has become a quaint tourist precinct.”