Prepare For Change
Home ARCONTES Panic And Shoplifting Sweep Across America As Fears Of An Economic Collapse... 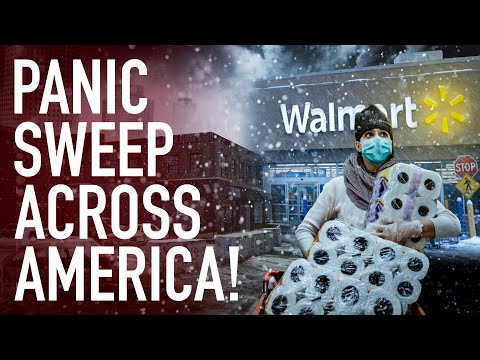 Today, the lives of millions of Americans is about to be greatly shaken, as the federal benefits that were helping several families to stay afloat during this period of economic collapse are scheduled to expire, and no one really knows if the new stimulus package is going to come into force as soon as expected.

It’s no news that this year’s economic meltdown led a large chunk of our population to unemployment, and consequently, to fall into poverty and face housing and food insecurity, but as of tomorrow, these households will officially lose their safety net, and we can’t tell for sure they will be able to qualify for the next round of benefits while we head towards a very dark winter.

If this isn’t the saddest Christmas the U.S. has ever had, we wonder how much worse things could get, because at this point, the situation has become so dire it is just heartbreaking to watch our citizens and our country go down this tortuous path.

Panic and Desperation has been taking over the nation. Amid the worst hunger crisis this country has ever recorded in modern times, and the reduction of programs like SNAP and WIC as well as miles-long waiting lines in food banks, numerous people already started stealing food to survive.

Authorities, retailers, and loss prevention researchers are reporting a surge in shoplifting, but differently from other recessions, the items taken aren’t highly-priced merchandise, but everyday staples such as hygiene products and dried food, signaling the extent of the misery and anguish many in our society are currently suffering with. That’s the ominous sign of the times we expose in this video.

When the economic collapse becomes so intense people start panicking and stealing to survive, there we can see how authorities completely failed our country. The reckless response to the repercussions of the sanitary outbreak in the economy has destroyed our businesses, our jobs, and our finances.

As unemployment benefits and the extension of several food assistance programs lapse this Christmas, and we have no confirmation whether the new round of stimulus will be issued right away, many will be left without viable alternatives to find enough to eat, especially considering food pantries across the country have been increasingly overwhelmed by the unprecedented demand.

Since the institution of new lockdown orders, several publishings have been addressing the growing rates of shoplifting throughout the U.S. Most notably, the Washington Post has recently described the dramatic situation of a great number of Americans that have been secretly hiding essential products in their bags during their trips to grocery stores.

The article also covers business owners’ dilemma in face of the public’s mounting struggle to afford food, and just as worryingly, to provide enough for their children. That’s what Capitol Supermarket manager Joo Park explained in the article.

Theft rates have more than doubled at his store, and Park usually tends to avoid calling officers, choosing instead to ban offenders from coming back. “It’s become much harder during the [health crisis],” he points out. “People will say, ‘I was just hungry.’ And then what do you do?” the manager exclaimed.

Stores located in low-income areas, such as Dollar Tree and Family Dollar, have oftentimes seen increasing instances of theft during the past year. And with over 26 million adults, or approximately 1 in 8 Americans, already dealing with food insecurity, if the economic context doesn’t show any improvements nor reinserts its workers into the labor market soon enough, the situation might spiral out of control fairly quickly.

According to local law enforcement agencies, in states like Philadelphia, shoplifting has climbed roughly 60 percent this year.

This is the clearest picture of the great American tragedy. In the world’s richest country – a nation that once made us proud of its achievements – our citizens are now being forced to steal when they shouldn’t have to. Federal safety nets have proven to be ineffective when our people don’t have real conditions to restructure their lives.

The more they distract us with petty stimulus proposals while continue to let our businesses and our economy struggle, the more our suffering will linger. The United States is doomed to a dreadful fate in the hands of such deceitful leaders and this economic collapse is only the tip of the iceberg.