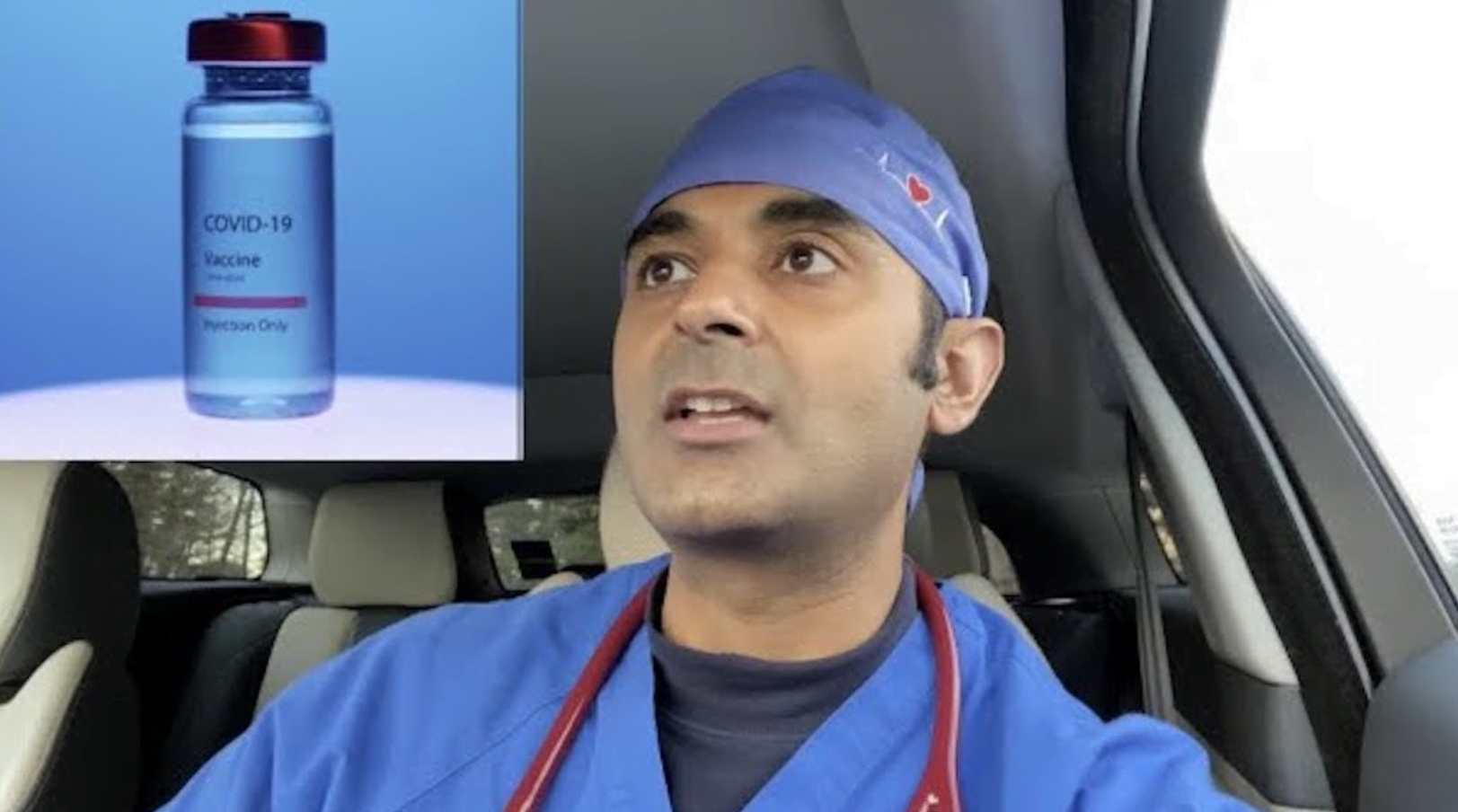 Take a moment and breathe. Place your hand over your chest area, near your heart. Breathe slowly into the area for about a minute, focusing on a sense of ease entering your mind and body. Click here to learn why we suggest this.

What Happened: Dr. Suneel Dhand, an internal medicine doctor with a hefty following on YouTube makes on thing clear, and that’s the fact that he supports and believes in routine vaccinations, as well as recommends them to all of his patients. According to him, “vaccinations have been amazing” for humanity, and while this belief is shared by many, I believe it’s important to point out that it’s also strongly opposed by many, and that includes a wealth of scientists and doctors. That however is another longer and deeper discussion.

In one of his most recent YouTube posts, Dr. Dhand explains why he’s on the fence about taking the COVID vaccine. He explains when it comes to any type of illness, if people have antibodies for it, he or any other doctor at his clinic never administers a vaccine.

Vaccine expert and Harvard professor of medicine Dr. Martin Kulldorff recently tweeted that, “After having protected themselves while working class were exposed to the virus, the vaccinated Zoomers now want Vaccine Passports where immunity from prior infection does not count, despite stronger evidence for protection. One more assault on working people.”

There are multiple studies hinting at the point the professor makes, that those who have been infected with covid may have immunity for years, and possibly even decades. For example, according to a new study authored by respected scientists at leading labs, individuals who recovered from the coronavirus developed “robust” levels of B cells and T cells (necessary for fighting off the virus) and “these cells may persist in the body for a very, very long time.” This is just one of many examples. There are studies that suggest infection to prior coronaviruses, which prior to COVID-19 circled the globe infecting hundreds of millions of people every single year, can also provide protection from COVID-19.

Keep in mind, we are talking about a virus that has a survival rate of 99.5 percent for people under the age of 70, and that the number of people who have been exposed to COVID is estimated to be a great deal higher than those who have tested positive. This is true for many other similar viruses, including other coronaviruses which circle the globe every single year and infect hundreds and millions of people.

Why This Is Important: Why is this important? Because it calls into question measures that are threatening to take away the freedoms of people who refuse to take the vaccine. Vaccines may be required to travel, go to certain restaurants, concerts, enter certain public buildings and so on.

Kulldorff and Dr. Bhattacharya, a physician and professor at Stanford Medical School explain,

The idea that everybody needs to be vaccinated is as scientifically baseless as the idea that nobody does. Covid vaccines are essential for older, high-risk people and their caretakers and advisable for many others. But those who’ve been infected are already immune. The young are at low risk, and children — for whom no vaccine has been approved anyway — are at far less risk of death than from the flu.

Vaccine passports are unjust and discriminatory. Most of those endorsing the idea belong to the laptop class — privileged professionals who worked safely and comfortably at home during the epidemic. Millions of Americans did essential jobs at their usual workplaces and became immune the hard way. Now they would be forced to risk adverse reactions from a vaccine they don’t need. –

How have we come to a point as a society where these measures can be put in place when they go against the will of so many people? How can we call ourselves a democracy? Wouldn’t it be better if recommendations were made instead of using authoritarian-type of measures? If you take the vaccine, should you not be comfortable with the fact that I haven’t, given the fact that you have and you believe it is safe and effective? If that’s the case, what do you have to worry about if you are protected? (Related CE article on Herd Immunity)

The Takeaway: It’s hard to know what to do, or what action steps can be taken when so much information is not presented by mainstream media. This is a shame because mainstream media is a perception control hub for the masses. If certain information is not presented there, odds are the majority of people are not going to be aware of it. If controversial ideas are simply labelled as a “conspiracy theory” then people will not even entertain the idea that these controversial ideas may be true, no matter how much evidence actually lies behind it. There are multiple examples, like clinically proven alternative treatments for COVID, or example. Despite many of them being evidence based, that evidence and information will never be presented by mainstream media or acknowledged, and if it is acknowledged it’s deemed a conspiracy theory.

Again, this is one of many examples and it leads to society being unable to have appropriate conversations about controversial issues. Many people are simply unaware of certain information as we’ve come to rely on our television screen and government to give it to us.

So, what’s the solution? Independent research is one, but more work really needs do be done in the area of emotional regulation. I find people have a hard time accepting information that challenges what they believe, simply because the implications are quite large and in some cases the information may completely change their entire worldview. It’s quite easy to say “the government wouldn’t do that” or “if that were true everybody would know it,” but this simply isn’t the case.

“The conscious and intelligent manipulation of the organized habits and opinions of the masses is an important element in democratic society. Those who manipulate this unseen mechanism of society constitute an invisible government which is the true ruling power of our country. We are governed, our minds are moulded, our tastes formed, our ideas suggested, largely by men we have never heard of .” – Edward Bernays  Propaganda, 1928