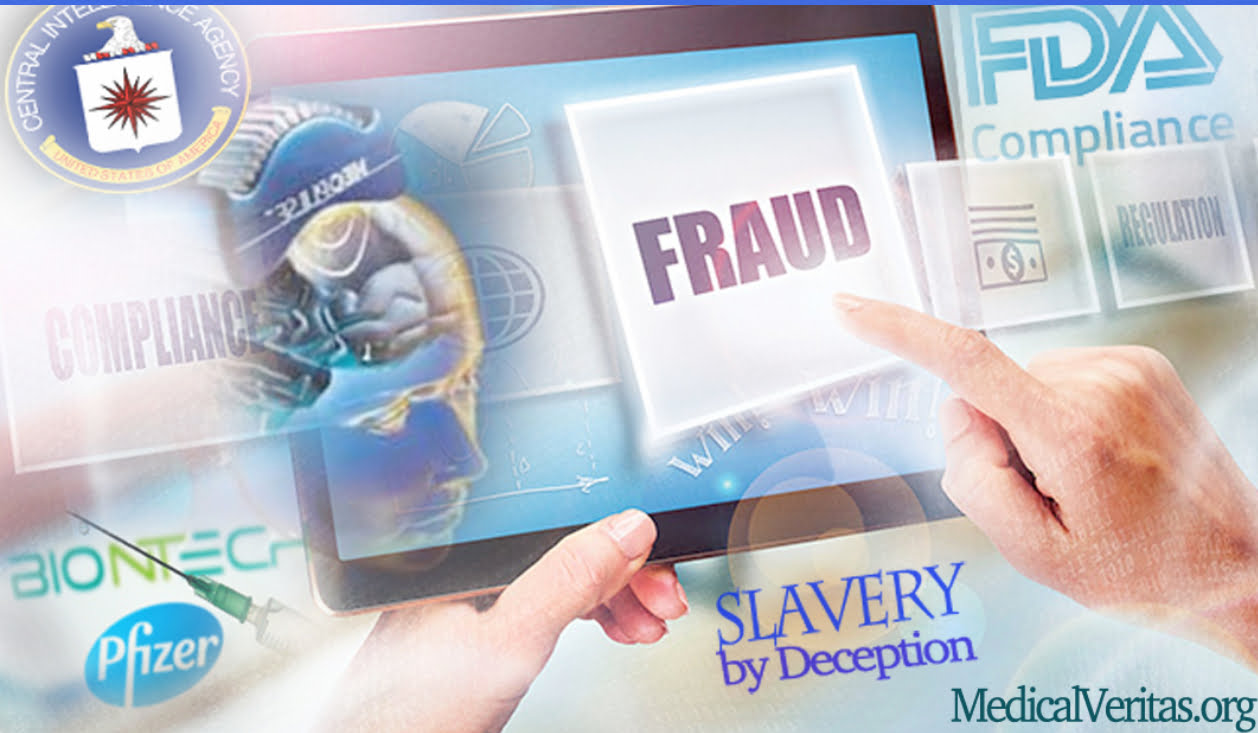 Las Vegas, NV (MedicalVeritas.org)—The COVID crisis was schemed militarily to foist untested vaccines on the public as a “decoy” concealing worse threats from “devices” called a “hydrogels”. The new ‘mysterious’ nano-biotechnology in vaccines and nasal swab tests are capable of electronically-linking human brains to the cloud wirelessly, according to federal court documents evidencing these facts filed in Horowitz v. Pfizer, et. al.

Dr. Leonard G. Horowitz, who the drug companies smeared as a “dentist” and “conspiracy theorist,” is suing the gene-altering bioengineers, Pfizer and Moderna, for damaging his personal, professional, commercial, and religious interests by way of fraud and crimes committed against humanity by the alleged “racketeering enterprise.” The BigPharma/BigTech/BigMedia conglomerate has effectively “captured” the Defense Department, federal health agencies, and the mainstream media, according to evidence filed in the case. 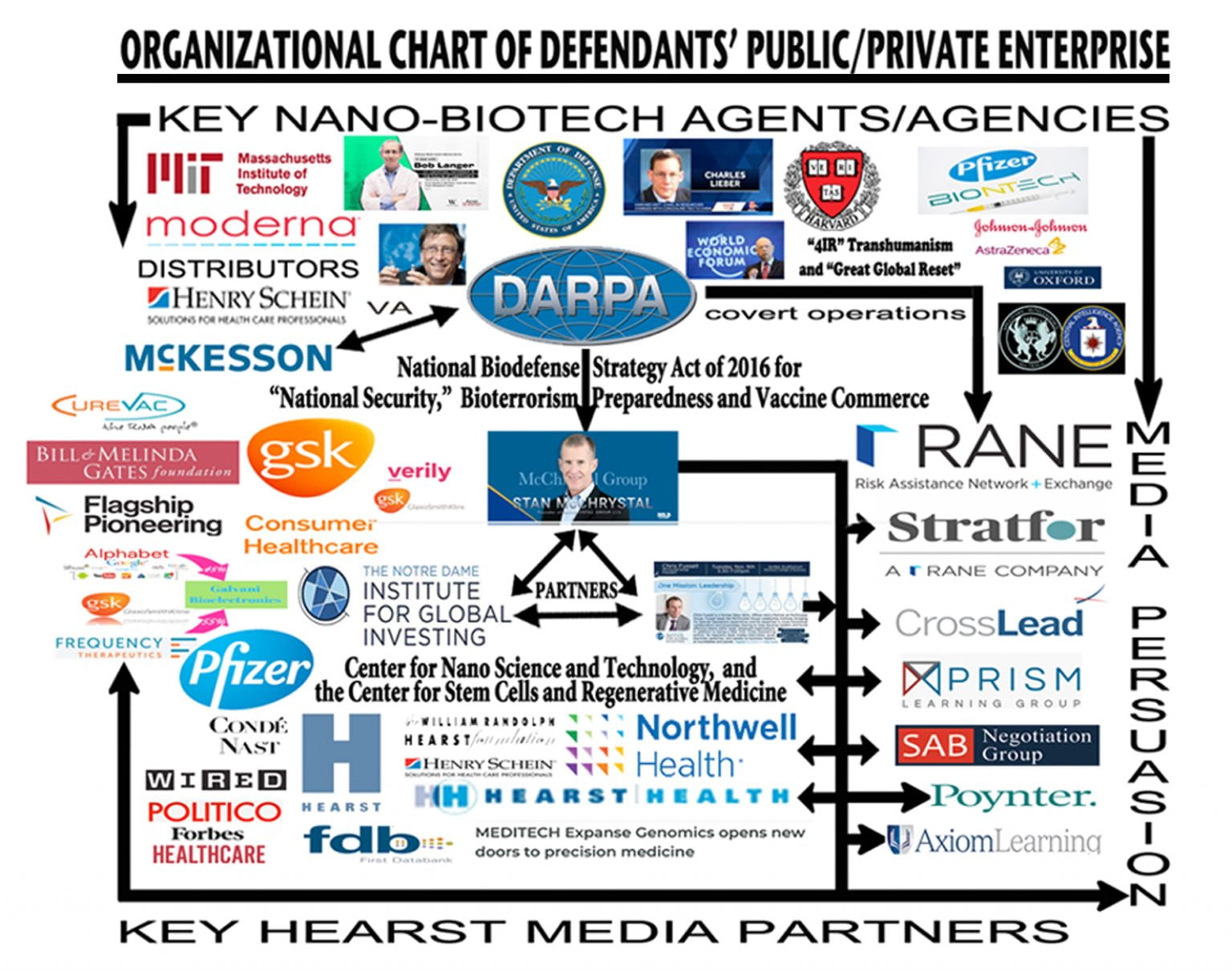 A decoy is defined militarily as, “an imitation in any sense of a person, object, or phenomenon that is intended to deceive enemy surveillance devices or mislead enemy evaluation.”

The COVID “phenomenon,” according to new discoveries in the case, is intended to deceive and mislead civilization’s awareness of the actual lab science underlying the pandemic, as well as divert from the plague’s actual purpose–the corporate/military intelligence community’s deployment of the ‘plandemic‘ to advance new transhumanist/cyborg biotechnology.

The alleged cyborg and “transhumanist” biotechnology, and alleged COVID response hydrogel deployment scheme, operates mainly under the financial influence and cover of Gates, DARPA, and the leading global intelligence agencies.

These irrefutable connections best explain the double-dealing between the World Health Organization (“WHO”), the National Institutes of Health, the National Institute for Allergies and Infectious Diseases NIAID, the U.S. Centers for Disease Control (“CDC”) and China’s military overseeing Wuhan lab operations. The complicity and cover-up of Chinese and American officials concealing the Langer/Lieber/Wuhan lab evidence best explains the militarily-weaponized “advanced function” COVID-19/SARS/HIV mutagen developed by both East and West collaborators.

Contrary to news sources dismissing allegations of an “accidental” outbreak from Wuhan, the consensus of intelligence officials worldwide now conclude the outbreak sourced from a lab. What they have yet to disclose is emerging from Horowitz’s lawsuit. He vets the military-industrial-drug syndicate’s underlying motive for the pandemic and “emergency response”.

Beyond the “Great Global Reset” justifiably alleged, transhumanism appears to be the overriding motive behind risking civilization’s health, safety, and extinction with COVID and related bio-electronic commerce, according to Dr. Horowitz.

Bill Gates and his partner, Klaus Schwab, director of the World Economic Forum, describes transhumanism as a “fusion of our physical, digital, and biological identities.” This cyborg movement and its impositions (including social distancing and mask-wearing), depends on the hydrogel’s capacity to cross the blood brain barrier with nano-particles of copper, gold or silver capable of wirelessly data-mining and linking consciousness to the Cloud. This chief objective is clearly and convincingly espoused by the WHO’s leading sponsors—Gates and Schwab.

According to Schwab, this Fourth Industrial Revolution (“4IR”) fuses digital and biological domains that serve “tech-savvy individuals” (and the ‘global elite’) more than “less knowledgeable individuals.” The new technology is destined to produce “a true global civilization.”

“That is the ‘we’re all in this together’ meme,” Dr. Horowitz quipped.

In January 2019, the leading 4IR nano-biotechnologist—Harvard chemistry professor and Nanosys, Inc. founder, Charles Lieber—was indicted by the Justice Department for lying about his network of alleged Chinese espionage agents.

“Contrary to ridiculous and diversionary propaganda,” Dr. Horowitz said. “The Chinese were most interested in the 4IR neuroscience biotechnology suitable for vaccines or nasal swab hydrogel nano-implants.

“Communism and socialism fails without optimal mind-control over populations,” Horowitz explained as a Harvard-trained expert in behavioral science, media health education, social engineering and emerging diseases. His revelations in the origins of AIDS, Ebola and now COVID, have made him the best-selling author in these fields internationally. He has been whistleblowing for a quarter century on the secret agents and agencies most responsible for the modern pandemics.

“Cyborg-level mind-control is best provided covertly militarily by Lieber’s and Langer’s neuroscience and related biotechnology for ‘frequency therapeutics’,” Dr. Horowitz explained. “That includes data-mining and computer analysis of wireless communications between human brains and the Cloud. That is what today’s warlords are deploying to diagnose, treat, or control virtually everything that is ongoing in people’s their bodies, minds, and energetically-administered spirits.

“In other words, “civilization’s collective consciousness is being hijacked by BigTech that is also BigPharma and the PharmaMedia. And the only thing that can stop that is the U.S. Constitution, freedom of religion, or God.”

Like the intelligence community and military, however, the Justice Department too has been “captured” and subverted, Dr. Horowitz evidences.

Subsequently, parties to the criminal case against Lieber sealed the court records for presumed National Security. This concealment of evidence implicates the government’s complicity with DARPA’s, Bill Gates’s, Klaus Schwab’s and the CIA’s 4IR hydrogel neuro-science operation and COVID impositions.

As evidenced in Horowitz’s lawsuit, Harvard’s Lieber and M.I.T.’s Langer co-authored (with their students) much of the world’s most advanced neuroscience in this field of nano-bioelectric technology. Their financing came mostly from Bill Gates’s enterprise and the DOD through DARPA, according to court records.

The Harvard, M.I.T. and Epstein Connections 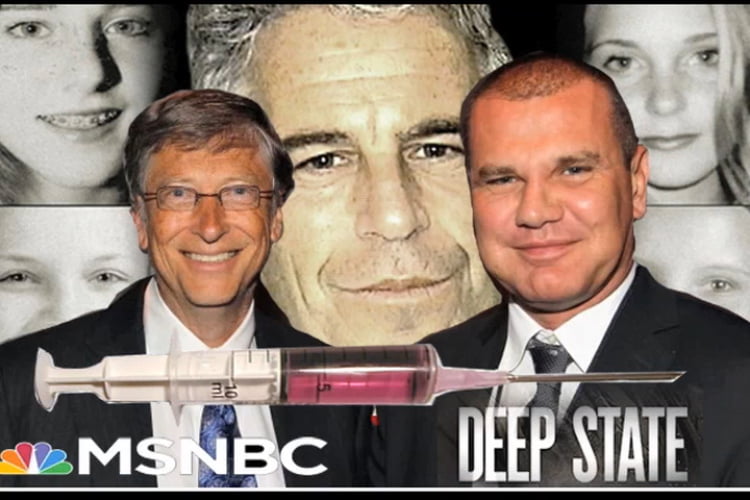 A photo taken in Epstein’s home with Gates and his alleged “body guard,” Boris Nicolic, evidences the nano-biotechnology mainstream media decoy, diversion, censorship, and misinformation. Nicolic’s close association with Epstein and Gates made him privy to Lieber’s and Langer’s developing wireless nano-neuroelectric-biotechnologies. Concealed by the mainstream media, besides being a Harvard professor and medical doctor, Nicolic was the co-founder and managing director of health care and life sciences for the investment firm, Biomatics Capital. That company too was capitalized as a start-up by Gates, as was Moderna in contract with DARPA.

To allegedly launder the massive fortunes Gates, Nicolic, Langer, and fellow ‘inside-traders’ made on DARPA’s military support for Moderna’s largely secret program, the investors formed “Particles for Humanity” in 2020. The name “Particles” ironically reflects the hydrogel nano-particles of copper, gold, or silver deployed in the lipid polymer device converting humanity into a cyborg community.

‘Regulatory capture’ by Gates & Company best explains: (a) the FDA’s decision to grant the drug companies’ Emergency Use Authorization for these experimental vaccines; (b) the military’s involvement in advancing this nano-biotechnology; (c) the intelligence agencies’ complicity in secreting such a cyborg program for civilization’s transformation into transhumanism;” (d) the FDA’s gross negligence in certifying Pfizer and Moderna’s safety-testing data that clearly showed the drug companies had not performed any “genetic safety testing” on the admitted “genetic therapies;” and (e) the Emergency Use Authorization (“EUA”) granted illegally despite several alternatives being available, including hydroxychloroquine and Dr. Horowitz’s OxySilverTM with 528.*

A pdf download of Horowitz’s latest filing opposing Moderna’s motion to dismiss is available HERE. This filing is supplement by “Plaintiff’s Motion for Judicial Notice” bringing the court’s attention to the connections between the DOD’s DARPA, Moderna, Pfizer, et. al., and the nano-bioelectric hydrogel technology for connecting human brains to the Cloud.

In response to Dr. Horowitz’s lawsuit, defendants Pfizer, Moderna, Henry Schein, and Hearst, immediately filed to stay such discovery of evidence pending their motions to dismiss the case. The companies’ actions are intended to bury their liability and this intelligence forever.

In the past few years, Dr. Horowitz’s “528 green wave” frequency science has been repeatedly proven in scientific studies to be most beneficial in combating infectious diseases. Subsequently, even vaccinology has been upgraded by the doctor’s pioneering research and developments in this nano bioelectric field.

For example, “Ag-nanoparticles via green synthesis are being investigated as both a safe nontoxic adjuvant and drug delivery system in vaccinology. . . . [since] AgNPs are one of the attractive candidates for drug delivery of macromolecules such as DNA, RNA, and proteins.”

The absorption spectrum of AgNPs shows strong support for Dr. Horowitz’s 528Hz/nm chlorophyll anti-oxidant thesis. “A typical emission of AgNPs is observed at ~ 485 and 528 nm . . . . The origin of the emission is due to the assistance of d band electrons of the AgNPs on absorption of the incident photon energy, to higher electronic states in the sp-band. The . . . emission peak at 528 nm is due to the presence of the surface states of the nanoparticles.”