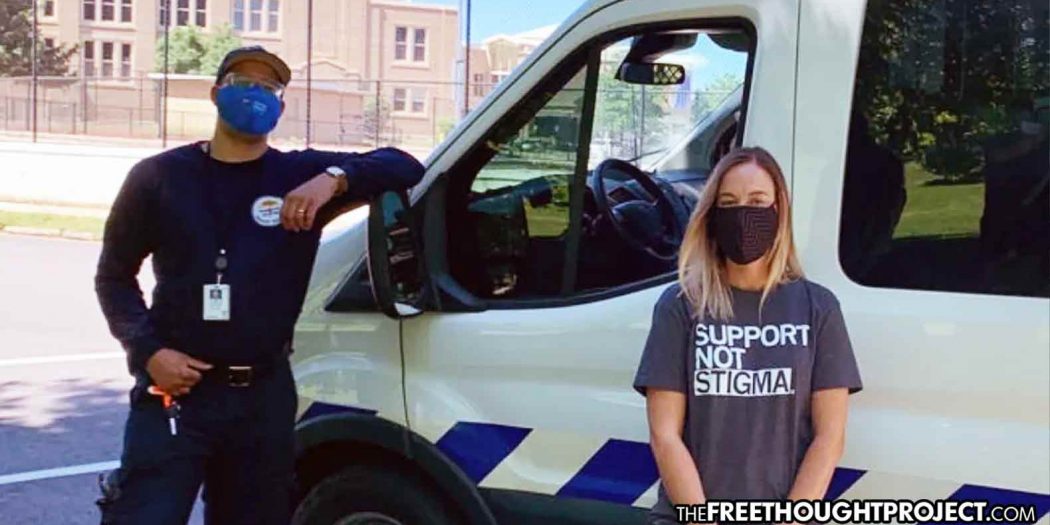 As TFTP reported last week, Christian Joseph Hall, 19, was in the midst of a mental health crisis. He positioned himself on top of an overpass on I-80 leading to police closing off the road and engaging with him. Moments after police arrived, however, Hall would be dead. Video would prove he had his hands in the air and had surrendered when cops opened fire. Hall has now become one of over 1,400 people in a mental health crisis to lose their lives to police since 2015.

As TFTP has pointed out, even cops who voluntarily attend Crisis Intervention Training (CIT), have shown that they are quick to the trigger when dealing with the mentally ill.

As the Free Thought Project reported, the overwhelming majority of time spent by police during training is devoted to shooting their weapons. Very little time is set aside for training in de-escalation tactics, and most departments receive zero training in dealing with the mentally ill.

The list of unarmed and often completely innocent mentally ill people killed by police is immense. TFTP archives are full of tragic stories in which police were called to help someone in a crisis and end up murdering them. People are killed even when they aren’t in a crisis and simply act differently like Elijah McClain, who was on his way home from buying groceries and was murdered by police because he was an introvert and wore a ski mask.

Instead of attempting to save the sinking ship that is cops responding to mental health crises, some municipalities are thinking outside of the box. As we reported in October, Denver, Colorado is one such place. After the George Floyd protests sparked the debate the problem of police killing the mentally ill was pushed to the forefront of the conversation and many municipalities like Denver asked the question, should trained gunman, whose only tool is violent escalation, be the first line of response to those in a mental health crisis?

The obvious answer to that question is no. The over whelming majority of calls involving mentally ill people do not involve crimes, so why on Earth would we send in armed state agents to address them?

On June 1, Denver began the Support Team Assistance Response (STAR) program, which sends a mental health professional and a paramedic to some 911 calls instead of cops. When we first reported on the program in October, their results were fantastic. Now, it seems that departments who continue the old way are doing a disservice to the mentally ill.

According to their latest data, STAR has responded to more than 2,500 calls to 911 in which police would have normally been sent out. The STAR team — armed only with experience and compassion — has never once called police to back them up and no one was ever arrested.

They have settled every single call without killing someone, beating them, ruining their lives, or using violence. Imagine that.

“We’re really trying to create true alternatives to us using police and jails,” said Vinnie Cervantes with Denver Alliance for Street Health Response, one of the organizations that helped start the program.

“It really kind of proves that we’ve been working for the right thing, and that these ideas are getting the recognition they should,” Cervantes said.

This situation is a win win as it also frees up police time so they can focus on actual crimes like rape, theft, and violence.

Denver police responded to nearly 95,000 incidents over the same period, suggesting that an expanded STAR program could reduce police calls by nearly 3%, according to the report.

“Overall, the first six months has kind of been a proof of concept of what we wanted,” said Vinnie Cervantes, a member of Denver Alliance for Street Health Response, one of the organizations involved with the STAR program. “We’ve continued to try to work to make it something that is truly a community-city partnership.”

“It’s the future of law enforcement, taking a public health view on public safety,” Denver police Chief Paul Pazen said. “We want to meet people where they are and address those needs and address those needs outside of the criminal justice system.”According to a report in USA Today this week, data collected during the pilot program found that STAR calls were focused in certain areas of the city, and most were calls for trespassing and welfare checks. Approximately 68% of people contacted were experiencing homelessness, and there were mental health concerns in 61% of cases – largely schizoaffective disorder, bipolar disorder, and major depressive disorder – with 33% of people having co-occurring conditions, according to the report.

Carleigh Sailon from the Mental Health Center of Denver — who has responded to many of these calls, spoke to lx.com in October to explain the program’s success.

Those who have called for help or to report someone slumped against a fence, camped out on private property, or simply talking to themselves, are impressed when the STAR team shows up and resolves the problem without tasering, choking, or shooting anyone.

“We’ve gotten great feedback from the community, from individuals who’ve said that this felt really comfortable, really supportive, that we were able to show up and offer other solutions that were really helpful in that moment,” Sailon told lx.com. “People have been just overwhelmingly positive and very accepting of the options that we have to offer. And kind of surprised, I think, too, that a social worker and a medic kind of hop out of this van in street clothes and are there to help vs. police or an ambulance.”

When we hear catch phrases like “defund the police,” this is what it’s about. The apologist crowd says things like, “let me know how it turns out when you send a social worker to deal with a violent criminal” in an attempt to discredit this movement but as more cities like Denver continue to show a 100% non-violent success record, that crowd looks sillier and sillier.

Cities across the country are now researching and employing similar response teams for the mentally ill giving hope that the paradigm of killing people over their mental health, may soon come to an end.

For the coming year, Denver has allocated $1.4 million in the city’s budget to continue the STAR program, according to the report. The funding would be enough to purchase four additional vans and fund six new two-person teams, as well as a full-time supervisor, the report said

The idea of a state function shifting its focus from violence to compassion is revolutionary on many fronts. While a 100% success record nationwide is unlikely, it is obvious that this is the direction in which we need to head.