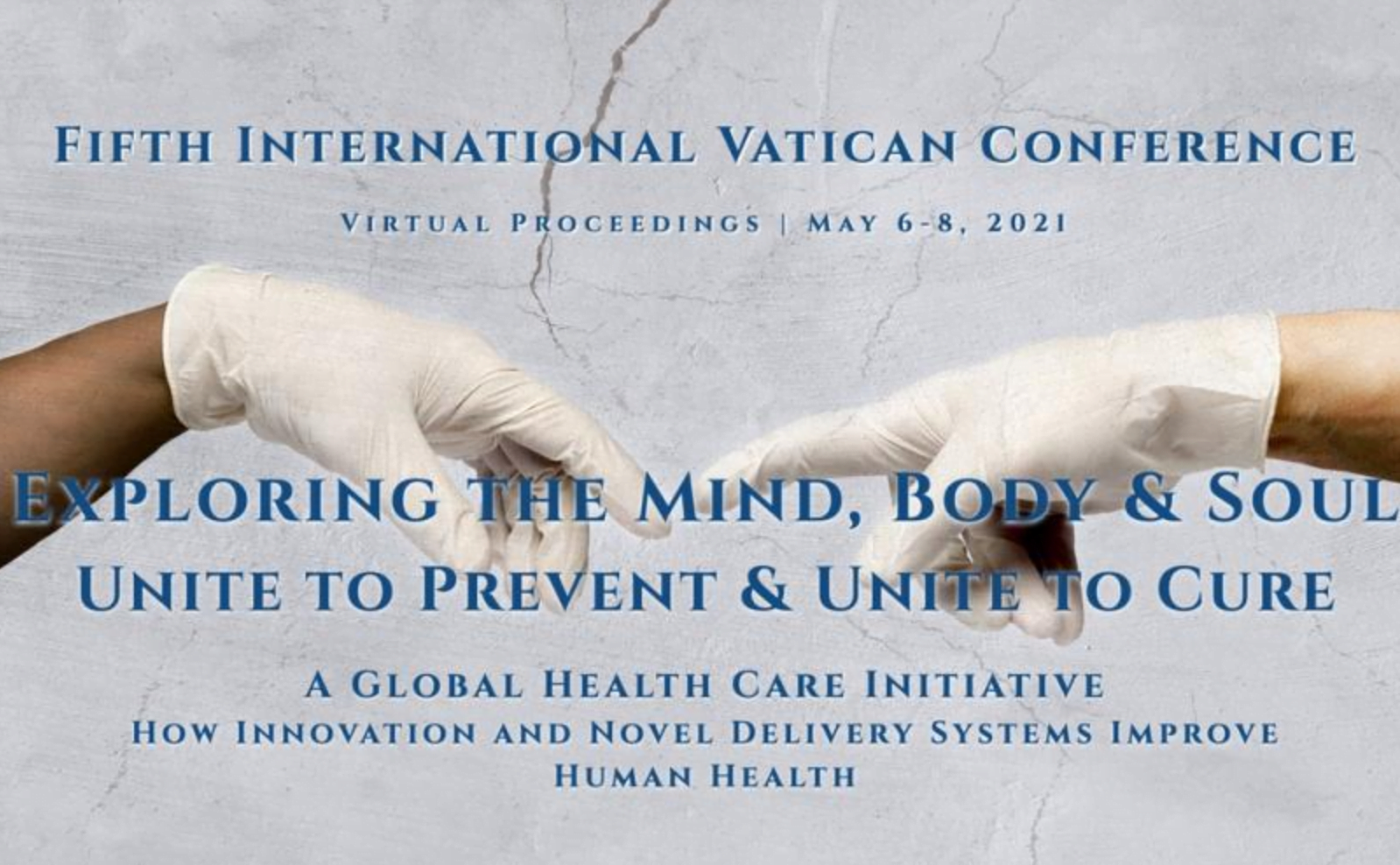 VATICAN CITY, April 15, 2021 (LifeSiteNews) – The Vatican has announced its fifth International Health Conference on “Exploring the Mind, Body & Soul,” and will host scores of globalist and abortion-promoting speakers such as Chelsea Clinton, the CEOs of abortion-tainted vaccine companies Pfizer and Moderna, the director of the U.S. National Institutes of Health, and Dr. Anthony Fauci.

The conference, entitled “Exploring the Mind, Body & Soul. How Innovation and Novel Delivery Systems Improve Human Health,” is due to take place May 6 through 8.

An incredible 114 speakers are set to appear at the event, which is hosted by the Pontifical Council for Culture, the Cura Foundation, the Science and Faith Foundation (STOQ), and Stem For Life (SFLF).

The speakers include prominent and diverse names such as the CEOs of Pfizer and Moderna, the former of which produces abortion pills; the Director of the National Institute of Health (NIH) Francis Collins, who advocates using fetal tissue in research projects; the head of Google Health, David Feinberg; and Dr. Anthony Fauci from the U.S. National Institute of Allergy and Infectious Diseases, whose advice to government officials played a major role in shutting down American churches last year.

NIH director Francis Collins has a long history of anti-life policies, and has previously acclaimed the “scientific benefits” which come from fetal tissue research, claiming that such work could be conducted “with an ethical framework.”

He is joined at the Vatican conference by Salesforce CEO, Marc Benioff, who has firmly aligned himself with the globalist, liberal elite, by banning emails from Republicans and the Trump campaign in the wake of the January 6 Capitol protests, as well as prohibiting all clients from even questioning the 2020 U.S. election. Benioff has a history of promoting LGBT issues, and is described by Time as “one of the most outspoken executives,” for LGBT affairs.

Numerous other medical professionals, representatives of U.S. federal agencies, university lecturers, high-ranking company officials, and musicians also form the number of speakers. There are only two Catholic clergy listed amongst the 114 speakers.

Taking place within Vatican City, the event is being promoted with the social media messaging of “#UniteToPrevent and #UniteToCure.”

The image promoting the conference (featured at the top of this article) appears to be based on Michelangelo’s famous depiction of the Creation of Adam. In the new image two hands reach towards each other, with both hands covered by disposable gloves.

Indeed, the logo for the conference is a circle of people linking hands, colored in the tones of the LGBT rainbow flag, and positioned next to the crossed keys and Papal tiara of the Pontiff.

The event is hosted by Cardinal Gianfranco Ravasi, the president of the Pontifical Council for Culture, along with the General Secretary of the STOQ Monsignor Tomasz Trafny, and Robin L. Smith, who is the founder, president and chairman of Cura Foundation and Stem for Life, and vice-president and director of STOQ.

However, the trio will not be moderating the event, as this role will fall to ten “world-renowned journalists,” such as the executive VP of Forbes Moira Forbes,, Katie Couric, and journalists from major left-wing media corporations such as CBS, CNN, MSNBC, and the Wall Street Journal.

Perhaps as a sign of the Vatican’s recent declaration of financial difficulties, the conference is supported by numerous large organizations such as Sanford Health, Akkad Holdings, John Templeton Foundation, vaccine company Moderna, and the Church of Jesus Christ of Latter Day Saints.

The first stated aim of the conference is to foster “open dialogue” and to nurture “an interdisciplinary approach to tackle major health care challenges around the globe.”

Given the minute presence of Catholic clergy at the conference, and the moderation by secular journalists, it remains to be seen whether this goal will reference to Catholic teaching on the relation between man and God, and whether it will ignore Catholic theological and philosophical thought regarding the soul.

Quoting from the document, the conference aims to “facilitate a conversation…‘about how we are shaping the future of our planet (…) which includes everyone, since the environmental challenge we are undergoing, and its human roots, concern and affect us all’.”

In the ten goals listed for the upcoming 2021 conference, the Pontifical Council for Culture made no reference to God or the Catholic Church.

As part of the conference, a smaller roundtable event will also take place, entitled “Bridging Science and Faith,” and is directed at the “relationship of religion and spirituality to health and wellbeing, including the relationship between mind, body and soul.”

The opening day of the conference will be headed by an intervention from Dr. Anthony Fauci, the director of the National Institute of Allergy and Infectious Diseases and President Joe Biden’s chief health advisor, who recently assured the World Health Organization of the Biden regime’s commitment to funding abortion, and last year suggested that sex with strangers was safer than receiving Holy Communion during COVID times.

Fauci has spent more than a year stoking fear in the American public over the Wuhan coronavirus, despite it only having an infection fatality rate of 0.15%, and able to be effectively treated using Ivermectin, Hydroxychloroquine, vitamin D, and zinc.

Topics for the conference range from “Are We What We Eat?” and “Human Enhancement,” to “Living Healthily to 120 and Beyond” and “Sustainable Health Care: Protecting Our Environment.”

Only six of the topics are remotely connected to religion, and deal with themes such as “Religious Dietary Practices and Health” and “How Do You Define the Soul?”

The conference will also address issues related to the current domination of global affairs by governmental responses to COVID-19.

Aided by the presence of the CEOs of both Pfizer and Moderna, whose abortion-tainted vaccines are increasingly followed by deaths and serious injuries in the thousands, the conference will discuss the “revolutionising” of cell therapy, as well as “Comprehensive COVID-19 Solutions” and “A New Generation of Vaccines.”

Pope Francis will close the event by giving the participants a private, virtual “audience.”

With the first such conference taking place back in 2011, previous events have seen individuals such as pro-LGBT pop star Katy Perry addressing attendees on the subject of transcendental meditation.

This year’s iteration of the event has the largest number of speakers by far, and with its advertised line up of speakers and topics, looks set to continue the irreligious and anti-Catholic themes of previous conferences.

Already, faithful Catholics have taken to social media to express their consternation at the conference. Commenting on the manipulated image of the Creation of Adam, U.K. commentator Deacon Nick Donnelly, wrote: “The Vatican’s pastiche of Michelangelo’s Creation of Adam exposes their promotion of ‘a pseudo-messianism by which man glorifies himself in place of God’ (CCC 675).”

In a comment provided to LifeSiteNews, Deacon Donnelly said that Pope Francis’s condemnations of abortion are undermined by the choice of speakers due to appear at the event.

There is a strange disjunction between Pope Francis’ words about abortion and his actions.  While Pope Francis has issued some very strong statements condemning abortion these have been gravely undermined by his actions.

In 2016 he publicly praised Emma Bonino who boasts about facilitating 10,000 illegal abortions and who spearheaded the legalisation of abortion in Italy.

In 2018 he gave a major papal honor to the Dutch militant abortion activist Lilianne Ploumen, six months after she led a campaign to raise $300 million to fund abortions around the world.

In 2020 the world’s media trumpeted the pope accepting the use of cell lines in COVID vaccines that originate from aborted babies.

Now he’s welcoming to the Vatican, Chelsea Clinton, the vice-president of the Clinton Foundation that has deep ties with industrial scale abortionists Planned Parenthood, and the CEO’s of Moderna and Pfizer, experimenters on aborted babies.

The inclusion of prominent abortion advocates such as Chelsea Clinton as speakers at the Vatican’s Conference is another body blow to the Church’s prophetic witness against the abominable crime of murdering pre-born babies.

In the case of abortion, actions really do speak louder than words.

Similar concerns were expressed by Restoring the Faith Media, who noted how “The COVID Religion appears to have eclipsed the Catholic Faith in Rome. Complete with its own liturgy (socialist distancing), sacramentals (masks, hand sanitizer), and even its own sacraments (unless you inject this tainted serum, you have no life in you), the overt mockery of the faithful is on full display.”

A representative of Restoring the Faith commented to LifeSite: “Rather than correcting course, officials in the Eternal City appear to be accelerating towards that Great Apostasy Our Lady warned us would someday be upon us.