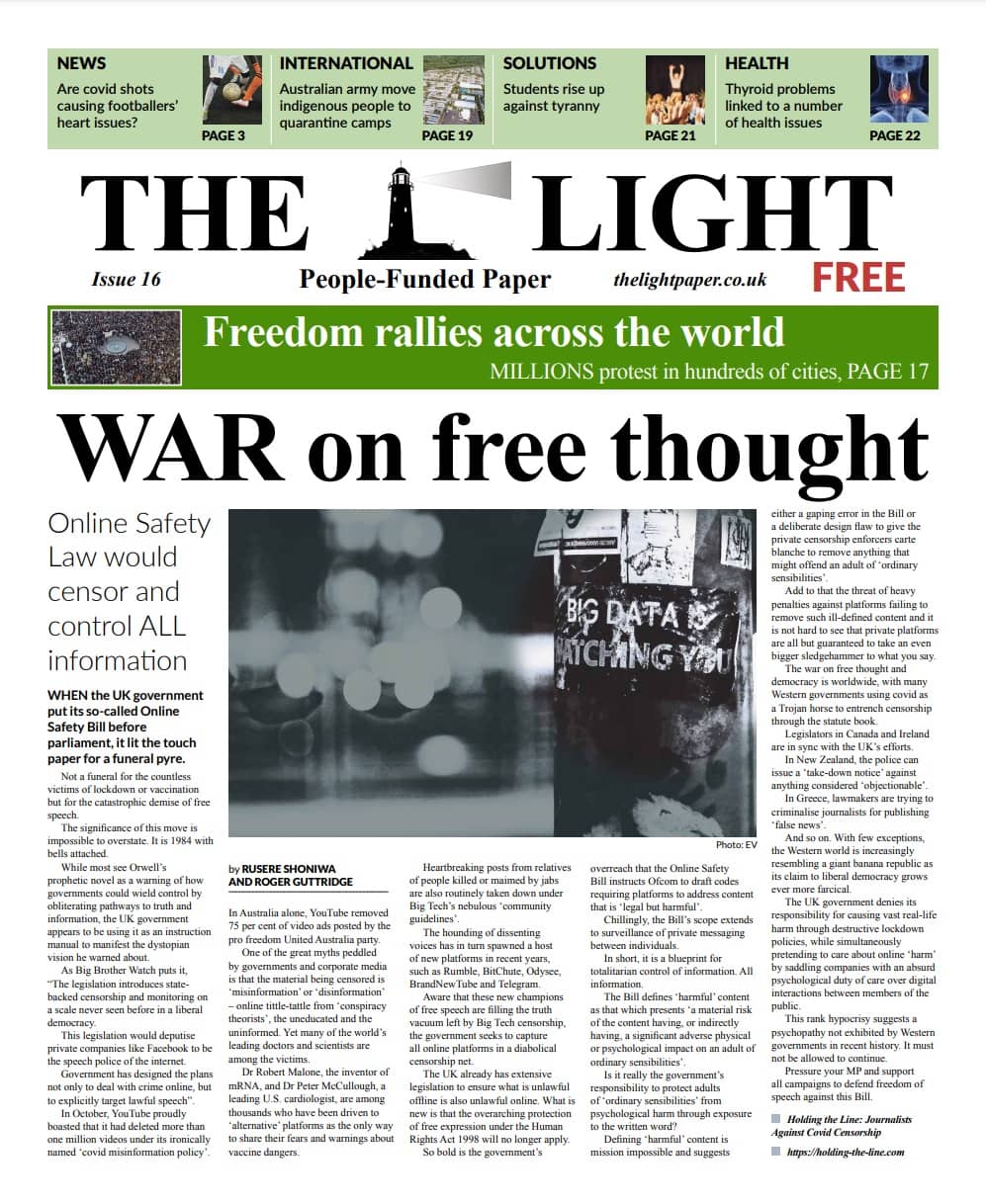 I am delighted to have made my first contribution to The Light newspaper, and it’s the front page lead (see attached), researched and written jointly with my Holding the Line colleague Rusere Shoniwa. The Light is the UK’s fastest growing newspaper by a long way, up from a print run of 20,000 for issue 1 last year to 275,000 for issue 15 in November. That’s already more than some national papers’ daily circulations and the Light’s publisher is now confidently targeting 1 million copies at some point. It shows how much demand there is from a public starved of truth and balance in the mainstream media.

The December issue and all back numbers can be read for free online at thelightpaper.co.uk. Or you can subscribe to a printed copy for £5 a month, including p&p. All contributions are written by motivated volunteers. No-one is getting paid.

Other topics covered in the December issue include the 500% increase in footballers and other sports people who are experiencing heart issues, in some cases fatally so (p3); a new study in the American Heart Association journal showing that mRNA vaccines double the chances of a heart attack (p4); the battle for justice for care home staff who lost their jobs due to vaccine coercion (p3); and the thousands of miscarriages that are occurring in pregnant woman following vaccination (p18).

Holding the Line, meanwhile, is now posting stuff on our new website (holding-the-line.com), Telegram channel, Twitter feed and Odysee channel. We are also being contacted every week by journalists and other media professionals not only in the UK but other countries. We now have members in the US, Canada, France, Italy, Croatia and New Zealand.

The full article as it appears in the paper:

When the UK government put its so-called Online Safety Bill before Parliament, it lit the touch paper for a funeral pyre.

Not a funeral for the countless victims of lockdown or vaccination but for the catastrophic demise of free speech.

It’s a move whose importance is impossible to overstate. It’s Nineteen Eighty-Four with bells attached.

While most see Orwell’s prophetic novel as a warning of how governments could wield control by obliterating pathways to truth and information, the UK government appears to be using it as an instruction manual to manifest the dystopian vision he warned about.

As Big Brother Watch succinctly puts it, “The legislation introduces state-backed censorship and monitoring on a scale never seen before in a liberal democracy.

“Government has designed the plans not only to deal with crime online, but to explicitly target lawful speech.”

In October 2021, YouTube’s proudest boast was that it had deleted more than 1 million videos under its ironically named “Covid misinformation policy”.

One of the great myths peddled by governments and mainstream media is that the material being censored is “misinformation” or “disinformation” – online tittle-tattle from conspiracy theorists, the uneducated and the uninformed.

What millions have yet to grasp is that many of the world’s leading doctors and scientists are among the victims.

Dr Robert Malone, the inventor of mRNA, and Dr Peter McCullough, a leading US cardiologist, are among thousands who have been driven to “alternative” platforms as the only way to share their fears and warnings about vaccine dangers.

Heart-breaking posts from relatives of people killed or maimed by jabs are also routinely taken down under Big Tech’s nebulous “community guidelines”.

The hounding of dissenting voices has in turn spawned a host of new platforms such as Rumble, Bitchute, Odysee, BrandNewTube and Telegram.

Aware that these new champions of free speech are filling the truth vacuum left by Big Tech censorship, the government seeks to capture all platforms in a diabolical censorship net.

The UK already has extensive legislation to ensure that what’s unlawful offline is unlawful online.

What’s new is that the overarching protection of free expression under the Human Rights Act 1998 will no longer apply.

So bold is the government’s overreach that the Online Safety Bill instructs Ofcom to draft codes requiring platforms to address content that is “legal but harmful”.

Chillingly, the Bill’s scope extends to surveillance of private messaging between individuals.

In other words, it’s a blueprint for totalitarian control of information. All information.

The Bill defines “harmful” content as that which presents “a material risk of the content having, or indirectly having, a significant adverse physical or psychological impact on an adult of ordinary sensibilities”.

Is it really the government’s responsibility to protect adults of “ordinary sensibilities” from psychological harm through exposure to the written word?

Defining “harmful” content is mission impossible and suggests either a gaping error in the Bill or a deliberate design flaw to give the private censorship enforcers carte blanche to remove anything that might offend an adult of “ordinary sensibilities”.

Add to that the threat of heavy penalties against platforms failing to remove such ill-defined content and it’s not hard to see that private platforms are all but guaranteed to take an even bigger sledgehammer to online content.

The war on free speech and democracy is global, with many Western governments using Covid as a trojan horse to entrench censorship through the statute book.

Legislators in Canada and Ireland are in sync with the UK’s efforts.

In New Zealand, the police can issue a “takedown notice” against anything considered “objectionable”.

In Greece lawmakers are trying to criminalise journalists for publishing “false news”.

And so on. With few exceptions, the Western world is increasingly resembling a giant banana republic as its claim to democracy grows ever more farcical.

The UK government denies its responsibility for causing real-life harm to vast numbers through destructive lockdowns while simultaneously pretending to care about online “harm” by saddling companies with an absurd psychological duty of care over digital interactions between members of the public.

This rank hypocrisy suggests a psychopathy not exhibited by Western governments in recent history. It must not be allowed to continue.

Write to your MP and visit Big Brother Watch to help their campaign to defend freedom of speech.