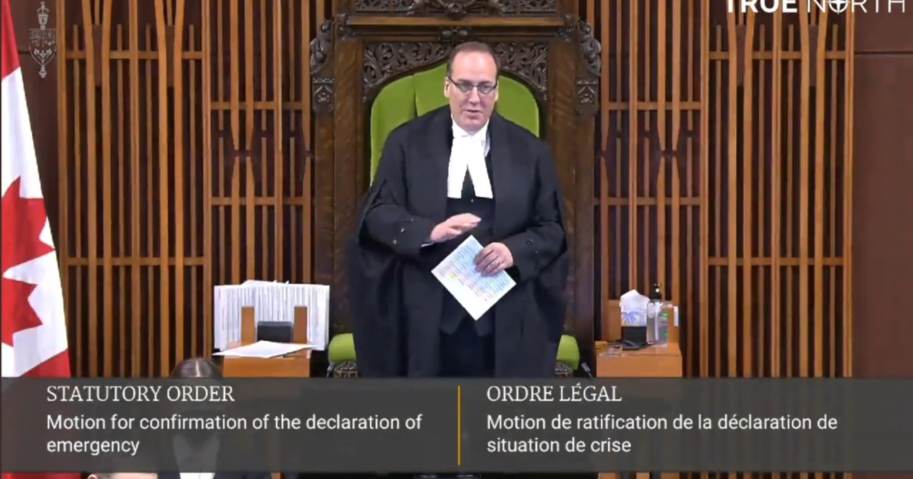 Even elected officials aren’t allowed to ask some questions.

But – as one member quickly found out – if you don’t show up, you can be silenced much easier.

During the session, Oshawa MP Colin Carrie had his feed cut by the Speaker of the House after asking about “outside influence” – specifically, Klaus Schwab – potentially corrupting the Canadian Government.

Carrie asked the legislators point-blank about why Schwab has been “bragging” about “infiltrating governments around the world,” including over “half of Canada’s cabinet,” but the feed cuts out before he can finish his full statement – right after he asks which specific members are in league with Schwab’s World Economic Forum.

As the feed cuts out, the Visibly panicked Speaker quickly shouts for “order” as he waves his hands and claims a “very very very bad audio” connection was to blame for Carrie going dark. Then – as if the question had never even been asked – he attempts to move along to the next topic.

Unbelievably, the next MP to speak – NDP’s Charlie Angus – was so outraged over the question that he angrily accuses Carrie of spreading “misinformation.”

On behalf of a constituent, Conservative MP Colin Carrie asks about the World Economic Forum’s influence on Canadian politicians. He gets cut off and NDP MP Charlie Angus says Carrie is spreading “disinformation." pic.twitter.com/LKWMPDyLFW

As for Angus’ baseless claim of ‘misinformation,” here is a video of Schwab bragging about having Trudeau and the Canadian Government’s “loyalty” and calling the Canadian PM the best representation of the WEF’s dystopian agenda.

Carrie’s questions are completely valid, and, after all, he was just asking.

Klaus Schwab on Trudeau's loyalty to the World Economic Forum & not to the Canadian people. pic.twitter.com/8VaTKMAnb6

Here is another video where Schwab openly brags about corrupting governments by infiltrating from within by using graduates of the WEF Young Global Leaders Program – like Trudeau and Canada’s Finance Minister Chrystia Freeland.

“What we are very proud of, is that we penetrate the global cabinets of countries with our WEF Young Global Leaders.”

“What we are very proud of, is that we penetrate the global cabinets of countries with our WEF Young Global Leaders… like Trudeau”pic.twitter.com/D6odR5mqI6