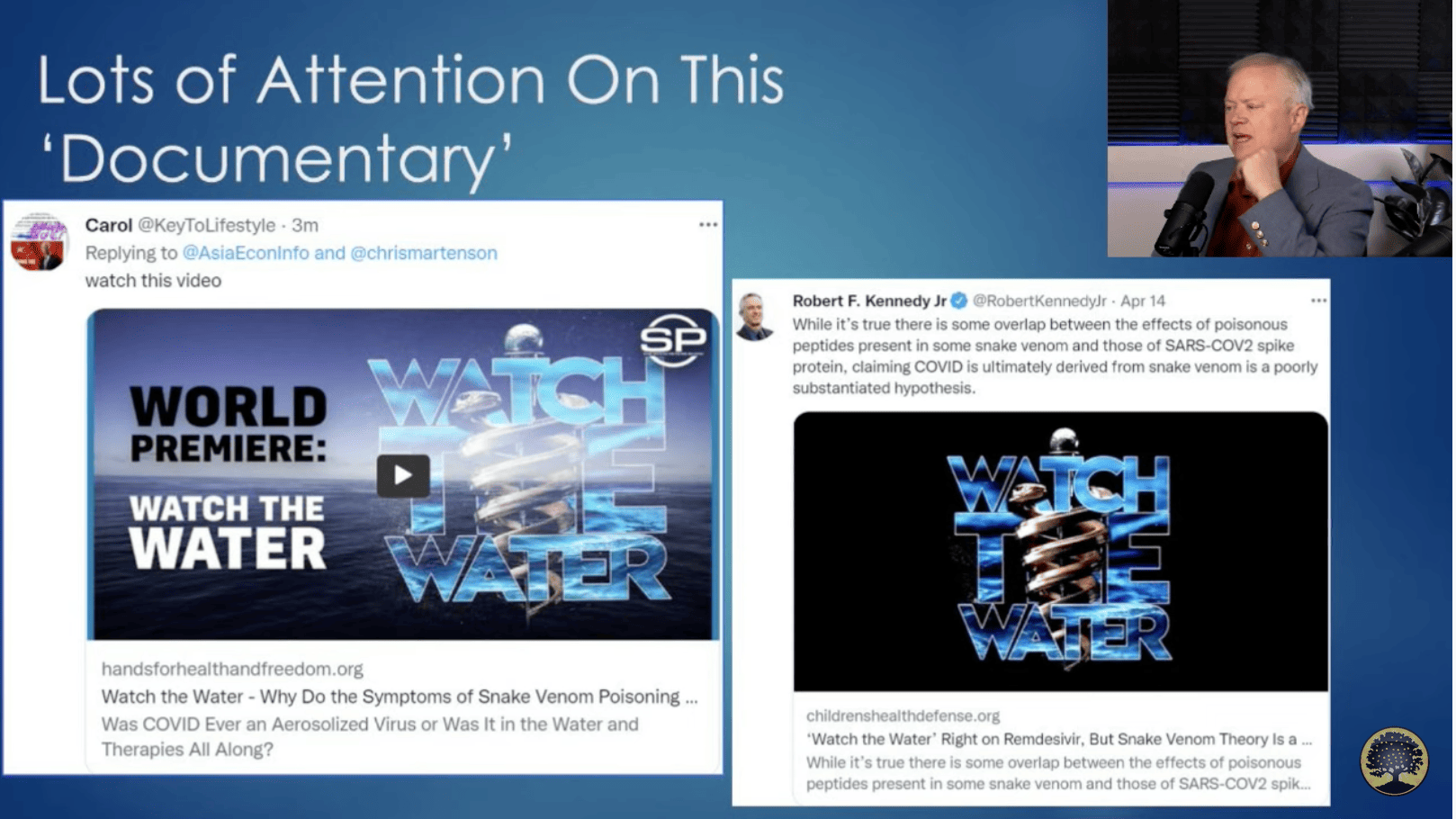 “Watch the Water” is a hugely successful/popular “documentary” that purports that Remdesivir is actually snake venom, and that what we call Covid is really people’s reactions to snake venom. Worse, that municipal water systems are the means for distributing the toxins to people. Leave aside that snake venom could not be produced in such quantities as to poison entire nations. Leave aside that snake venom wouldn’t survive a trip through stomach acid. What about all the people who have well water that still got sick? Snake venom. Graphene and Nanotechnology. These are the latest conspiracies that could be planted into the ether as a way to discredit anyone opposed to mandates and experimental vaccines. Don’t be fooled, BUT more importantly, don’t allow yourself to made into a fool. These theories are easily destroyed with a little bit of simple science, doing a bit of research, and deductive reasoning,  yet somehow they gain traction in the public. My hypothesis: if I had an unlimited budget to promote my highly profitable vaccines, I’d pay my public relations teams to start whisper campaigns and plant false narratives that embarrass our opponents. The trick is to take down the truth you don’t want in the public eye by attaching it to an obvious falsehood and then sinking both of them at the same time. Politicians and the media do it every year during campaign season. (Congressman Matt Gaetz has been accused of deviant sex crimes by the New York Times and his political opponents, but one year later, not a single law enforcement agency has charged the Republican.) And there is no doubt corporations engage in these kinds of espionage/psyops campaigns. So, doesn’t it make sense that billion-dollar corporations could work to protect billion-dollar profits by anonymously planting these outlandish conspiracies? I may be wrong, but I’m not confused. If you buy into these myths when there is no actual, simple scientific effort to prove or disprove them, you play into the hands of the same people that wanted to dismiss and de-platform you for thinking Covid could originate from a Wuhan lab. The lab leak claims included irrefutable, solid evidence exposing the idea. There is zero backing that covid was derived from a snake. Are there elements that might look like a connection? Sure. But they are subtle and indicate areas of further inquiry that might be fruitful. However, by declaratively spinning an entire (and false) narrative about how Covid is actually snake venom those ideas will be buried in the ridicule that is sure to arise. In our latest video, I’ll take you through what reasonable research, inquiry and due diligence actually look like. My aim is to prevent you from being taken in by a very shoddy piece of investigative work, bad science, and faulty logical conclusions.