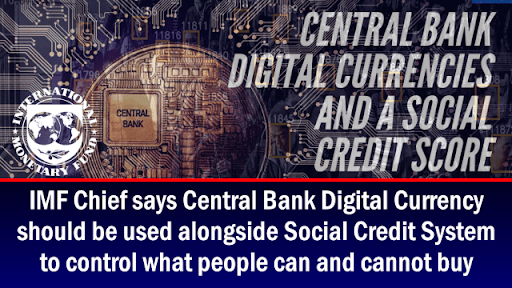 The deputy managing director of the International Monetary Fund (IMF) recently explained how Central Bank Digital Currencies (CBDC) can be programmed to determine what people are allowed to buy and insisted they should be used alongside a China-style Social Credit Score system.

Unlike cryptocurrency, which is private, Central Bank Digital Currency (CBDC) will be issued and controlled by the central banks themselves.

In many ways, it’s the same as banknotes, but that every single transaction will be monitored for compliance.

By ‘Sikh for Truth’ of Truth Talk

The meeting was about global financial inclusion, which they said had improved over the past ten years, but almost a quarter of the world’s adult population are still unbanked.

It’s hoped that central bank digital currencies would be affordable, widely accepted, and safe instruments, which would address some of the issues surrounding financial inclusion, among other things.

The live stream went under the radar for many but our buddy Tim Hinchliffe over at The Sociable kept an eye on what was going on. Tim posted a video of Bi Li, the Deputy Managing Director of the IMF, explaining how CDBSs can be programmed.

“With CBDCs, we can precisely control what people can and can’t own. Also, what kind of use this money can be programmed for, like food only.” – Bi Li

The key word he used was programmability.

Bo li went on to say that because of this potential programmability, government agencies could precisely target support packages to the right people.

He went on to say that: “CBDCs can’t solve every financial inclusion challenge, but they can work together with financial literacy and digital literacy.”

So, a CBDC would work with other policies like digital identities and digital wallets.

This goes hand in glove with what the World Bank Group described in November 2021. “Digital identity verification is essential to the operation of CBDCs, particularly in cross-border transactions. “

“Tradable digital assets must be tied to a digital identity system, which in turn should be tied to an automatic KYC and AML/CFT verification system.“

“This is a foundational step to the potential use of CBDCs, and emerging developments in regulatory and compliance technology may benefit central banks’ experiments in the digital currency space.”

Bo li described a CDBC as an eco-system, and that the data it would produce would be very valuable to third parties.

When questioned on how this transactional data could be used, Bo Li explained: “I can give you one example in China, those transaction data can be utilised by service providers in credit underwriting.”

Underwriting is the process by which the lender decides whether an applicant is creditworthy and should receive a loan.

“Those transaction data in terms of how many coffees I drink every day, where I buy coffee, do I use UBER every day and what kind of working hours I have.”

He continues to say that this “will create value in addition to finance and that data can be very profitable, and that’s the value we are talking about to make it attractive to private sector players to join this eco system.”

It’s like the Chinese model, but every country has the option to do it differently. There is limited privacy. The IMF, World Bank, and BIS are also managing many central banks on these new products.

“What we just heard from Bo about credit scoring was a very good example of how different countries will take different journeys to a ‘new world’ where they serve their societies in the digital space.”

“We will all have different preferences and this preference on privacy or anonymity is tricky”.

And she continued to say, “That its worth to give up a little bit of privacy to get security”.

We’ve heard that before, right?

Sharing of transactional data was further emphasized by Her Majesty Queen Máxima of the Netherlands in her opening remarks. She said: “A good design of CDBC could give people more control of their transactional data and their ability to share it with a wider set of financial sector providers”.

Most recently according to Federal Reserve Chairman Jerome Powell, CBDCs won’t be anonymous and will be identity-verified, so their transactions will be made public, supposedly to these third parties.

Let’s not forget that earlier this year at the World Government Summit aptly titled a ‘New World Order’, the economist Pippa Malmagren dropped the beans saying that:“We are on the brink of a dramatic change; we are about to abandon the traditional system of money and replace it with a new one, Digital Blockchain CBDC, which will give us greater clarity over every single transaction.”That’s right every single transaction would be made available to the Central Banks and their private service providers for this credit scoring.

As well as programmability another potential downside to having a CDBC is that, like China, the global west can shut off your digital wallet if you protest or speak negatively about the global elites. As was the case recently in China. The authorities’ response to any civil disobedience can be swift and broad.

Globalists want centralized control and dominance structures where everything is tracked and surveilled instead of a decentralised and private system of digital money and identity.

They’re not joking! The parameters they set for CBDC digital currency will nudge our behaviours through social scoring, to control society.