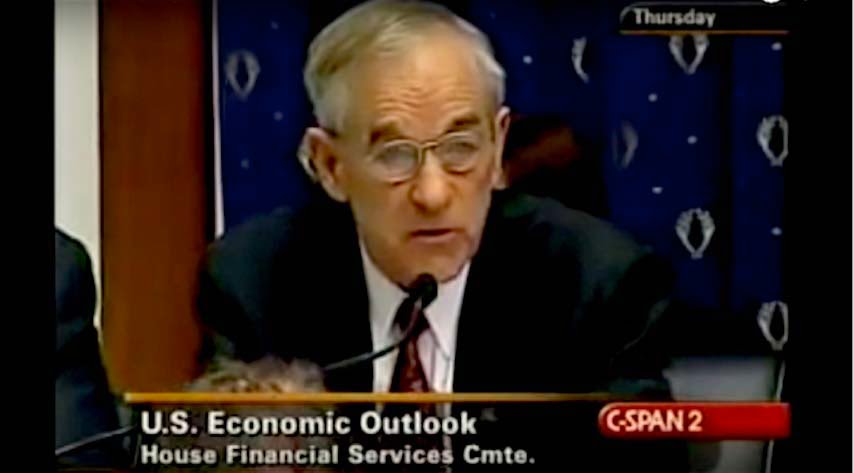 The chaos that one day will ensue from our 35-year experiment with worldwide fiat money will require a return to money of real value. We will know that day is approaching when oil-producing countries demand gold, or its equivalent, for their oil rather than dollars or euros. The sooner the better. – Ron Paul

Ron Paul is calling for the end of the petrodollar system. This system is one of the main reasons the U.S. dollar is the world’s premier reserve currency.

Essentially, Paul is saying that understanding the petrodollar system and the forces affecting it is the best way to predict when the U.S. dollar will collapse.

Paul and I discussed this extensively at one of the Casey Research Summits. He told me he stands by his assessment.

This is critically important. When the dollar loses its coveted status as the world’s reserve currency, the window of opportunity for Americans to protect their wealth from the U.S. government will definitively shut.

At that point, the U.S. government will implement the same destructive measures other desperate governments have used throughout history: overt capital controls, wealth confiscation, people controls, price and wage controls, pension nationalizations, etc.

The dollar’s demise will wipe out the wealth of a lot of people. But it will also trigger political and social consequences likely to be far more damaging than the financial fallout.

The two key takeaways are:

The U.S. dollar’s status as the premier reserve currency is tied to the petrodollar system.

The sustainability of the petrodollar system relies on volatile geopolitics in the Middle East (where I lived and worked for several years).

From Bretton Woods to the Petrodollar

The Bretton Woods international monetary system, which the Allied powers created in 1944, turned the dollar into the world’s premier reserve currency.

After WWII, the U.S. had by far the largest gold reserves in the world (around 706 million ounces). These large reserves – in addition to winning the war – allowed the U.S. to reconstruct the global monetary system around the dollar.

Countries around the world stored dollars for international trade or to exchange with the U.S. government at the official rate for gold ($35 an ounce at the time).

By the late 1960s, excessive spending on welfare and warfare, combined with the Federal Reserve monetizing the deficits, drastically increased the number of dollars in circulation relative to the gold backing them.

Naturally, this made other countries exchange more dollars for gold at an increasing rate. This drained the U.S. gold supply. It dropped from 706 million ounces at the end of WWII to around 286 million ounces in 1971 (a figure supposedly held constant to this day).

To stop the drain, President Nixon ended the dollar’s convertibility for gold in 1971. This ended the Bretton Woods system.

In other words, the U.S. government defaulted on its promise to back the dollar with gold. This eliminated the main motivation for other countries to hold large U.S. dollar reserves and use the U.S. dollar for international trade.

With the dollar no longer convertible into gold, demand for dollars by foreign nations was sure to fall, and with it, the dollar’s purchasing power.

OPEC, a group of oil-producing countries, passed numerous resolutions after the end of Bretton Woods, stating its need to maintain the real value of its earnings. It even discussed accepting gold for oil. Ultimately, OPEC significantly increased the nominal dollar price of oil.

For the dollar to maintain its status as the world’s reserve currency, the U.S. would have to concoct a new arrangement that gave foreign countries a compelling reason to hold and use dollars.

From 1972 to 1974, the U.S. government made a series of agreements with Saudi Arabia. These agreements created the petrodollar system.

The U.S. government chose Saudi Arabia because of its vast petroleum reserves, its dominant position in OPEC, and the (correct) perception that the Saudi royal family was corruptible.

In essence, the petrodollar system was an agreement that the U.S. would guarantee the survival of the House of Saud. In exchange, Saudi Arabia would:

Use its dominant position in OPEC to ensure that all oil transactions would happen in U.S. dollars.

Invest a large amount of its dollars from oil revenue in U.S. Treasury securities and use the interest payments from those securities to pay U.S. companies to modernize the infrastructure of Saudi Arabia.

Guarantee the price of oil within limits acceptable to the U.S. and prevent another oil embargo by other OPEC members.

Oil is the world’s most traded and most strategic commodity. Needing to use dollars for oil transactions is a very compelling reason for foreign countries to keep large U.S. dollar reserves.

For example, if Italy wants to buy oil from Kuwait, it has to purchase U.S. dollars on the foreign exchange market to pay for the oil first. This creates an artificial market for U.S. dollars that would not otherwise exist.

The demand is artificial because the U.S. dollar is just a middleman in a transaction that has nothing to do with a U.S. product or service. Ultimately, it translates into increased purchasing power and a deeper, more liquid market for the U.S. dollar and U.S. Treasuries.

Additionally, the U.S. has the unique privilege of not having to use foreign currency to buy imports, including oil. Instead, it gets to use its own currency, which it can print.

It’s hard to overstate how much the petrodollar system benefits the U.S. dollar. It’s allowed the U.S. government and many Americans to live beyond their means for decades.

What to Watch For

The geopolitical sands of the Middle East are rapidly shifting.

Saudi Arabia’s strategic regional position is weakening. Iran, which is notably not part of the petrodollar system, is on the rise. U.S. military interventions are failing. And the emerging BRICS countries are creating potential alternatives to U.S.-dominated economic/security arrangements. This all affects the sustainability of the petrodollar system.

I’m watching the deteriorating relationship between the U.S. and Saudi Arabia with a particularly close eye.

The Saudis are furious because they don’t think the U.S. is holding up its end of the petrodollar deal by more aggressively attacking their regional rivals.

This suggests that they might not uphold their part of the deal much longer, namely selling their oil exclusively in U.S. dollars.

The Saudis have even suggested a “major shift” is under way in their relationship with the U.S. To date, though, they haven’t matched their words with action, so it may just be a temper tantrum or a bluff.

The Saudis need an outside protector. So far, they haven’t found any suitable replacements for the U.S. In any case, they’re using truly unprecedented language.

This situation may reach a turning point when U.S. officials start expounding on the need to transform the monarchy in Saudi Arabia into a “democracy.” But don’t count on that happening as long as Saudi oil sells exclusively for U.S. dollars.

Regardless, the chances that the Kingdom might implode on its own are growing.

For the first time in decades, observers are calling into question the viability of the Saudi currency, the riyal. The Saudi central bank currently pegs the riyal at a rate of 3.75 riyals per U.S. dollar.

The Saudi government spends a ton of money on welfare to keep its citizens sedated. Lower oil prices plus the cost of their mischief in the region are cutting deep into government revenue. So there’s less money to spend on welfare.

There’s a serious crunch in the Saudi budget. They’ve only been able to stay afloat by draining their foreign exchange reserves. That threatens their currency peg.

Recently, Saudi officials have begun telling the media that the currency peg is fine and there’s nothing to worry about. That’s another clue that there’s trouble. Official government denial is almost always a sign of the opposite. It’s like the old saying: “Believe nothing until it has been officially denied.”

If there were a convenient way to short the Saudi riyal, I would do it in a heartbeat.

Long before Nixon ended the Bretton Woods system in 1971, it was clear that a paradigm shift in the global monetary system was inevitable.

Today, another paradigm shift seems inevitable. As Ron Paul explained, there’s one sure way to know when that shift is imminent:

We will know that day is approaching when oil-producing countries demand gold, or its equivalent, for their oil rather than dollars or euros.

It’s very possible that, one day soon, Americans will wake up to a new reality, just as they did in 1971 when Nixon severed the dollar’s final link to gold.

The petrodollar system has allowed the U.S. government and many U.S. citizens to live way beyond their means for decades. It also gives the U.S. unchecked geopolitical leverage. The U.S. can exclude virtually any country from the U.S. dollar-based financial system…and, by extension, from the vast majority of international trade.

The U.S. takes this unique position for granted. But it will disappear once the dollar loses its premier status.

This will likely be the tipping point…

Afterward, the U.S. government will be desperate enough to implement capital controls, people controls, nationalization of retirement savings, and other forms of wealth confiscation.

I urge you to prepare for the economic and sociopolitical fallout while you still can. Expect bigger government, less freedom, shrinking prosperity…and possibly worse.

It’s probably not going to happen tomorrow. But it’s clear where the trend is headed.

Once the petrodollar system kicks the bucket and the dollar loses its status as the world’s premier reserve currency, you will have few, if any, options to protect yourself.

This is why it’s essential to act before that happens.

The sad truth is, most people have no idea how bad things could get, let alone how to prepare…

Yet there are straightforward steps you can start taking today to protect your savings and yourself from the financial and sociopolitical effects of the collapse of the petrodollar.

This recently released video features at the top of this page will show you where to begin. Watch it now.