There are two parts to this Peace Action – to have millions of people join us on March 21st for the “Levitate the US Meditation,” and to encourage a grassroots movement of people attending upcoming Donald Trump (and other Presidential candidates) rallys wearing the T-shirt (see picture below) “Meditating For Peace.” Can you imagine what would happen if the cameras focused on a group of people at every rally wearing these shirts and meditating during the events?

Perhaps the most important synchronized meditation you will ever be part of!
You are not going to believe where James Twyman is going for this important synchronized meditation – A DONALD TRUMP RALLY. (And you thought Syria was dangerous.)
Love the US or hate the US, you can’t deny how important the United States is to the world. With the strongest military and the largest economy, the decisions that are made here impact every person on the planet. Even if you don’t live in the US, we need your support.
Lately, as hard as it is to watch, it seems the US government and many of its citizens have gone completely insane. In fact, the leading Republican candidate believes that quoting Mussolini, banning Muslims from the US and insulting entire nations is the path to being elected President.
Scarier still is that so many people are listening! It’s time for conscious people from every country to unite in bringing sanity back to the US. It’s time for a worldwide synchronized meditation focused on elevating all the candidates for US President.

On MARCH 21 James Twyman will at a Donald Trump rally, and millions of people will be sending prayers of peace not only to those present, but to the entire US. This email is meant to plant the seed and start getting all of you excited about the possibility of a massive, prayerful response to the strange happenings in the election for US President. We will announce the exact time and place of the rally as information becomes available. GET READY! 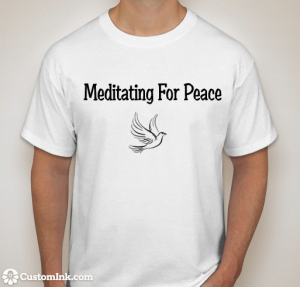 Imagine…
…what would happen if a handful of people were present at every Donald Trump rally wearing a T-shirt that says simply: Meditating For Peace. They won’t say a word, just sit quietly and pray during the speeches. And what if every time it happens thousands of people from around the world participated energetically? You’re invited to join James Twyman at the rally on March 21st (city to be announced) and at every rally in the next several months. Our goal is to inspire Peaceful Sit-ins at every Donald Trump event, as well as other candidates for President. We will continue to share information and ways to make T-shirts and attend the rallys. 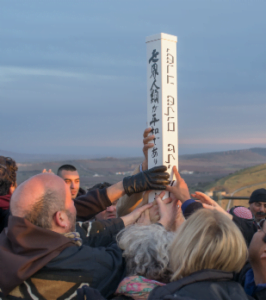 Planetary Heart Meditation, March 11-13
Spread the word. Three and a half million people will be on the ground in New Delhi, India from March 11 – 13, and over ten million people will be meditating from around the world. We are asking our Peace Partner Network to join them at NOON in your local time zone for ten minutes of meditation each day. This is our chance to send energy directly into the heart of Mother India, and in doing so, impact the entire planet. JOIN US!
CLICK HERE TO SEE THE VIDEO – go to link here: