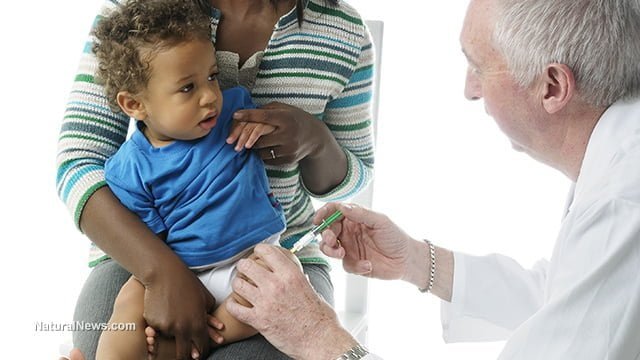 Wealthy countries that require the highest number of vaccines for children under the age of 1 also have the highest rates of death in that age group, according to a study conducted by an independent computer scientist and a researcher from the Think Twice Global Vaccine Institute, and published in the journal Human & Experimental Toxicology in 2011.

The study stemmed from the recognition that while the U.S. vaccine schedule calls for more vaccine doses than any other country, the United States still ranks 34th among nations in terms of infant mortality.

For the purposes of the study, the researchers defined a “vaccine dose” as “an exact amount of medicine or drug to be administered.” Thus, triple vaccines such as DTaP or MMR are each considered to be three vaccine doses, since three drugs are being given at the same time.

The U.S. vaccine schedule calls for 26 vaccine doses before age 1.

The researchers collected infant mortality rates (IMRs) for the top 34 countries in the world. Four of the countries – Andorra, Liechtenstein, Monaco and San Marino – had so few infant deaths (fewer than five) that their IMRs were considered statistically unreliable, so these countries were excluded from the analysis.

In fact, most of the vaccines recommended for children under age 1 are not intended to prevent diseases that are dangerous in that age group. Instead, U.S. vaccine policy emphasizes vaccinating children at as young an age as possible, including against diseases that are only dangerous later in life.

What is causing these deaths?

The researchers noted that many factors contribute to IMR, which is considered one of a country’s most important public health indicators. Poor countries tend to have high IMRs because of the absence or poor distribution of basic health services and infrastructure, including sanitation. Infectious diseases tend to be more common in these countries, largely because of that same poor health infrastructure and poor nutrition.

In wealthier countries, however – such as those examined in the current study – the factors contributing to IMRs may be less clear. For example, the United States saw an increase in premature births between 1990 and 2006, but this increase is not sufficient to explain the country’s unusually high IMR for a wealthy nation.

“It appears that at a certain stage in nations’ movement up the socio-economic scale—after the basic necessities for infant survival (proper nutrition, sanitation, clean water, and access to health care) have been met—a counter-intuitive relationship occurs between the number of vaccines given to infants and infant mortality rates: nations with higher (worse) infant mortality rates give their infants, on average, more vaccine doses,” the researchers wrote.

“This … elicits an important inquiry: are some infant deaths associated with over-vaccination?”

“These examples appear to confirm that IMRs will remain high in nations that cannot provide clean water, proper nutrition, improved sanitation, and better access to health care,” the researchers noted.