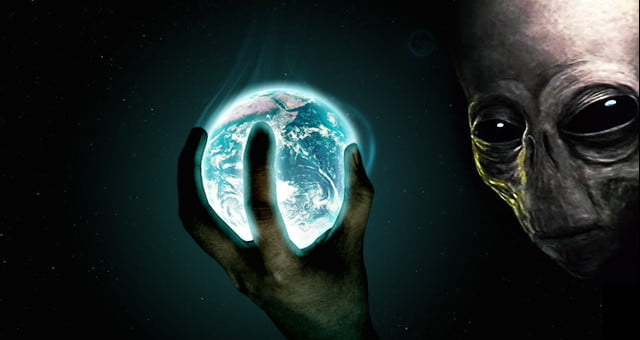 Is the world economy a closed system or an open system? In other words, are the world’s financial elite conducting transactions with off-planet entities, enslaving the human race to unseen actors?

The world’s people are held in perpetual bondage to the fiat currency money masters who have saddled us with absolutely insurmountable debt obligations which are mathematically impossible to repay. At present, the CIA estimates the total global debt to be nearing $90 trillion.

“In 2013, according to the CIA’s World Factbook, the GWP totalled approximately US $87.25 trillion in terms of purchasing power parity (PPP), and around US $74.31 trillion in nominal terms.” [Source]

The gross world product, the nominal value of planetary human endeavor per year, was recentlyestimated at $78 trillion, meaning nearly an entire year of the productivity of every man, woman and child on planet earth, some 7.4 billion people, is owed to someone, but who exactly no one really knows for sure. How is this possible?

As nations like Greece are forced into austerity and unnecessary hardship by private banks, it is becoming ever more clear to the people of the world that debt-based currency is being used to conquer nations and enslave free people. The fiat money scheme is so absurd, so detrimental to human progress, that any sane person has to wonder why the global debt cannot just be written off with a few key strokes, allowing the world’s economy to again thrive.

In fact it can be written off, as was implied by former Federal Reserve Chairman, Alan Greenspan.

“The United States can pay any debt it has because we can always print money to do that. So there is zero probability of default.” ~Alan Greenspan

In other words, the money, ie., the debt, is meaningless, only having value if governments around the world use law and the violence of authority to enforce their citizens into payment of these fraudulent obligations, which is indeed happening the world over.

“I thought about the core tools we EHMs (economic hit men) used in my day: false economics that included distorted financial analyses, inflated projections, and rigged accounting books; secrecy, deception, threats, bribes, and extortion; false promises that we never intended to honor; and enslavement through debt and fear. These same tools are used today.” ~John Perkins, The New Confessions of an Economic Hit Man

After years of investigative research into the trillions of dollars missing from the U.S. government, former Wall Street banker and former Assistant Secretary of Housing and Federal Housing Commissioner at the United States Department of Housing and Urban Development in the first Bush Administration, Catherine Austin Fitts has come to the conclusion that global debt may very well be owned by off-planet entities who operate planet earth as a real estate investment.

“Is earth an open or closed economy? I went to business school, I worked on Wall Street for eleven years, you know I’ve been involved in the economy my whole life and the whole time I was invited to assume that earth was a closed economy. So, if we issued debt, then other humans owned that debt. If we issued stock, other humans owned that stock. But if you look at all the economic experiences I’ve had over my whole life, in government, businesses, everything else, what I will tell you is, you know, if you ask me to describe the economic model on planet earth, I would say, ‘well planet earth is a real estate investment trust because we’re paying a dividend some place every year, and I don’t know where it’s going. It’s going into that question mark, on the planetary balance sheet.” [Source]

While she admits that she herself does not have the answer to this rather serious question, the fact that each year a major portion of the world’s productivity evaporates into thin air, with no accountability whatsoever, does indeed beg this question to be asked by any serious economist. Even the government accounting agencies responsible for tracking and recording our expenditures can do nothing to answer the question. The money simply vanishes, the debt grows exponentially, and no one can explain who exactly the beneficiary is.

“Let me bring it down to some of the important questions you have to ask if you ask the question, ‘is this an open or closed economy.’ I got great statistics on who would issue debt, but for the life of me I couldn’t get great statistics on who owned it. I don’t know who owns it. I know they control. And they control through the debt because that’s how you control a company in invisible ways, by controlling through the debt. Who owns the debt? Is it humans, or is it somebody else?” ~Catherine Austin Fitts

We have a decent idea of who controls the world’s debt (the central banks, the IMF, and the private banking families), and we assume that these entities own this debt, but the cost to humanity is so great that something simply does not add up, unless the picture is broadened to include the possibility that earthlings are paying rent to other, as of yet undisclosed actors.

“Some people say that gold is the currency that will allow us to trade across planets, but for the life of me, I’ve spent many years trying to figure out what the gold inventory is on this planet, and I can’t do it. In 2011, somebody jammed the price of gold down, and then moved an unbelievable amount of inventory out of the single largest inventory in the overt economy for the GLD ETF.” ~Catherine Austin Fitts

It’s almost as if someone bought the moon, she points out, yet there is absolutely no agency on our planet that can explain astronomically huge transactions like these nor bring accountability to the billions of people who are being subjugated by a slavish debt-currency system.

So who owns our debt? It is a practical and key question, given the impact the carrying of such tremendous amounts of debt has on the human condition, and how easy it could be to free ourselves and future generations from such unreasonable, criminal bondage by simply adjusting a few digits on a computer screen. The fact that this option is not on the table in any discussion at any level is itself telling. 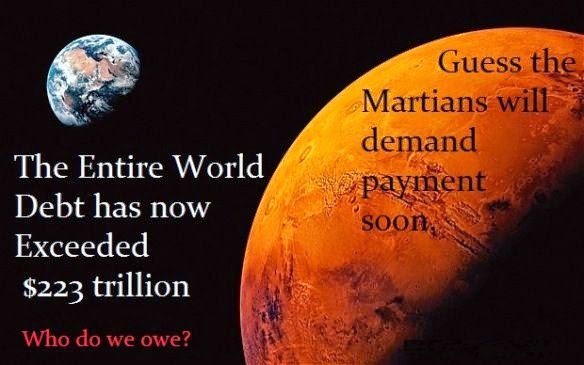 Lucas Dare is a staff writer for Waking Times, where evolution and revolution unite, and for Offgrid Outpost.