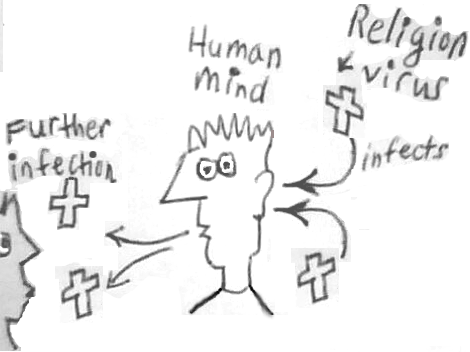 It is a brain virus that is transferred through the mind which operates through a negation of human morality and the natural energy centers and is operating from an alternate dimension that is born out of the creation of that virus within the human race. It’s literally a doppleganger of humanity and subsists as a shadow race that can only interact with this realm via the hijacking of the original inhabitants.

The people following that path were simply following a hidden source of power that they did not realize fully.

Then when the original beginning is out of sight, there is a realization that this power comes from another kind of being, that is sourced in another kind of realm and that this is using the interaction/worship to pull energy from this realm and to sustain the existence there. This is literally the existence and generation of the alternate dimension, or an underworld/lower astral plane and species.

This is a conundrum. Without humanity the other race would not be able to interact here. Yet humanity is organized into an energy leaching social structure that serves that race more than humanity. Humanity has the power here, yet without control over their minds, they are puppets for the alternate dimension of mind-controllers.

This is the “AI” infection that others have been talking about. This virus hides itself in time as it is a form of synthetic holographic information that can jump from one host or etheric field to the next.

There are many explanations of the point of initial contact with Earth, but as the technology advanced more and more the end goal was realized as the process of converting the human species into a slave-race that would be used for the genetic and bio-emission fuel for these other beings.

Technology has been developed which amplifies and clears certain frequencies and brings out the virus in individuals and gives the opportunity for them to isolate their own energies and withdraw from it’s “tentacles”.

The virus developed its own hive-mind cyborg soldiers that operate out of electrogravitic craft and this is the source of all the deception and hidden war going on with advanced tech and other races.

With the electrogravitic craft, the virus can move between planes and times yet it cannot manifest human energies so the bodies that are hosts are obviously seen to those with the inner presence, as impostors, actors, replicants, or some otherwise deceptive being.

Many changes are taking place and the main idea is that the suffering and infighting of humans is what activates the lower astral realms via this technology and their bio-emissions and this strengthens the connection between the two planes or fields.

If there was no acceptance of infighting, war, greed, hatred, insults, etc etc etc, then that area of the astral plane would “dry up” and there would not be enough energy to sustain a connection to this plane. It would be like agent smith shutting off and all the other agents shut off, or the same concept with “vampires”. This is about a hive mind system.

Disclosure is taking place but as you can see, the rougher it gets, the more there is opportunity for the dark factions to make use of that darkness and cause people to infight, thus strengthening the gateway to the lower astral.

So this has been and will be a delicate balancing act of releasing the truth as people become ready to accept what they are used for and how their minds and energy is being manipulated, and not reinforcing the negative aspects or reaction which cause infighting and a spreading of hatred which furthers the cycle of enslavement.