Prepare For Change
Home Ascension Canada Has Gone Where the US Fears to Tread – Monsanto’s Roundup...

Canada has gone where the FDA fears to tread, testing commonly consumed foods for glyphosate residues from Monsanto’s Roundup weedkiller – and the results are literally sickening.

The Canadian Food Inspection agency reports that glyphosate, the carcinogenic key ingredient in Monsanto’s Roundup, was found in 29.7 percent of 3,188 foods tested in the last two years.

Glyphosate was found in 47.4 percent of beans, peas and lentil products; 36.6 percent of grain products; and 31 percent of baby cereals, the agency report states.

HuffPost report: Only 1.3 percent of the total samples were found with glyphosate residue levels above what Canadian regulators allow, though 3.9 percent of grain products contained more of the weed killer than is permissible.

These legally allowable levels are referred to as Maximum Residue Limits (MRLs), and they vary from food to food and pesticide to pesticide, as well as from country to country. Regulators and agrichemical industry interests say as long as residue levels are lower than the established MRLs, consuming the pesticide residues is not harmful to humans.

But a growing number of scientists and medical professionals say such claims are false, particularly with pesticides like glyphosate, which is the most widely used agrichemical on the planet, commonly used in the production of dozens of food crops. 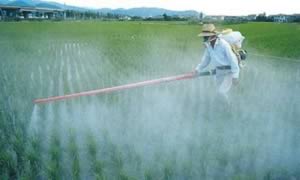 Glyphosate is sprayed directly onto crops like corn, soybeans, sugar beets and canola, all of which are genetically engineered to tolerate the pesticide. Monsanto has also encouraged farmers to spray the chemical directly on oats, wheat, peas, and lentils shortly before harvest to help dry them out.

A court case in California has forced the release of emails between Monsanto and the EPA, and the contents are sickening. We now have certifiable proof that Monsanto has always known Roundup causes cancer.

But even worse, we now have proof the EPA is a corrupt organization that is more interested in money than protecting the environment or the health of Americans.

This weedkiller isn’t just used on GMOs but on 70 different food crops in the U.S. – it’s in practically everything Americans eat. So, if glyphosate in Roundup is causing cancer and other diseases, I want to know about it and get it out of our food – don’t you?

Food Babe reports: Monsanto makes billions off of Roundup sales, so they don’t want anyone to question its safety. Some never-before-seen confidential documents just released in a court case against Monsanto give us a glimpse into how they are working to influence the EPA (who is in charge of determining whether they are allowed to sell Roundup anymore) and undermine any efforts to ban its use.

These documents show what many of us have known and suspected for quite some time… Monsanto is manipulating scientific research and has gotten some EPA officials on their side who seem to be helping them cover-up the health dangers of Roundup so they can keep it on the market.

Keep in mind… Monsanto and the EPA are both fighting to stop the public seeing these internal emails! Why do you think that is?

While Monsanto is being sued in California by dozens of people who claim Roundup caused their non-Hodgkin’s lymphoma, Monsanto had to provide over 6 million pages of internal emails and documents to the court and attorneys and marked the majority of them as “confidential” so they’d be hidden from the public.

When the plaintiffs asked the court to make the records public, both Monsanto and the EPA objected. The judge didn’t agree with their objections and threatened to sanction Monsanto if they continued trying to seal documents and found it in the best interest of the public to release them for all of us to see, “even if Monsanto doesn’t like what they say”.

The public interest group U.S. Right To Know is publishing these documents in their entirety on their website here.

This is just the beginning and more are coming out.

Here’s what we have uncovered in these documents so far.

They are feeding us lies and these secrets are poisoning us!

Most Americans are eating glyphosate every day… No matter how healthy we eat or how much we try to protect ourselves from it, this weedkiller is being used on most major conventional food crops and is so rampant in our environment that it is contaminating virtually all of our food.

Monsanto is stooping to corruption to continue selling their poisons. Everything from seeking to keep their correspondence with the EPA secret, to intimidating scientists at the WHO International Agency on Cancer (IARC) who found Roundup’s active ingredient glyphosate “probably carcinogenic”.

Glyphosate should be banned worldwide and consumers have the power to make this a reality.

I have an exciting announcement! The Detox Project just launched a new “Glyphosate Residue Free Certification” program and will begin labeling products that have been tested and are free of glyphosate. I’ve partnered up with them to help spread the word – They are working with food manufacturers and grocery chains, so that soon we will see labels like this on some products – send this link to your favorite companies and ask them to go glyphosate free.