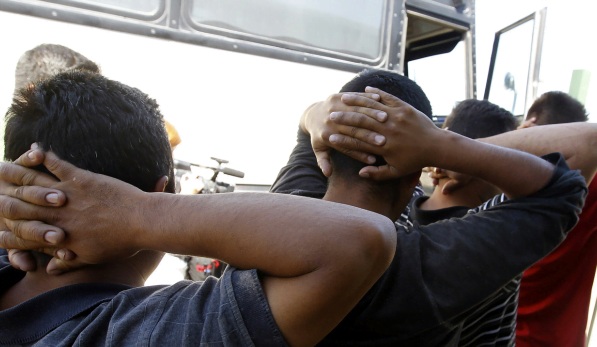 The Trump administration is advancing plans to create a national force of paramilitary guards and officials aimed at deporting millions of undocumented people from the United States. According to the Washington Post, the Department of Homeland Security (DHS) is planning on jailing tens of thousands more immigrants in the coming period, hiring thousands of agents, as well as the construction of a wall between the US and Mexico.

According to an internal DHS memo acquired by the Post, the government is expanding the number of detention beds by 33,000, including some for “unaccompanied minors,” in other words, children held in prison.

These facilities will include five private, for-profit prisons and two government facilities. The total number of immigrants imprisoned on a daily basis will rise to around 70,000—approaching the number of Japanese-Americans interned by the Roosevelt administration during World War II. 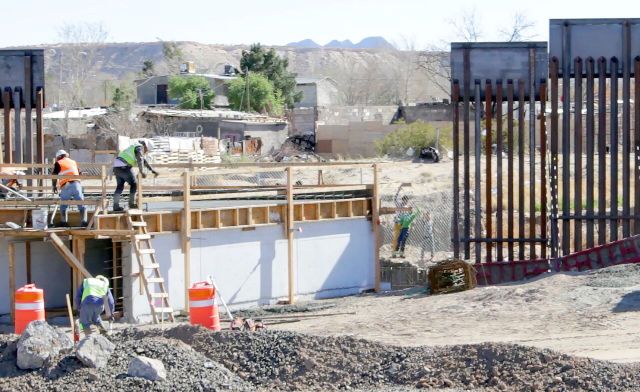 The memo also explains that “progress” has been made and that Customs and Border Protection (CBP) is “taking all appropriate action to immediately plan, design, and construct a physical wall” along the border. One contractor proposed to build a wall with a moat filled with nuclear waste that immigrants would fall into if they attempted to cross.

DHS is also dredging up the most backward and fascistic elements to hire 5,000 new guards and agents who will serve as modern-day slave catchers. The memo announces that the agency has eliminated the most basic physical and mental fitness requirements for applicants and has dropped the requirement that applicants must pass a polygraph test.

To combat widespread hostility to immigration raids, DHS will engage in propaganda to “further improve brand awareness and convey the importance and scope of our mission within the public sphere.” To do so, DHS is targeting young people: “We will also continue to focus on increasing our digital and social media presence to reach the millennial generation; [and] expand our outreach at high schools, colleges and universities.”

The new memo comes after DHS announced it has hired two fascistic white nationalists, John Feere of the Center for Immigration Studies (CIS) and Julie Kirchner of the Federation for American Immigration Reform (FAIR), to serve as policy advisers to ICE and CBP, respectfully. The fact that CIS and FAIR are now helping direct the government’s immigration policy is a warning of even more brutal treatment to come.

The New York Times reported yesterday that the Trump administration is also seeking to eliminate even the minimal requirements for services at immigrant detention centers. The administration is considering dropping translation services for immigrants, eliminating rules that detainee requests for medical attention be granted within 24 hours, and closing a bureau responsible for overseeing conditions for protecting immigrant women from sexual assault.

Immigrant detention centers are already hellish places, often located in isolated areas, where immigrants are fed rotten food, barred from seeing their attorneys, and housed with violent non-immigrant criminals. Many immigrants are housed in county jails. One Ohio police sheriff told the Times, “Jail is jail … we don’t put chocolates on the pillows.” 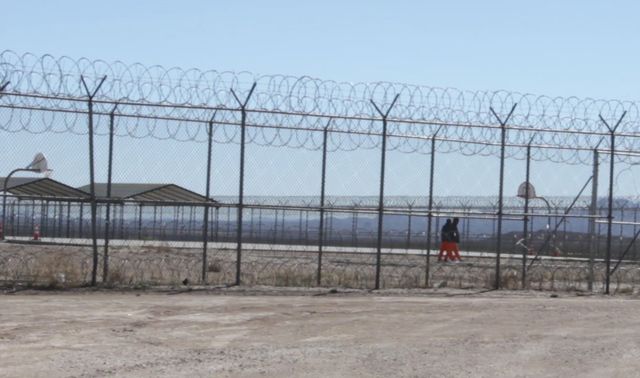 Private prisons house roughly 65 percent of detained immigrants, and this figure is likely to rise when the new expansion is carried out. The Democratic and Republican parties established a “detention bed quota” whereby the government is required to fill prisons with immigrants, producing windfall profits for privately-run facilities whose corporate executives donate heavily to both parties.

This massive expansion of the internment camp system for immigrant detention is taking place with the tacit approval of the Democratic Party, which has maintained an almost complete silence on Trump’s attack on immigrants in recent weeks. The Democratic Party has instead attacked Trump from the right, demanding that he prosecute the ruling class’s war drive against Russia in Syria while also threatening to attack North Korea.

Speaking at an event in Brooklyn, New York Wednesday, Democratic Senate Minority Leader Charles Schumer said that Trump’s immigration program is “terrible for America because these are people who work and you’re taking people’s breadwinners away, you’re taking people away who businesses need. That’s why they’re here. And so we’ll do everything we can to stop that.”

Aside from Schumer’s cynical declaration that he “defends” immigrants because corporations need to exploit cheap labor, his claim that Democrats will oppose Trump’s immigration programs is a lie.

Schumer and the vast majority of Democratic senators showered DHS, ICE, and CBP with money during last year’s appropriations bill, which “provides appropriation for … Border Security Fencing, Infrastructure, and Technology,” as well as “construction and facilities management.”

Democrats Schumer, Booker, Durbin, Feinstein, Franken, Gillibrand, Kaine, Klobuchar, Leahy, Reid, and many more agreed to pay the “salaries and expenses” of every immigration officer and border patrol agent. Each time an immigrant is deported, the Democratic Party has effectively signed their next check.

Widespread demonstrations have taken place against Trump’s immigration policies, and polls show large majorities oppose the construction of a border wall. Ninety percent of Americans support granting citizenship to immigrants who have lived in the US for several years. Last week, roughly 30,000 people demonstrated in Dallas, Texas to defend the rights of immigrants.

Democratic politicians spoke at the rally, including former Secretary of Housing and Urban Development Julian Castro, who as HUD Secretary sold 98 percent of long-delinquent mortgages to Wall Street speculators at sweetheart rates through the Distressed Asset Stabilization Program.

Democratic state legislator Roberto Alonzo told the crowd to vote for Democrats: “The 2006 march and the movement around that is what turned Dallas County blue in 2008. First we march, then we govern.”

Alonzo failed to mention that when the Democrats governed under Obama, they deported 2.7 million undocumented people and set the stage for Trump’s expanded deportation program. 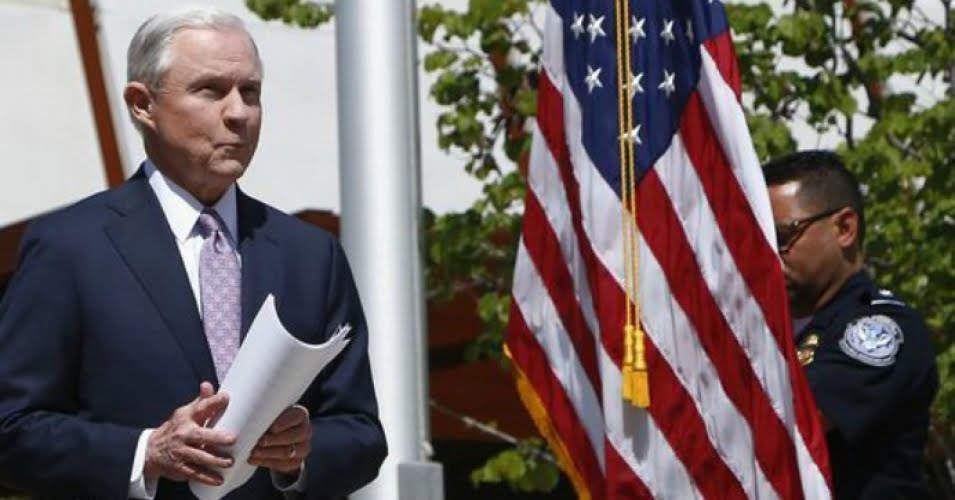 In “the Trump era,” as Attorney General Jeff Sessions called it on Tuesday, immigration officials will undertake a harsh crackdown on undocumented migrants—a campaign one veteran federal prosecutor described as “fucking horrifying.”

In his speech at a border port of entry in Nogales, Arizona, “[t]he nation’s top law enforcement official outlined a series of changes that he said mark the start of a new push to rid American cities and the border of what he described as ‘filth’ brought on by drug cartels and criminal organizations,” the Associated Press reported.

“This is a new era,” the immigration hardliner told Customs and Border Protection personnel. “This is the Trump era. The lawlessness, the abdication of the duty to enforce our immigration laws, and the catch-and-release practices of old are over.”

In his remarks, Sessions said nonviolent immigrants who enter the country illegally for a second time will no longer be charged with a misdemeanor—they’ll be charged with a felony. He also recommended that prosecutors charge “criminal aliens” with document fraud and aggravated identity theft, which carries a two-year minimum sentence. In January, President Donald Trump expanded the definition of which immigrants can be considered “criminal” to include anyone who has committed “a chargeable criminal offense,” which could include sneaking across the border.

As he proposed stiffer penalties for nonviolent immigrants, Sessions also targeted gangs and cartels “that turn cities and suburbs into war zones, that rape and kill innocent citizens and who profit by smuggling poison and other human beings across our borders.” Invoking unusually severe language in the written version of his announcement, Sessions proclaimed, “It is here, on this sliver of land, where we first take our stand against this filth.”

(Politico notes that the term “filth,” which appeared in prepared remarks, was omitted from Sessions’ speech when he gave it.)

One anonymous federal prosecutor told Daily Beast reporter Betsy Woodruff the directives were generating widespread negative response: “It’s fucking horrifying. It’s totally horrifying and we’re all terrified about it, and we don’t know what to do.”

“The things they want us to do are so horrifying—they want to do harboring cases of three or more people,” the prosecutor continued. “So if you’re illegal and you bring your family over, then you’re harboring your kid and your wife, and you can go to jail.”

“Attorney General Sessions is grandstanding at the border in an attempt to look tough and scare immigrants,” said Frank Sharry, executive director of the immigration reform advocacy group America’s Voice Education Fund. “It’s yet another example of the Trump administration treating all immigrants as threats and as criminals. This is the smokescreen they use to justify their efforts to deport millions, to keep people out of the country, and, ultimately, to try and remake the racial and ethnic composition of America.”

Gregory Z. Chen, director of government relations for the American Immigration Lawyers Association, added to the AP: “Once again, Attorney General Sessions is scaring the public by linking immigrants to criminals despite studies showing that immigrants commit crimes at lower rates than the native born.”

Jon Feere, a former legal policy analyst for the Center for Immigration Studies, or CIS, has been hired as an adviser to Thomas D. Homan, the acting director of Immigration and Customs Enforcement, according to Homeland Security spokesman David Lapan.

“These groups have spent 20 years looking for ways that they could hurt immigrants,” Lynn Tramonte, deputy director of pro-immigration advocacy group America’s Voice, told CNN, “and now they’ve been given the keys to the kingdom.”