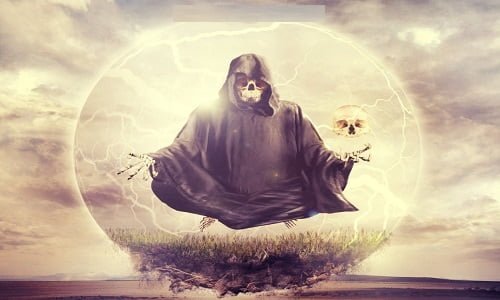 Death is a destination shared by all living things. People view death with fear, as means of escape from worldly suffering, or a natural process of replacing the old with new, based on their own way of thinking. Different religions and cultures view spiritual enlightenment in different lights, but the basic meaning remains that being enlightened is having full comprehension of our purpose of life which ends with death.

According to the author of ‘On Death and Dying’ Elizabeth Kubler Ross, death is nothing but a peaceful cessation of the functioning of the body. A spiritually enlightened person does not fear death but views in different ways based on philosophy of his/her life.

Awareness of death helps people perceive the eventual futility of worldly bonds, relationships, pleasures and wealth. The followers of Buddha are often encouraged to meditate on death, as it helps them to understand the impermanence of life which helps them from falling victims to worldly pleasures and greed. People who fear death often try to hide from it by immersing themselves in superficial happiness. When we understand the inevitability of death, we can focus more on spiritual enlightenment and self actualization as we know that death can strike any moment and the time we have on hand counts.

Epicurus stated, “Death is nothing to us, since when we are, death has not come, and when death has come, we are not.” There is no meaning in spending our lives in fear of death, because we as people do not feel the pain of death. We cease to exist, so does our pain and suffering. A person can live a life of satiation and tranquility when his mind is free from the fear of death. Spiritually enlightened people strive to overcome the fear of death and perceive it as an end of pain and suffering.

We end every day with a peaceful sleep in the night, so do we end our lives with a longer sleep known as death. With wisdom comes the enlightenment that, like a person who spends the day fruitfully sleeps peacefully in the night, so does a life well spent life brings peaceful unperturbed death. Ceasing of senses happens to us every time we go sleep; death is nothing much different than this other, than we do not wake from the next morning.

According to the philosophy of life after death; our present life is nothing but a preparation for the permanent afterlife. The followers of many religions believe in life after death in next realm. They consider death to be a passage which leads them to be one with their creator, in other words death means being unified with God. The acceptance of life after death has enabled the believers to accept that God is ultimately just and whatever injustice happens on earth has a reason. The life after death philosophy helps people to overcome the grief, fear and fatality of death.

2. Death is not an end but a new beginning:

People, who believe in rebirth and reincarnation of souls, do not consider death a calamity or end, but a new beginning through rebirth. Followers of Hinduism believe that man creates his own destiny on earth, as his actions are responsible for how he will be reborn. People often try to attain freedom from this cycle of birth and rebirth by attaining Moksha. Therefore death is not viewed as a calamity but freedom from the suffering of a vicious cycle. On the other birth is viewed as continuing of the suffering, but an opportunity to earn Moksha.

1. Death is certainty of life:

Death is a proof that no matter how much we progress, as mortals we are ultimately helpless and vulnerable when the end comes. Spiritually enlightened people hold death as a mirror that helps them to accept other facets of life that cannot be controlled. In the fast changing world, the spiritually enlightened people see death as an unchanging certainty and constant factor of the universe. People, who fear and try to hide from death, will ultimately, fail in living their life to the fullest, whereas death will make its appearance when it has to.