‘No matter how many times the U.S. bombs us, no one bats an eye.’ These are the words of just one of millions of Iraqis who have died needlessly in America’s ongoing ‘War on Terror.’ The country’s endless war has figuratively and literally destroyed the lives of countless non-combatants.

WASHINGTON, D.C.– In the Iraqi city of Mosul, local residents have retrieved almost 300 bodies from underneath buildings that were leveled by a U.S. airstrike that took place on March 17. The strike killed hundreds as part of an attempt by a U.S.-led coalition to combat Daesh (ISIS) forces by bombing their network of tunnels.

Lt. Gen. Stephen J. Townsend, a senior U.S. commander in Iraq, admitted to The New York Times that, as of now, ”the initial assessment is that we probably had a role in these casualties.” In an interview with The Los Angeles Times, U.S. Brig. General Rick Uribe, who is reportedly in charge of approving strikes across parts of Iraq, argued that they’re “very careful” about how much “collateral damage” such strikes might cause.

But after being trapped for days beneath the rubble, many Iraqis caught in the fray of the latest U.S. airstrike in the country are fighting injury, sickness, and trauma. Ali Thanoon, who was trapped beneath debris for five days, had his house bombed.

Another Iraqi told a harrowing tale of pulling his daughter out from beneath concrete, and then seeing the corpse of his wife – her head no longer visible, and only her arms and torso intact. “We didn’t see any Daesh die – only civilians,” another resident, a local photographer, alleged.

The euphemism “collateral damage” is often used to describe a symptom of military actions undertaken by what some describe as a “bumbling empire.” Deaths caused by intentional warfare are usually characterized as “mistakes.” Recently, 126 people were killed after a bus convoy that was carrying Muslim Shiite evacuees was bombed in the Syrian city of Aleppo. CNN reporter Nick Walsh described the horrific event as “a hiccup” that could be blamed on so-called “moderate rebels.”

A crisis of conscience Residents carry the body of several civilians killed in a US airstrike in Mosul, Iraq on March 24, 2017. (AP/Felipe Dana)

In “Techniques of Propaganda and Persuasion,” author Magedah Shabo explains that the loss of civilian lives during wartime may provoke a crisis of conscience, which can be a serious problem for belligerent forces, especially from a public relations standpoint. “If the loss of twenty soldiers can provoke a crisis of conscience for people, it is equally probable that the loss of a hundred innocent civilians could provoke unrest,” she writes.

The dehumanization of foreign casualties is another element contributing to the normalization of civilian deaths.  According to a report from Physicians For Social Responsibility (PSR), a U.S.-based medical and public health organization, the U.S. military killed 1.9 million Iraqis from 1991 to 2003. From 2003 to date, one million more were killed by U.S.-led military intervention.

Since 1990, helped in part by sanctions and military interventionism, the PSR study found that 4 million Muslims have been killed in countries ranging from Iraq to Pakistan. The deaths in Iraq alone, while mobilizing anti-war activists, were not enough to spur enough people into action.

This was arguably thanks in part to the global “war on terror,” which had the Bush administration, the British government and other Western allies describing civilians as “collateral damage” and all armed factions fighting the U.S.-led occupation as barbarians, thereby denying any semblance of humanity to the Iraqis.

Death and dollar signs — the monetization of Islamophobia This dehumanization of the millions of victims of the “war on terror” was aided in part by what could be described as an “Islamophobia industry” worth millions of dollars that used the media to regurgitate political talking points instead of challenging them.

Yasmine Taeb, co-author of the report Fear, Inc. 2.0: The Islamophobia Network’s Efforts to Manufacture Hate in America, explains that since George W. Bush launched the “war on terror” in 2001, over $57 million has been contributed by eight wealthy donors to anti-Muslim and anti-Islam organizations.

According to the Council on American-Islamic Relations (CAIR), 37 U.S.-based anti-Islam groups enjoyed combined revenues of $119 million from 2008 to 2011, adding that the groups are linked to key players in a network that benefited from large sums of money as they encouraged the American public to fear Islam.

This would eventually direct media sentiment to demonize Muslims, the religion of Islam and Arabs altogether to justify wars abroad.

Government propaganda – which, historically, has been echoed unquestionably by the press during times of war – has always featured a menacing, inherently sadistic and formidable adversary for the public to fear. The dissemination of such propaganda has been part and parcel of most war efforts – in order to defeat an enemy, one must first convince the world that this enemy is not human, thereby easily turning civilians into faceless entities that do not deserve the most fundamental human rights.

This kind of war marketing is currently seen in the way that Muslims and foreign people of color are often described; they exist as “hordes,” they “flood” Western communities and they’re often accused of being double agents, working to undermine the respective states they occupy. Language that characterizes entire communities as “unpeople” has been thoroughly normalized.

Musa S., an engineering student with family in the Iraqi city of Najaf, said Iraqis have watched the world become desensitized to their plight. “No matter how many times the U.S. bombs us, no one bats an eye.”

“During the height of occupation of Iraq by the U.S. and its allies, you’d see stories of families being executed, women and young girls being raped and tortured to death, and no matter how depraved the crimes, so long as the perpetrator wasn’t an Iraqi, the victims didn’t matter,” Musa said.

“We aren’t people, and we aren’t animals. It’s like we exist in another dimension [to most Americans]. When we die after one of their airstrikes, it doesn’t move them into having any kind of emotional reaction. On the contrary, they look for any way to excuse the carnage. Their government is a kind of god-like being that only opens up the gates of hell to people who deserve to feel the flames,” Musa said.

Musa also mentions the story of Abeer Qasim Hamza al-Jabani, a girl who was raped and fatally shot in the head before her corpse was set ablaze. It was found that the 14-year-old girl had been assaulted by four U.S. soldiers, who also killed her entire family.

One of the convicted soldiers, Steven Dale Green, would later admit that he didn’t see Iraqis as human beings. In an interview with NBC News, Green said that soldiers would routinely call Iraqis derogatory names and that he couldn’t begin to describe how much he hated them. “I wasn’t thinking these people were humans.” A screenshot from Fox News featuring the network’s coverage on President Trump’s use of the ‘MOAB’ in Afghanistan.

Eisa Ali, a journalist who has covered the war in Iraq for The Sunday Times, said the issue of civilian casualties “is bigger than just the U.S. regime and its double standards.” Ali, who currently works for Russia Today’s UK branch, argues that a larger concern is the degree to which the aforementioned double standard is enabled “by a so-called free and liberal media which harangues the current U. S. president on every topic except foreign policy.”

Along with the airstrikes targeting Mosul, the U.S. bombed alleged Daesh positions in Afghanistan, an attack that was later described by former Afghan President Hamid Karzai as being “an immense atrocity against the Afghan people.”

Ali contends that there continues to be a clear-cut discrepancy in the way that the media covers U.S. foreign policy compared to other countries, thereby allowing the U.S. government to continue unchallenged in its militarism. “Were it not for journalists at independent outlets and on social media, there would be even less coverage of civilians casualties of U.S. strikes than there currently is,” he said.

“There is no moral equivalency between the United States of America, the greatest freedom-loving nation in the history of the world, and the murderous thugs that are in Putin’s defense of his cronyism.” These were the words of GOP Senator Ben Sasse of Nebraska during an interview with ABC’s George Stephanopoulos. 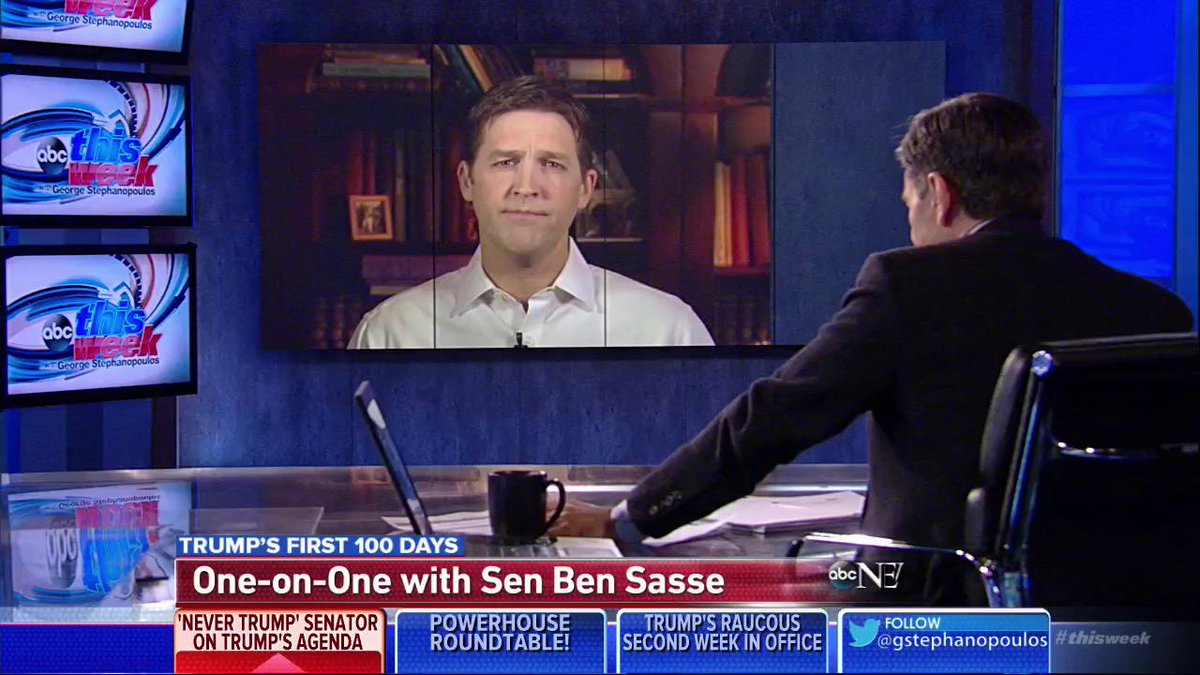 .@SenSasse to @GStephanopoulos: “There is no moral equivalency” between US and Putin’s “murderous thugs” http://abcn.ws/2kC4uza  #ThisWeek

The contention that the U.S. is uniquely good is one that goes back to, at the very least, Manifest Destiny – the 19th-century doctrine that was used to justify imperialist expansion and governance across North America. Settlers argued that the United States was destined, by God, to expand its territories and that they should rule over such territories.

Arguably, the power of Manifest Destiny’s religious, nationalist sloganeering was compounded by the accompanying dehumanization of not only indigenous tribes, but all non-whites, including Mexicans, who were referred to as “a mongrel race,” according to Edward J. Escobar, Associate Professor in the Departments of Chicana and Chicano Studies and History at Arizona State University.

The language politicians use today continues to evoke similar depictions of marginalized communities, especially those who reside in countries that are made to face the consequences of the global “war on terror.” The deaths of countless civilians abroad will continue while, as Musa S. put it, “no one bats an eye.”