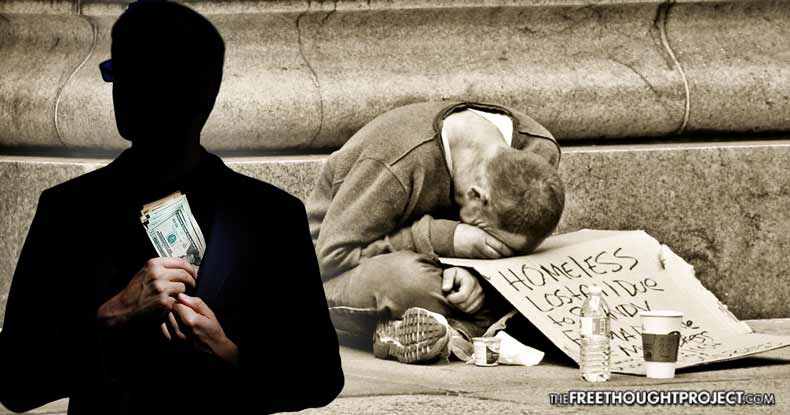 Another jaw-dropping report was released this week that draws attention to the staggering wealth of just a small handful of people as compared to everyone else. America’s richest one percent now own more wealth than the poorest 90 percent of the entire country—combined. Indeed, according to the most recent data by economist Edward N. Wolff, this very elite group of people owns nearly half of the entire country’s wealth.

The paper, written by economist Edward N. Wolff, used data from the federal Survey of Consumer Finances. The data showed that the wealth owned by the one percent shot up by nearly three percentage points since 2013, from 36.7 percent to 39.6 percent. That number represents the most wealth owned by the one-percenters in over five decades.

As the rich got richer, the poor got poorer as the data shows the wealth of the poorest 90 percent has decreased. As a result, the top one percent of households now own more than the bottom 90 percent combined.

To put this disparity of wealth in perspective, Wolff notes that the mean net worth of the top one percent is roughly $26.4 million while the mean net wealth of the poorest 90 percent is actually negative at -$8,900.

“The percentage increase in net worth from 1983 to 2016 was much greater for the top wealth groups than for those lower in the distribution… all in all, the greatest gains in wealth were enjoyed by the upper 20 percent, particularly the top 0.1 [percent],” Wolff wrote in the paper.

Wolff’s data is not an anomaly. As TFTP previously reported, just 20 people own more wealth than half of the entire country combined.

The report, titled Billionaire Bonanza: The Forbes 400 and the Rest of Us, “exposes the extreme wealth concentrated within the fortunes of the 400 wealthiest Americans and compares this wealth to the much more meager assets of several different segments of American society.”

Chuck Collins and Josh Hoxie, the authors of the report, described a compelling picture about the top 20 of those 400 people.

America’s 20 wealthiest people — a group that could fit comfortably in one single Gulfstream G650 luxury jet –­ now own more wealth than the bottom half of the American population combined.

Let that sink in. A group of people that could stand in your living room owns more wealth the 160,000,000 other Americans.

So why is that?

Of course, becoming rich is no reason for alarm. Many people work very hard to save money and acquire wealth. This is the beauty of the free market. However, it is how these few people gain such vast amounts of wealth, that is cause for concern.

The ruling elite in the United States quite literally hand-pick politicians and pay for their campaigns to put them in office. More than half of all donations provided to the 2016 presidential candidates in the year 2015, in both parties, proves this notion as they came from a mere 158 families.

The 158 families, who’ve donated billions of dollars to these candidates, have entirely different reasons for choosing their politicians versus Joe Sixpack. Consequently, it is for this reason that Joe Sixpack’s requests are completely ignored by the next puppet to be placed in office who claims to represent him.

While you’re told by the Sean Hannitys of the world that the government takes from the rich to redistribute to the poor, on the grand scheme, the reality is actually the opposite. The state fleeces the poor and middle class in America, and that money is, in turn, redistributed to the most wealthy Americans.

As Pulitzer Prize-winning reporter, David Cay Johnson points out, the results of such a government system are,

“policies that take from the many and redistribute to the already rich few through stealth techniques that rarely make the news but can be found in the public record. Among these policies are a failure to enforce the laws of business competition, severe restrictions on unions and subsidies galore for big companies.”

When the topic of the ultra-rich controlling elite is brought up, most of the time the free market gets the blame. But most of these opinions fail to take the role of the state into consideration.

“Such massive inequality reflects not market economics but political influence that tilts the economic playing field,” explains Johnson. “And because of their political influence, those at the very top get tax favors, especially the deferral of taxes into the distant future, which transforms the burden of taxes into a bonanza of increased profits.”

The reason that nothing ever seems to get accomplished in Washington D.C. is due to the hard truth that your elected officials have no loyalty to you.

As we’ve seen from nearly every political candidate in the last century, including Trump, the “promises” made on their campaign trails are but fleeting memories once they get into office. After all, how can a politician keep true to their campaign promises when they are busy creating and passing into law, loopholes, and subsidies for the very small group of people who put them in power?

David Brunori, a Forbes contributor, noted three years ago concerning a report titled, “Subsidizing the Corporate One Percent,” that “three-quarters of all state economic development subsidies went to just 965 corporations since the beginning of the study in 1976. The Fortune 500 corporations alone accounted for more than 16,000 subsidy awards, worth $63 billion – mostly in the form of tax breaks.

“Think about that. The largest, wealthiest, most powerful organizations in the world are on the public dole. Where is the outrage? Back when I was young, people went into a frenzy at the thought of some unemployed person using food stamps to buy liquor or cigarettes. Ronald Reagan famously campaigned against welfare queens. The right has always been obsessed with moochers. But Boeing receives $13 billion in government handouts and everyone yawns, when conservatives should be grabbing their pitchforks.”

Grossly inflated subsidies are provided to the oil and gas industry, the pharmaceutical industry, and the agriculture industry, or Big Ag. Corporations garner tax subsidies from state and local governments. And the biggest corporations fund lobbyists — and win hundreds of billions in federal contracts.

And those are only a few of the ways corporations and executives game the system to amass huge fortunes.

The fleecing is actually getting worse too. Politicians have become so addicted to stealing the product of your labor, that they have created a virtual black hole of debt that is impossible to ever pay back. It is a mathematical certainty that this unsustainable system of fascism and theft will come crashing to the ground.

The US government has become a snake – eating its own tail.

Johnson lays out this situation quite clearly as he expands on the analogy put forward by Collins and Hoxie,

So think about that image — a top-of-the-line Gulfstream G650 jet and 160 million Americans, each with the same net worth. Now imagine a much smaller jet, with 12 or so oligarchs, and ask yourself just why you are paying taxes to enhance their fortunes instead of your nest egg.

Unfortunately, the only solutions proposed by those within the system to offset the ruling elite and their fleecing of the citizens is, ironically, more legislation — because it’s worked so well in the past, right?

Attempting to change the system by using the criminals within the system is akin to asking a mugger to stop mugging you.

The good news is that people are beginning to understand this exercise in futility and they are creating and operating systems that exist outside of the state-controlled monopoly. Bitcoin is an excellent example.

As the thinkers in the world build new systems to act outside of the old ones designed to rob them, the government is constantly vying to shut them down. However, ingenuity and free enterprise—which the government lacks almost entirely—always wins, even though it may get worse before it gets better.