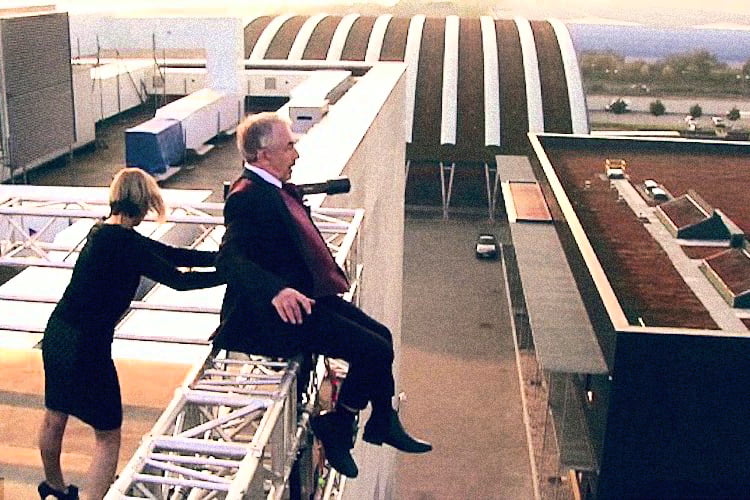 In his 1974 book, Obedience to Authority: An Experimental View, Yale University psychologist Stanley Milgramdiscusses in detail the findings of his now famous experiment. Milgram demonstrated just how easy it is to convince an ordinary person to commit torture and murder under the instruction of an authority figure.

Intrigued by the role of Nazi military personnel in concentration camps during WWII, Milgram wanted to know how much coercion people needed in order to willingly inflict harm on another person.

“He asked volunteers to deliver an electric shock to a stranger. Unbeknownst to the volunteers, there was no shock—and the people they were shocking were actors pretending to be terribly hurt, even feigning heart attacks. Milgram found that most people would keep delivering the shocks when ordered by a person in a lab coat, even when they believed that person was gravely injured. Only a tiny percentage of people refused.” [Source]

The suggested conclusion is that people are inherently unable to think for themselves when given a subordinate role in some authoritarian hierarchy, such as the role of the ordinary citizen in a state-controlled world. A documentary of this experiment can be seen here.

The Milgram study was controversial in that some felt the results were skewed in favor of a predetermined bias. In the fifty-plus years since the experiment, there have been no other major research studies to confirm Milgram’s findings. Nevertheless, the presumption that normal people will go as far as to commit murder if they are relieved of responsibility by an authority figure feels inherently truthful in a world of so many organized atrocities.

“Can we be manipulated through social pressure to commit murder?” ~Derren Brown

It’s an important question at a time when the converging technologies of AI and social media are affecting individual and group psychology in not yet understood ways. British illusionist Derren Brown recently conducted a similar experiment, this time in a feature documentary for Netflix entitled, The Push.

“This show is about how readily we hand over authorship of our lives, everyday, and the dangers of losing that control,” says Brown, who organized the reality TV-like experiment in which ordinary people were duped into doing things most of us would never even consider.

At the heart of the experiment lies the powerful effects of social pressure and social compliance, along with the individual’s inherent need to belong and fit into society. It also questions the nature of individuality, while demonstrating that many of us simply don’t have the courage to assert our own moral courage when faced with even a slight amount of authoritarian pressure.

The Push begins with a phony police officer calling a cafe worker on the phone and in a quick minute, without even a face-to-face interaction, convinces this person to steal a woman’s baby. Interestingly, the worker carries out the abduction even while expressing significant hesitance.

The main experiment picks up from there, involving unwitting subjects who are gradually convinced of the need to push another person off of a high-rise building. It’s an elaborate setup, which builds upon one small act of compliance after another until the subject is put into a situation where they are encouraged to kill a man they just met.

It’s a rather theatrical and unscientific presentation, but the results are noteworthy as three out of four participants actually shove an actor off of a building, believing they are committing murder, after being pressured into it by a small group of others. It’s a shocking act of compliance and subservience to the pressures of a peer group and a persistent authority figure.

What we don’t know about society today, though, is just how many people are this extremely socially compliant, capable of doing anything to appease the directives of others. As Brown notes, “the more socially compliant a person is, the more likely they are to look to others for signs on how to behave. And the more people, the greater the pressure to join in.”

This says a great deal about humans. Are we somehow wired to abandon our own morals and sense of self-integrity for the false belief that fitting into a group is necessary for survival?

A trailer for this show is seen below.

This article (Experiment Demonstrates the Deadly Power of Social Compliance) was originally created and published by Waking Times and is published here under a Creative Commons license with attribution to DylanCharles and WakingTimes.com. It may be re-posted freely with proper attribution, author bio, and this copyright statement.