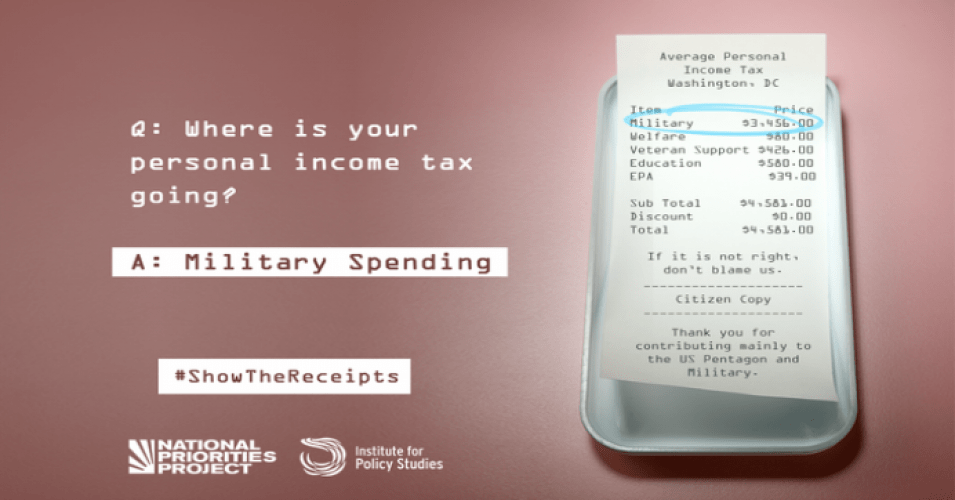 “Congress appropriates more for U.S. military spending than the next eight countries combined, but year after year refuses to adequately invest in access to quality education and healthcare for millions of Americans.”

As Americans rushed to pay their taxes on Tuesday before the official deadline, peace groups reminded the public of the uncomfortable fact that an “astronomical amount” of the money sent to the IRS each year goes not to funding education or a single-payer healthcare system the U.S. supposedly can’t afford, but straight into the bloated coffers of the Pentagon.

“Congress appropriates more for U.S. military spending than the next eight countries combined, but year after year refuses to adequately invest in access to quality education and healthcare for millions of Americans, infrastructure spending, and alternative energy,”  Paul Kawika Martin, senior director for policy and political affairs at Peace Action, said in a statement late Monday.

“As a result, arms industry executives make out like bandits while programs that provide essential services for most Americans remain drastically underfunded, as do development and diplomacy programs that help end wars and prevent them in the first place,” Martin added.

“It’s devastating to know who paid for it: we did,” Koshgarian observed.

“The average taxpayer contributed $3,456 to the military in 2017,” she noted, compared to $80 that went to welfare programs and “just $39 to the Environmental Protection Agency.”

In an analysis published last month, National Priorities estimated that 23.8 cents of every dollar in taxes paid in 2017 went to Pentagon and military spending.

“Meanwhile, 11 cents goes to military contractors, including 1.7 cents for the Pentagon’s biggest contractor and maker of the F-35 jet fighter, Lockheed Martin,” the group found.

Writing for Truthout on Tuesday, Koshgarian pointed out that the political choice to devote such massive sums of taxpayer money to the Pentagon and corporate war profiteers has very “real consequences.”

If Trump and Republican lawmakers have their way, Americans could soon be dumping even more tax money into the American war machine while healthcare, food stamps, education, and other public programs are slashed.

As Common Dreams reported last month, Trump signed an omnibus spending bill that contained $700 billion in Pentagon funding, and he has asked for an even bigger military budget for next year. 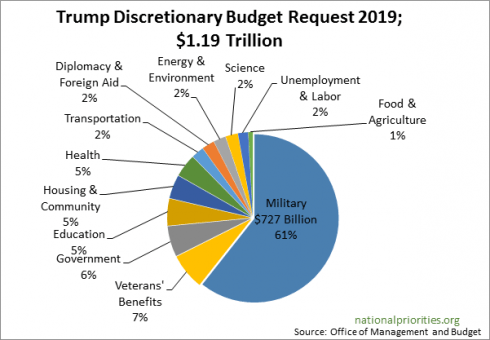