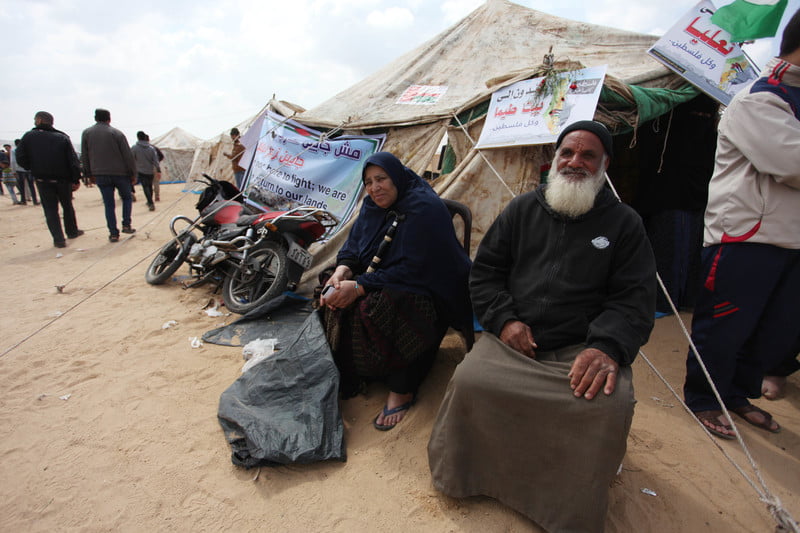 Much has already been written and said about the bloody events of the first Great March of Return protest on 30 March.

Some of it will be forgotten in the bloodshed of the second march, on 6 April, which predictably saw Israel respond in the same brutal manner to popular unarmed demonstrations that it simply won’t countenance.

Indeed, the date of the first protest coincided with the commemoration of Land Day, when Palestinians protesting land confiscation inside Israel in 1976 were also subjected to lethal crowd control tactics and six unarmed demonstrators were shot and killed.

On 30 March 2018 the result was even more bloody. Fourteen protesters died on the day, and others succumbed to their injuries over the following week, bringing the total fatalities to 17.

Human Rights Watch found no evidence of any credible threat to Israeli soldiers, operating under a shoot-to-kill policy, posed by demonstrators.

After nine were killed during protests on 6 April, including a journalist, and another protester was shot dead earlier in the week, the total number Great March of Return fatalities has reached 27. Nearly 2,000 Palestinians have been injured – more than half of them by live fire – since the launch of the protests.

The Great March of Return demonstrations – which are set to run until 15 May, when Palestinians commemorate the anniversary of the 1948 ethnic cleansing of Palestine – have been called to restate demands for the right of return of refugees.

The right of return is an issue that, if it is broached at all, only receives the most cursory of attention from non-Palestinians and in the foreign and Israeli media and then only to be brushed aside.

And yet, it is an issue that lies at the very heart of the Palestine question.

A right to pass down the generations

It was this that motivated Halima Aqel, 76, to come to one of the gatherings of protesters on 30 March.

She had brought her seven granddaughters to an area on the eastern edge of the Zaytoun neighborhood, on the edge of Gaza City and in between the Nahal Oz and Karni commercial crossings – both long underutilized because of Israel’s 10-year-old blockade on Gaza – and not 900 meters from the barbed wire fence and concrete wall Israel has erected around the impoverished coastal strip of land.

“I still dream of returning to my village,” said Aqel, after taking a selfie with her granddaughters.

Aqel was six when she and her family had to leave the village of Burayr, and, like so many of her generation, she still carries the key to the family home, a key her father passed to her when he died and that she will pass to one of her sons.

“My participation today is to express this hope of return. And if I am not of the generation who will return, I’m here to instill the necessity of returning in my granddaughters’ minds and hearts,” she said. “They can complete the journey after us.”

It is 70 years now since the Nakba or catastrophe in 1948, when more than 750,000 Palestinians fled or were forced to flee their homes and lands in what was to become Israel.

They were never allowed to return to reclaim their possessions or properties which were instead either confiscated by the new state and doled out to Jewish-only arrivals, or, as in the case of some 500 villages, destroyed and left to disappear.

A little further toward the boundary with Israel, in the Malaka area, now just some 700 meters from the edge of Gaza, 22 tents had been erected, each carrying the name of a village or town those inside had left in 1948.

One of these was filled with members of the Labad family and bore the name Ashkelon, an ancient city, now one Israel’s main cities in the south, where al-Majadal Asqalan was once home to more than 10,000 Palestinians.

A note to the world

Ismail Labad, 58, told The Electronic Intifada that the tents were erected in an attempt to raise awareness internationally and “guarantee that out right of return is recognized by the international community.”

Labad, a clothes merchant, was speaking while preparing lunch with a dozen members of his family in front of the white tent that bore the name of the place they think of as home and next to which one of his children, Ibrahim, 12, was busy raising the Palestinian flag.

Hundreds of similar tents were erected from south to north in Gaza, both on 30 March and 6 April, and thousands of men, women and children took part. The crowds were not deterred by the violent response to the first protest and turned out again in their thousands for the second week.

They will turn out for the third too. The protest represents a sense of unity among Palestinians around a core cause that supersedes factional differences. Demonstrators held the Palestinian flag aloft, not their factional colors.

Organizers say the series of protests is an attempt at reminding the world of its responsibilities to Palestinian refugees, whose right of return is not only mandated by UN General Assembly Resolution 194, but in Article 13of the Universal Declaration of Human Rights.

“The mass return march is a message from Palestinians to the world to reconsider our cause,” Yahya Sinwar, the head of Hamas in Gaza, told journalists at the start of the protest on 30 March.

“The activities of the march will not stop until we’re back to our lands occupied by Israel 70 years ago.”

Hamza Abu Eltarabesh is a journalist from Gaza.