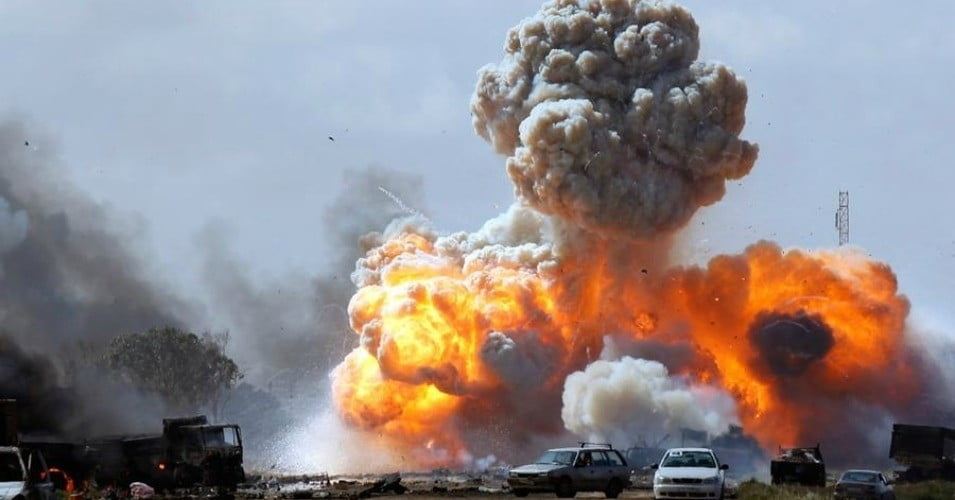 Despite the uncertain results and colossal failures, we remain addicted to strike warfare, telling ourselves that we can police the politics on the ground by dropping bombs from on high.

“Surrounded by the wreckage around the world wrought by strike wars stretching back over half a century, you’d think that it’s time for us to get into the rehab center and confront our addiction.” (Photo: Reuters)

You could hear the back slapping in Paris, Washington, and London as the allies unleashed a fusillade of missiles at Syria in response to the April 7 chemical attack in the suburb of Douma. The “precision” strikes are said to have crippled the Assad regime’s chemical weapons capability—the same weapons that were supposed to have been voluntarily given up way back in 2013 in that now infamous deal between the Obama administration and Vladimir Putin.

News outlets have all posted the videos of missiles blowing up buildings with big booms, with accompanying pictures of the bombers and ships that launched the fusillade. Wow, I mean, aren’t we great? It’s got to be worth a chest pumping photo op, right?

For those states that can afford them, standoff weapons and bombs have become the preferred method of policing the international system. It’s hard to remember any of these strikes having any sort of lasting impact once the headlines and videos have faded, yet these strikes maintain a hold on governments’ and popular imaginations as some sort of “decisive” action that curiously demonstrates strength, commitment, and resolve.

Before we get too giddy and engage in too many self-congratulatory hand-shakes, we should take a long, hard look in the mirror and ask ourselves “what has actually been accomplished?” How are we actually to judge what objectives have been achieved, and how are we to know that we’ve actually achieved them?

The reality is that strike warfare—long range strikes by planes and missiles—has rarely achieved its advertised strategic consequence. Yet it remains a dangerous, drug-like chimera to states desperately searching for some sort of easy, low-cost fix in the search for influence in the chaotic international system. Like all drugs, the initial rush feels great, but the long-range addiction is, in the end, far more destructive, dangerous, and difficult (if not impossible) to kick.

We tell ourselves that the state/bad guy on the receiving end (in this case Syrian leader Bashar al-Assad) must have felt some sort of proportionate pain in response to what has become the routine use of chemical weapons in the Syrian civil war—some estimates suggest they’ve been used more than 50 times over the course of the war. The truth is that we have no way of knowing whether the weapons have been destroyed or whether Assad will keep on using them.

We told ourselves the same thing in December 1998, in the three-day fusillade known as Desert Fox, when we really emphasized just how unhappy we were with Saddam’s recalcitrance toward UN weapons inspectors. And, of course, Desert Fox was really just the exclamation point on repeated long-range strikes during the 1990s that sought to control his non-existent WMD programs. My favorite strike of the 1990s was the 1996 cruise missile strike to warn Saddam off of attacking the Kurds in northern Iraq. The strategic consequences of those strikes went unrecognized at the time, but they had little to do with Saddam. Following the strikes, the US took on the role of protecting the Kurds and tacitly endorsing their dream of statehood—a decision that today continues to shape the region in ways that may or may not support our interests. In the end, the era of the 1990s culminating in Desert Fox proved to be little else but the bridge to the next phase of the U.S. war on Iraq.

We told ourselves the same thing in the opening phases of the shock and awe campaign of the invasion of Iraq in 2003 as we blasted away in our creative targeting against Saddam’s armies under the rubric of “shock and awe” and “effects-based operations.” Sure enough, Saddam’s armies indeed melted away from our initial fusillade and our advancing armies, only to regroup and morph into something much more dangerous and deadly that is still shaping the landscape of the Middle East.

We told ourselves that same thing in Afghanistan, as we unleashed a fusillade of strikes called in by CIA jawbreaker teams that sent the Taliban scurrying over the border into Pakistan to rest and refit. Once they had done that, they slipped back across the border to resume the war—a war that remains unsettled 17 years later. The Taliban has not laid down their arms and shows no interest in reaching a peace agreement.

We told ourselves the same thing in Libya in 2011, when we believed that a few well-placed strikes would enable a peaceful transition of power from Qadafi to something more amenable to, well, us. Of course, as was the case in Iraq, the strikes were only the opening round in an ongoing struggle for political power and authority all these many years later.  As was the case in Iraq and Afghanistan, the second order effects of the strikes in Libya ended up being of far greater strategic consequences than was anticipated at the time.

Our regional friends have perhaps unsurprisingly also drunk the Kool-Aid. The Saudis and the Emiratis have been blasting away from on high against the Houthis in Yemen for three years and, in the process, have helped create the worst humanitarian catastrophe in world. And that’s saying something given the implosion of states and the resulting refugee populations created in places like the Sudan and the Congo.

We’ve told ourselves the same thing in the global war on terror, where we have sent our robots and special forces hunting for sought-after “high value targets” all over the Middle East, Africa, and South Asia. We have surely rained death and destruction on these enemies (and killed lots of innocent people who were at the wrong place at the wrong time) with our Hellfire missiles, but have we won the war?

We told ourselves a version of the same thing as we unleashed our strike war against North Vietnam in the 1960s and 1970s. I mean, how could the Viet Cong and the North Vietnamese withstand such death and destruction meted upon them by our awesome firepower? As highlighted in the recent Ken Burns series Vietnam, the death and destruction indeed was on an unimaginable scale, yet, in the end it was us that left with our tails between our legs.

Yet despite these uncertain results and even colossal failures, we remain addicted to strike warfare, telling ourselves that we can police the politics on the ground by dropping bombs from on high. The reality is, of course, different. Those fighting the wars on the ground are fighting for political objectives, and it is on the ground that the fight will be determined—not by the missiles and airplanes flying around above it.  This fact is not lost on Assad. His response to the strikes? He reportedly stepped up attacks against his enemies on the ground.

Therein lies the strategic dilemma for the West, which has invested billions in the strike, information, surveillance, and reconnaissance complexes that are designed to blow things up with little collateral damage. The revolution in military affairs (and billions of taxpayer dollars) indeed delivered the complex—much to the delight of political leaders, who saw in it a low-cost substitute for sending armies to the four corners of the globe to police political disputes.

Yet the foreign policy establishment in the United States desperately clings to the myths they helped create that the strike complex would mean that these wars would be short, low cost and that we could control the bad behavior of our enemies by bombing them. Our enemies must surely back down in the fact of such might. Right?

Surrounded by the wreckage around the world wrought by strike wars stretching back over half a century, you’d think that it’s time for us to get into the rehab center and confront our addiction.

By James A. Russel