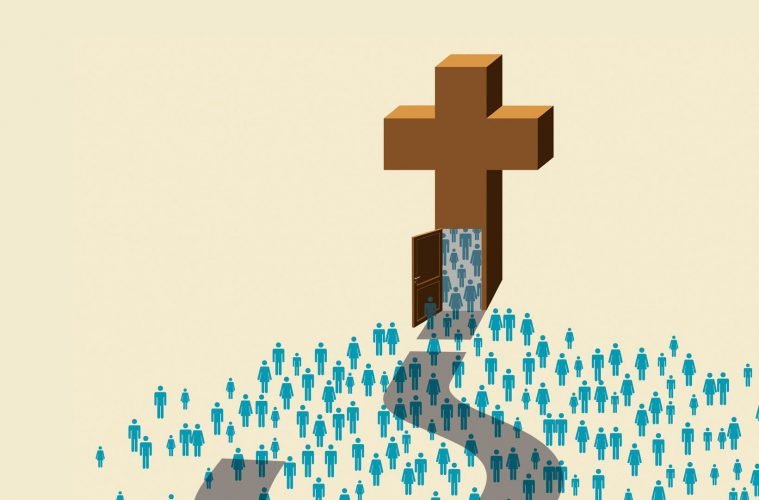 Years ago I had a work colleague who considered himself an intellectual. He was also a member of a religious denomination. It was his stated belief that only people who belonged to his particular denomination would be saved, and the entire rest of humanity was doomed.

When I asked him how he, as an intelligent person, could hold such a polarizing position, he delivered a line that I will never forget: ‘What would be my faith if I believed otherwise?’

Faith is a tricky, amorphous thing. In one way or another, most of us have experienced definite and noticeable manifestations of faith in our lives; however as a collective we have not yet gained the ability to discern between faith as a natural human phenomenon, and faith as characterized by institutions that portend to be authorities on the subject.

These institutions make faith more accessible and easier to grasp, because they constrain and ‘dumb down’ this spiritual experience within their particular limited paradigm. These institutions, you may have guessed, are called religions.

The word ‘religion’ comes from the latin word religiare which means ‘to bind.’ How fitting. Because it describes exactly what religions do: followers are bound to the particular set of characteristics of that religion that differentiate it from other representations of things that are universal: faith, love, and our inherent connection to divinity.

Here’s how it works. Highly evolved masters throughout history who have spoken about spiritual truth may gain a following. The elite few in power do what they can to quash this movement. In some cases, though, their efforts fail, because the master’s grasp and expression of truth is too powerful, and has inspired too much joy and inspiration among followers. So Plan B then becomes to infiltrate, co-opt, and eventually control the movement. Over time it becomes a religion, that is, it binds people to the enactment of external rituals whose actual meaning has become obscured.

Let’s take the Catholic Church as an example. It starts with Jesus, a highly evolved master who preached the same spiritual truths as all other highly evolved masters, but in a particularly effective and illuminating way, one that resonated with many of the people of his time.

And so he was crucified, ultimately by powerful people who did not like the threat Jesus posed to their power over others, since he encouraged people to think for themselves and have their own personal relationship with God. Is it not the height of irony that these teachings were taken over by powerful authorities that sought to place themselves as intermediaries between people and God?

Authority, of course, would prefer that its subordinates would have no idea about the joy and satisfaction of a powerful personal relationship with Divinity. But if unable to quash a powerful spiritual movement that had been grown by its followers, the next best thing is for authority to declare itself as ‘head’ of the movement.

This is exactly what Roman emperor Constantine did in 313 A.D. He ended the ubiquitous persecution of Christians by declaring a particular sect of Christianity the official religion of Rome, and himself a Christian ruler and Head of the Church. He became a great patron of this now-budding institution.

Once he had the ‘official’ sanctioned version of Christianity established, what would be the next step? Of course, label all other offshoots of the teachings of Jesus Christ, many of which had retained a much higher purity, as heretical and blasphemous. Devotees of branches such as Gnostic Christianity were forced to go underground, although likely some members would simply adopt the official religion which, after all, was still a form of Christianity guided by the teachings of Jesus.

What was next? Get it all in writing. Councils were convened by government and church authorities to put together a ‘canonized’ Bible by determining which writings were truly ‘the words of God.’ Lol. In actual fact, the determinations of what would and wouldn’t make the final cut in the official Christian bible was predicated on what would enable the Bible to be a tool of control for Church authority. As an example, any gospel that hinted at Jesus discussing reincarnation was summarily set aside; after all, how could Church authority control their followers through fear and the threat of eternal punishment if those followers thought they would simply come back in subsequent lifetimes to eventually get it right?

Once power was consolidated by the word, and the authorities of the church became the only people who could interpret the word for the masses, would that be good enough?

No. Holding power over others tends to breed the desire for more power. And so the church and the military power of government banded together for ‘noble’ enterprises such as the Crusades, to spread ‘the word of God’ to heathens of other cultures. The basic method was this: invade a culture, completely destroy any traces of their own systems of spiritual truth, and force them to adopt the ‘true’ spiritual system under pain of death if they don’t. Ah, God’s work is carried out in mysterious ways, isn’t it?

In this way the Roman Catholic Church became perhaps the wealthiest and most powerful body on the planet—as long as it maintained some form of unholy alliance with the military powers of the day.

In more recent history, the Catholic Church has had to go a little bit more on the defensive, as people started to ‘smarten up.’ Cue in the Scientific Revolution, for example. When Galileo made statements that spoke of scientific proof that the Earth revolved around the Sun, in direct contrast to Catholic doctrines, the church used threats of torture and death for heresy to force him to recant his statements. Soon after, though, the Church had to admit to this truth and position themselves more as the ‘spiritual’ authority of the world.

This type of thing has happened often over the course of the history of the Catholic Church. It must be embarrassing how many times they’ve had to admit their ‘immutable truths’ were actually falsehoods founded on ignorance (or duplicity). But they keep doing it anyway to reasonable success. Like any good control structure, they really try to stay ahead of the curve in order to maintain power.

What’s next? The pope himself admitting the possibility of extraterrestrials, and saying he would be willing to baptize them if they asked?

But these people are not stupid. They are smart and well-informed. They do not follow the core values espoused in Christianity, in any important sense—the amount of evidence of pedophilia in the Church and the odious efforts to cover it up should say enough—but they are still seen by many as a positive force. One advantage they have is access to knowledge about our true history, our origins, and all aspects about us that would facilitate control over us. Why do you think the Vatican library is so impenetrable to the general public?

Their ways of control continue today. Pope Francis has argued that it is dangerous to have a personal relationship with Jesus. Recently, he has become a strong advocate of a one-world government.

And he may just be a pawn of something bigger and more ominous: the global elite we have so often referenced. The Vatican serves as the spiritual arm. The other tentacles are the City of London, which is the economic center, and Washington, D.C., the military headquarters. Does it now make sense that these are the only independent city-states in the modern world, with borders that insulate them from the true governing authorities of the countries within which they reside?

In effect, those who would control us don’t care what the means of control is; whatever offers the promise of increasing their wealth, reach, and domination over the planet will work. As one control structure wanes, another arises in its place.

Fortunately, the antidote is at hand. Of course it is our awareness. Clearly, our awareness has led to a decline in the power and reach of the Catholic Church. It is more difficult for them to retain followers or gain new ones. They cannot force people to go to mass, pay their tithes, or adhere to their moral code of conduct.

But today our greater challenge is not only to free ourselves from any particular control structure, but more so to grasp the overall pattern of control that is ever-present in our society, and bring our collective awareness to bear on the fact that we can only be controlled if at some level we are giving our consent for it. This awareness will ultimately give us the power as co-creators of our reality to form a new world that has moved beyond the binds of control.