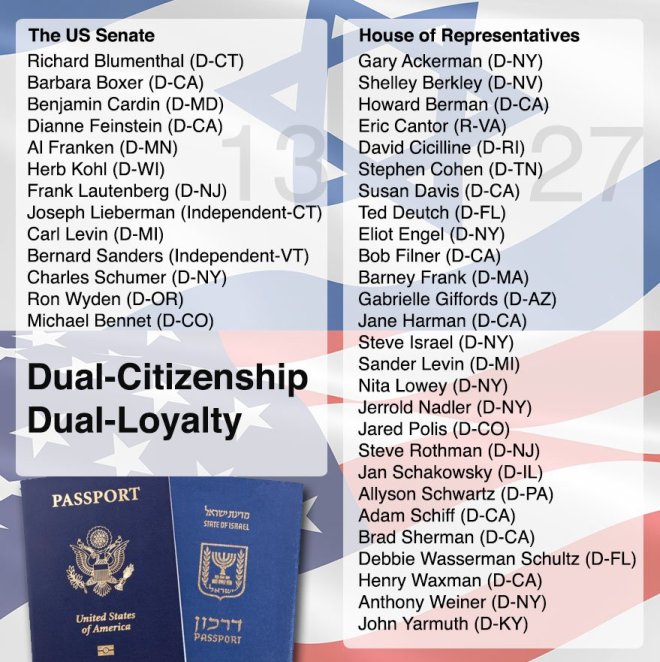 89 of our Senators and Congress  hold dual citizenship citizenship with Israel we are in Syria because of Israel ask yourself who is the real traitors to the country sacrificing American soldiers for the benefit of foreign country.

Here is a list of US politicians who have dual US/Israeli citizenship. Note the head banking and policy advising positions.

Jack Lew – Chief of Staff to the President; Treasury Secretary

Mary Schapiro – Chairwoman of the Securities and Exchange Commission

Dennis Ross (2009-2011 ) Special Assistant to the President, Senior Director for the Central Region to the Secretary of State

And that’s just the democrats! I’m sure the republicans are just as bad if not worse, but it seems harder to find information on. Here’s another list: american3rdposition.com/?p=12767

Here’s an explanation of how this used to not be allowed, then the law was changed, and also points out many big-name dual citizenship holders in the Bush and Clinton administrations: www.viewzone.com/dualcitizen.html

Why is this allowed? It is not allowed for regular US citizens to have dual citizenship, is it?

I think this type of thing is allowed because “Israel first” Zionists essentially own our government, which is because the Rothschilds own the central banking system and have money creation powers and they promote Zionism. So you play by their rules, or you don’t get big money access. This is why most industry monopolies are headed by Zionists. It’s not a random chance thing that the tops of most all industries are super gung-ho about Israel. This is also why they get the most aid, and why they have the biggest lobbying groups.

And to be clear, I’m not talking about Jews, half of whom reject zionism. I’m talking about the ideological belief system, that says the Israeli government deserves to own Mt. Zion, aka that Palestine needs to be removed and regional security for Israel needs to be ensured in the middle east. Obama is a Zionist, Biden is a Zionist. Bush is a Zionist. So is Hillary, and Trump, as their AIPAC speeches showed quite clearly.

These big bankers need to stop being able to pull everyone’s strings, but that won’t stop until people realize their money creation abilities are based on legal narratives that come from false hopes and the false appearance of authority. The government should be able to create its own money, not borrow from a private bank in a debt-based money creation system where there will always, mathematically, be more debt owed than money exists, which gives them power over the government because they are the debt collectors.

The whole thing is an absurd farce to anyone who sees the truth of it.

“It is well enough that people of the nation do not understand our banking and monetary system, for if they did, I believe there would be a revolution before tomorrow morning.” – Henry Ford