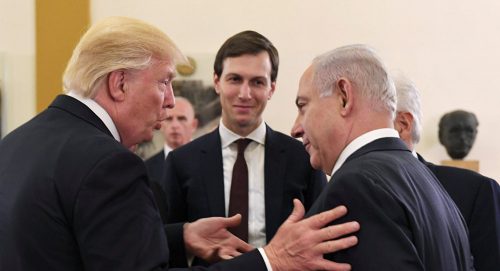 This is said to be a part of the plan to dismantle United Nations’ Relief and Works Agency (UNRWA).

Jared Kushner, a senior advisor to US President Donald Trump — and the US leader’s son-in-law — has reportedly been pushing Amman to strip 2 million Palestinians in Jordan of their refugee status, according to Foreign Policy.

Kushner raised the issue during a June visit to Jordan, in which he was accompanied by Trump’s personal Special Representative for International Negotiations, Jason Greenblatt.

According to Palestinian officials, Kushner pressed Amman to strip 2 million Palestinians of their refugee status, which would effectively end the need for the UNRWA in the country, according to Foreign Policy.

“[Kushner said] the resettlement has to take place in the host countries and these governments can do the job that UNRWA was doing,” said Hanan Ashrawi, a member of the executive committee of the Palestine Liberation Organization (PLO).

This most recent example is just one episode in the work that Kushner is conducting to undermine the UN humanitarian aid agency, according to emails obtained by Foreign Policy.

“It is important to have an honest and sincere effort to disrupt UNRWA,” Kushner wrote in an email to several US officials, including Greenblatt, in January. “This [agency] perpetuates a status quo, is corrupt, inefficient and doesn’t help peace.”

“Our goal can’t be to keep things stable and as they are. […] Sometimes you have to strategically risk breaking things in order to get there,” Trump’s son in law added.

As the Times of Israel has previously asserted, the UNRWA, whose full name is United Nations Relief and Works Agency for Palestine Refugees in the Near East, grants refugee status to all descendants of Palestinians who have fled the 1948 establishment of Israel. An estimated 2 million of the 5 million claimed to be participating in the UN program are currently registered in Jordan.

Every time Palestinian leaders sit down with Israelis, Palestine demands “the right to return” for the refugees. According to Israeli pundits, if Tel Aviv were to accept the move, Israel would no longer be a Jewish-majority state.

Tel Aviv has long argued that UNRWA seeks to destroy Israel by demographic means, although the Times of Israel asserts that the actual amount of refugees who fled the conflict is estimated in the “low tens of thousands.”

Kushner is not the only Trump appointee working to dismantle the humanitarian aid agency. Greenblatt advisor Victoria Coates has also suggested the closure of UNRWA.

“UNRWA should come up with a plan to unwind itself and become part of the UNHCR [UN High Commissioner for Refugees] by the time its charter comes up again in 2019,” Coates wrote in a January email.

In the email, Coates described her proposition as one of the “spitball ideas that [she] had that are also informed by some thoughts [she] picked up from Jared, Jason and Nikki,” referring to US Ambassador to UN Nikki Haley, another Trump appointee.

Other propositions to dismantle the UN organization include moving the UNRWA to a monthly operating budget and coming up with “a plan to remove all anti-Semitism from educational materials,” according to the Times of Israel.

“By trying to unwind UNRWA, the Trump administration appears ready to reset the terms of the Palestinian refugee issue in Israel’s favor,” Foreign Policy stated, noting that the Trump administration has unilaterally recognized the entirety of Jerusalem as the capital of Israel, effectively stripping Palestinians of their own capital in East Jerusalem.