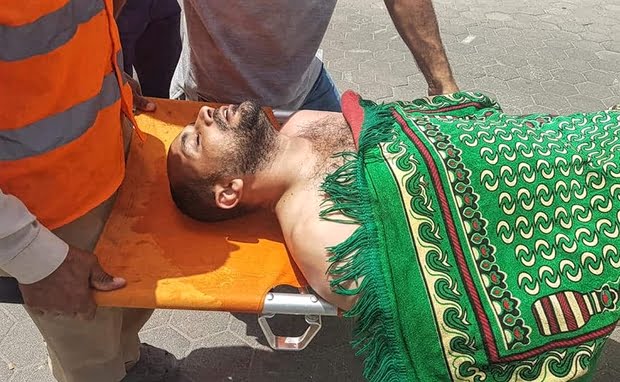 The desperation of an UNRWA worker: Gaza aid worker Nidal Wishah was dismissed by UNRWA. Here, he writes about why he tried to set himself on fire and why he feels like he has no future.

I am Nidal Wishah and I am 37 years old. As far back as I can remember, I’ve held great responsibility. I am the eldest son. I do not remember any luxuries, even for a single day.

The responsibilities of life are too large for a child to absorb, but I did meet with some success. I made it to university and after graduating I worked on several psychological support projects before getting a job at the Red Crescent.

When I was offered a job at UNRWA, the UN agency for Palestinian refugees, I had high hopes that it would provide me with a steady income source and the opportunity to do important, valuable work.

Created in 1949 in the wake of the Nakba, today more than five million Palestinian refugees depend on the organisation.

But as the years passed, my anxiety and tension grew. The pressure became so great that it felt as though my head might explode. Would my contract be renewed? Would I be a permanent employee? Would I be laid off?

I worked for UNRWA for nine years, my contract renewed twice as a temporary employee. I finally got a permanent contract last July, and I’ve been on tenterhooks ever since, waiting for a full year to pass so that I would qualify for a bank loan to pay off my accumulated debt.

This July, I was fired with immediate effect, along with 125 of my colleagues. A thousand UNRWA employees in Gaza will not have their contracts renewed. The US government’s decision to slash $300m in funding has taken effect.

Later that day, I tried to set myself on fire. I felt I had no future. Around me, hundreds of people protested the job cuts. I’m told that some of my fellow protestors fainted in front of UNRWA’s office.

This July, I was fired with immediate affect, along with 125 of my colleagues. Later that day, I tried to set myself on fire.

I don’t know what to do now. I cannot see a future.

I have four-year-old twins. My wife and I faced many difficulties in having children, but we realised our dream through in vitro fertilisation. It was very expensive and I borrowed too much money in the process. How will I pay it back now?

My salary was around $860 a month, a quarter of which went on rent, and the rest to take care of my family. I am the sole breadwinner, caring for my wife, children, parents and three siblings who are in school. I am the sole breadwinner, caring for my wife, children, parents and three siblings who are in school (Nidal Wishah/MEE)

UNRWA has thrown my family and I onto the street. The street will not be able to sustain us.

I had no option but to participate in the peaceful sit-in outside UNRWA headquarters last month.

On 23 July, we refused to let the operations director for Gaza leave his office, pressing him to reverse these jobs cuts. One of his guards threw two sound bombs, sparking mass panic; one pregnant employee had a miscarriage. The organisation denied that one of these guards threw a bomb, accusing us of doing it.

It’s very strange. How can a director working in an agency that claims to protect human rights harm his employees in this way?

I have no idea how I got to the petrol station, which is where I tried to set myself on fire. My colleagues came and prevented me from doing it.

I swear that what I did was unconscious. All I had in my mind in that moment, was that in both cases, I would die. The UNRWA sentenced me to death with its decision, but it is a slow death, one that extinguishes hope and obliterates nine years of work.

Who will save the country?

My wife and family did not immediately know what had happened to me. They saw pictures of me online after I had fainted; my kids thought I was dead, while my mother lost consciousness and was taken to hospital.

What really shocks me is that many solutions have been presented to UNRWA management to solve the crisis, such as a single-day suspension of pay for all the agency’s staff, but they have not accepted any of the solutions offered. This has confirmed to us that the goal is political.

The agency’s emergency programme is very important. If there is a war, who will save the country? Where will the displaced people be housed? From where will they get food?

At the same time, as our government in Gaza takes part in our daily slaughter and President Mahmoud Abbas imposes new sanctions, perhaps we have no right to blame others.

– Nidal Wishah is a former UNRWA employee based in Gaza

The views expressed in this article belong to the author and do not necessarily reflect the editorial policy of Middle East Eye.

Photo: After losing his job, Nidal Wishah does not know how he will be able to su