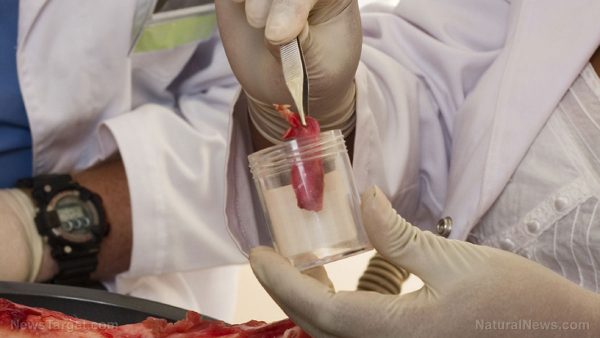 Processing American food began after World War II, when we started canning produce and adding preservatives and additives. In 1950, scientists figured out that adding antibiotics to animal feed increased the livestock’s growth rate. Then, in the early 1980s, the U.S. began extensively using hormones for livestock, and genetically engineering crops to contain bug-killer and weed-killer DNA. Artificial sweeteners became popular that decade also, when super-models featured the tall-skinny-no-figure look. Next, add in some industrial-based artificial food coloring, high fructose corn syrup, chemically-conditioned gluten, and glyphosate-ridden wheat, and what have you got? A country full of sickly humans dying young from heart disease, cancer, diabetes, osteoporosis, and Alzheimer’s disease.

Did you know that the softening conditioners used in most bread are synthetic? Most flour processed and distributed in America contains a boatload of chemicals (up to 60) that are all approved by the FDA, including bleach (which causes pancreatic and bladder cancer) and azodicarbonamide (the same kind used for shoe rubber and yoga mats).

Instead of simply using the “normal” formula for bread – unadulterated flour, water, salt and yeast, nearly all bread sold in America, including at almost every restaurant and fast food joint, fosters health nightmares no medical doctors can seem to solve.

Plus, most U.S. grain is covered in glyphosate weed killer (a.k.a. Roundup) to help dry it out before it’s cut down and piled into silos. The bleach then destroys the nutrients and the fiber, and the gooey gluten sticks like glue, along with all those chemicals, in your intestinal tract, which is literally more than 20 feet long stretched out. Got plumbing issues? It’s no wonder why. You’re eating bread-like food stuff.

Will humans who eat lab-grown meat become genetically modified themselves?

It’s the great cellular agriculture experiment and you can be the ultimate lab rat for pennies on the dollar. No more wasting your hard-earned money on grass-fed beef or organic chicken, just grab some jelly meat that’s grown in 18 days or less, a big soup spoon, and start sucking. It’s called “clean meat” because corporate Frankenfoods are always given a slogan that’s the opposite of what you get.

Future Meat Technologies (FMT) wants you to grill out some meat stuff that’s grown in a bioreactor. The first Frankenburger only cost a little more than $300,000 to concoct, but soon you can get some freaky jelly meat for just $11 — later this year, in fact. There’s no actual animal involved, except for you, the guinea pig that might get genetically altered while chewing relentlessly on meat made in a beaker.

Much like the bioreactors used by the pharmaceutical industry (but a little smaller), Future “Meat-Junk” Technologies plans to distribute their machines to farms and essentially cut the cost of meat in half. From lab to mouth, many Americans think because any food is cheap, fast, hot and tastes normal that it is normal. Will FMT market their Frankenmeat to vegetarians and vegans, or are healthy people simply not stupid enough to buy it? You can be sure that the fast food giants will hop aboard the fake meat train, and maybe before they even tell anybody what’s really in their burgers.

Folks, eat organic food that grows in nature and not in a lab. It’s just common sense, especially if you don’t want to become some cancer-ridden, demented Frankenstein banging on the window at the McDonald’s drive through, screaming for more “clean” meat and breakfast Franken-McNuggets.