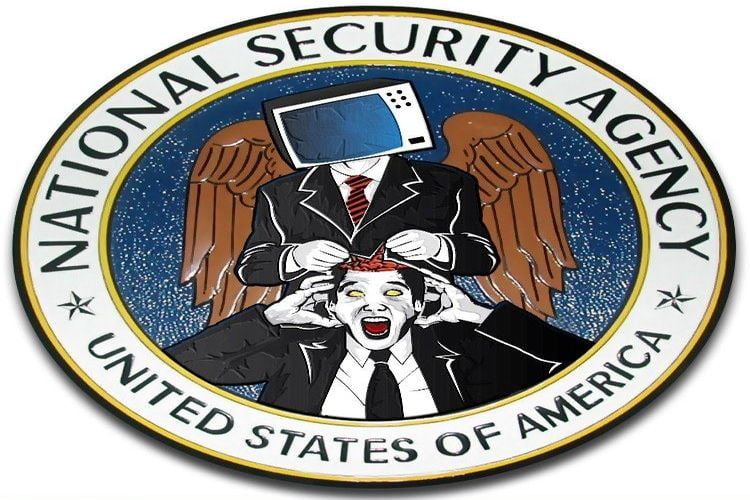 Not only has the Ruling Cabal deployed its newly developed high technology to spy on us all, but has weaponized it to entrain the minds of the masses to conform to their Globalist NWO Agenda and policies.

It’s a sad fact that over 985 Billion USD per year is being spent by the USG to spy on you and control you.

The actual total is considered classified but you can bet it is now very near to 1 Trillion USD per year.

This incredibly large secret industry has been built up, paid for with your tax dollars and deployed by the Ruling Cabal. It’s now involved in monstrous secret efforts to collate, manage and utilize all the data they have been collecting on you, in order to control your thoughts, attitudes, beliefs and actions and to attain their Globalist NWO agenda of evil.

With the Deep Underground Military Bases budget for 147 DUMBs at about 1 Trillion USD per year and the Secret Space War budget at about another 1 Trillion USD per year, there is about 3 Trillion USD for a secret Intel budget per year spent by the Ruling Cabal. This is all being done using your hard earned tax dollars, supplemented by large black funds from numerous large financial scams, illegal weapons sales for their induced wars, and their massive illegal drugs and narcotic sales.

When the Congressional spending budget is about 3.35 trillion per year, you can easily understand why the middle class in America is quickly disappearing and why the Ruling Cabal is so addicted to illegal black funds from their massive worldwide illegal drug trafficking partnerships with the narco-traffickers and drug cartels.

The Secret Shadow Government (SSG) is the operational form of the Ruling Cabal and employs its agents and cutouts to invoke and use secrecy under so-called “national security”. It’s all being done to keep We The People from ever knowing the full range of its false-flag terror, spying, mind-control and induced wars for profit. Insiders never use the term “Deep State” to describe the secret government, they use the term “Secret Shadow Government” which was first publicly disclosed by Richard Boylan, Ph.D.

The Ruling Cabal uses the Secret Shadow Government (SSG) to collect and analyze data about you and to weaponize some of its various electronic collection means. In addition it has deployed certain psychotronic devices locally and orbitally to mind-control you and in a sense create a “hive mind”, i.e. the mass-mind, entrained with beliefs that will support the Cabal’s long-planned Globalist NWO agenda.

Every kind of data you could ever imagine is now be recorded or collect on you automatically and analyzed using sophisticated algorithms:

The biggest problem the NSA always had was appropriating sufficient storage space for all the data they have collected going back to the Vietnam war picked up by its listening posts and all the far greater amounts of data their new technologies now easily and automatically collect.

When the NSA finished building Vesuvius, the world’s largest Quantum Computer at the new NSA Center in Bluffdale Utah, data storage was no longer a problem, nor was their previous inability to process and analyze large masses of data about you.

The Secret Shadow Government’s best play is to deploy devices that have the secret capability to spy and deliver psychotronic brain-entrainment at the same time in any new devices which will give the public immediate and convenient new powers. Unless the public perceives these new devices as a much preferred convenience no one will be motivated to acquire and use them.

Take the cell phone for example, the public gets instant communication without any of the previously required wires, an incredible and revolutionary convenience. And at the same time the NSA can easily record their position, what they say, who they call, while at the same time being able to deliver psychotronic entrainment to their brains, using special EMF waveforms.

The weaponization of new technologies is here now.

The weaponization of new technologies is here now and is a major threat to your ability to think, reason and know the truth about what is really going on.

Remotely induced entrainment is a new technology that is here now and is fully operational. It is not 100% effective, but overall works on most folks without their knowledge. As former CIA scientist Robert Duncan, Ph.D. stated to former Governor Jesse Ventura, the human mind has now been successfully hacked. Dr. Duncan no longer works on this and has come forth and discussed this publicly as a warning.

Many of the same technologies developed and deployed to remotely spy on Americans and others all over the world have also been adapted to deliver psychotronic mind-control to remotely entrain certain brain waves in order to shape attitudes. An attitude is a potential action that in many cases can be later activated if the proper remote inductive entrainment is delivered. This is usually easier to deploy successfully in large crowds who are overly emotional over incidents where they feel abused by authority.

In some cases this technology has been used to create voices in one’s head and even take over control in certain susceptible individuals who have been adequately pre-conditioned.

Right now the major nations of the world are engaged in a major all-out race to develop new war fighting technologies that are quite different than what have been deployed before.

Thus we see the development of sophisticated cyber warfare technologies to be deployed through the Internet as well as directly through Quantum D-wave dimensional means, called “direct quantum warfare”. These means provide inter-dimensional direct access to spy, re-encode data and processors remotely, and for direct entrainment of attitudes and perceptions in the human brain.

The specifics of how this is done is one of the deepest secrets of the Secret Shadow Government and you will not be able to find much on this subject. Some insiders deeply involved in the Secret Space War Program have claimed that the “Looking Glass” device uses these new Quantum interdimensional physics to predict the future or even envision part of it. Some have claimed that D-waves (Dimensional waves, or more accurately interdimensional waves) travel through a medium where time and space do not exist as we know them.

It is believed by some insiders that the biggest threat to any standing army or government is now these new and forthcoming quantum-based weapons that can be remotely deployed to invade the human mind individually or in mass; or to directly invade any processor (CPU), cyber network, hard-drive, flash-drive or memory device. If these quantum-based weapons are successfully refined and deployable, you can imagine how they will be a game changer.

We see the development of micro-robot swarms now being manufactured by the millions. These little devices can be dropped by transport aircraft in mass at once or deployed in small numbers on the ground near the target. They can glide, fly, crawl, climb, approach the target, lock on and then explode to kill any person or they can be set to facial recognition for identifying their intended target. They can also be set to target any living thing.

A full range of battlefield robotic weapons are being developed all the way from battle tanks, to fighter planes, to individual robotic soldiers. There are numerous massive secret programs in DUMBs where attempts are being made to develop biological androids with computer interfaces and genes modified from animal genes to produce super strength and endurance as well as psi-powers. Some are based on triple helix (rapid self-healing genes), some have quad-helix, some are Chimeras based on animal human intermixing of genes.

Some bacteria have been taken from the deepest parts of the sea, gene spliced, with the capability to “eat” aluminum or iron much faster than rust can eat iron. These new metal-consuming bacterium are reputedly able to be activated and deactivated remotely by certain frequency signals, perhaps D-wave. Could they mutate out of control? Who knows, but many of these new technologies are being sold to entities that could carelessly develop them and also carelessly deploy them.

Various antipersonnel laser and particle beam systems are being readied now and will be mass produced as soon as possible. Most large nations have an extensive bevy of these weapons and keep this a closely guarded secret.

The bottom line is that unless the current small number of evil leaders who sit at the top of the Hierarchy of the Ruling Cabal (the folks that control the deployment of all these technologies) are gelded and displaced, we will all eventually become their electronic and psychotronic cannon fodder; and they will succeed in their Globalist goal of destroying every nation and culture of the world in order to raise their NWO Phoenix government from the ashes.

One of the unexpected results of the Ruling Cabal’s deployment of the Internet for spying and surveillance is the transformation of the Internet into the New Gutenberg Press, a spontaneously emerging counter-weapon.

This new unexpected countermeasure is being used by the masses to gain serious penetration of the Cabal’s deepest darkest secrets and evil occult practices. And it can be used to diffuse this knowledge widely to the masses with a great deal of information the Controlled Major Mass Media News Cartel refuses to report.

The Ruling Cabal is deeply afraid of the masses ever coming to an understanding of their occult evil and ritual practices of pedophiling and sacrificing children. They know that if this ever occurs they will be hunted down and destroyed. Due to their arrogance and self-induced intoxication with their riches, power and status, they have only recently come to understand the scope of the threat to their evil system that the Internet as the New Gutenberg Press poses.

Yes, the Internet is the New Gutenberg Press and is now the ultimate threat to Ruling Cabal’s ability to retain power over the masses.

When considering just how revolutionary the Gutenberg Press was in 1439, one quickly begins to understand that the Internet is now even more revolutionary as a world event. This is especially apparent when one considers how it provides instant access to facts, knowledge and history.