Prepare For Change
Home ARCONTES We Are All Lab Rats In The Largest-Ever Monetary Experiment In Human... 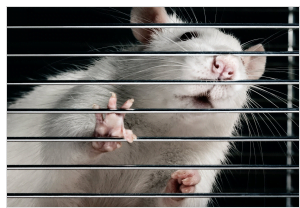 And how do things usually work out for the rat?

There are ample warning signs that another serious financial crisis is on the way.

These warning signs are being soundly ignored by the majority, though. Perhaps understandably so.

After 10 years of near-constant central bank interventions to prop up markets and make stocks, bonds and real estate rise in price — while also simultaneously hammering commodities to mask the inflationary impact of their money printing from the masses — it’s difficult to imagine that “they” will allow markets to ever fall again.

This is known as the “central bank put”: whenever the markets begin to teeter, the central banks will step in to prop/nudge/cajole the markets back towards the “correct” direction, which is always: Up!

It’s easy in retrospect to see how the central banks have become caught in this trap of their own making, where they’re now responsible for supporting all the markets all the time.

The 2008 crisis really spooked them. Hence their massive money printing spree to “rescue” the system.

It’s not hyperbole to say that the monetary experiment conducted over the past ten years by the world’s leading central banks (and its resulting social and political ramifications) is the largest-ever in human history: 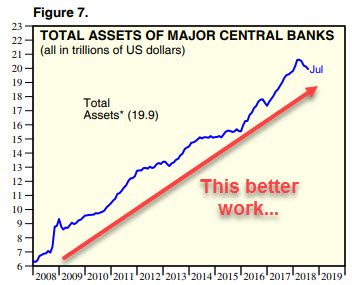 This global flood of freshly-printed ‘thin air’ money has no parallel in the historical records. All around the world, each of us is part of a grand experiment being conducted without the benefits of either prior experience or controls. Its outcome will be binary: either super-great or spectacularly awful.

If the former, then no worries. We’ll just continue to borrow and spend in ever-greater amounts — forever. Perpetual prosperity for everyone!

But if things hit a breaking point, then you had better be prepared for some truly bad times.

Excessive money printing leads to the destruction of currency. Fiat money (like the US dollar, the Euro, the Yen, and every other world currency) is a social contract and has an associated set of related agreements. When that contract and those agreements are broken by reckless expansion of the currency base, things fall apart fast. We need look no further than current-day Venezuela to understand that.

It’s important to remember that money — whether physical cash or in digital form, stocks, or bonds — is just a claim on real wealth. Real wealth is land, clothes, food, oil…you know, real things.

We expect that our cash will be able to buy us the real things we want when we want them. We trust that our stocks give us an ownership stake in a real company producing real things for real profits. We rely on our bonds being re-paid in the future along with interest; but if not, we expect that our bond becomes a claim on valuable collateral.

Ideally, the money supply and the amount of real wealth should exist in balance. As money is a claim on “stuff”, as economic output (i.e. “stuff”) increases, then so should the claims. And vice-versa during periods of economic contraction.

But what happens when the claims start to far outweigh the real “stuff”? That’s when things get precarious.

Note how dramatically the claims represented by just the S&P 500 index alone have quadrupled since the start of 2009, driven by the central banks’ quantitative easing programs: 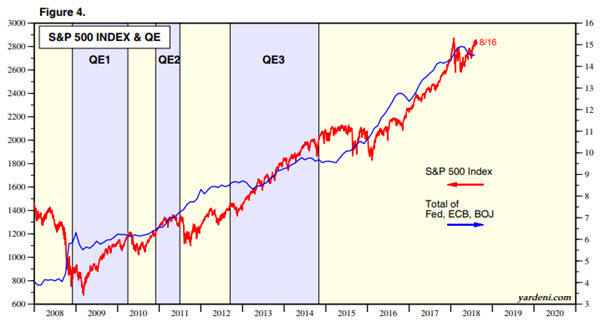 The flood of money unleashed by QE didn’t result in vast amounts of new actual wealth being created (i.e. greater productive output per capita). But it did result in grotesquely-inflated financial asset prices that have helped to create the most profound wealth and income inequality seen in our lifetime (perhaps ever).

The Many Sins Of The Central Banks

The list of central bank-induced injustices is long. It reads like the rap sheet of a virulent psychopath: $trillions looted from savers and handed to the big banks and leveraged speculators, ruined pensions, shattered retirement dreams for millions, record amounts of debt in every corner of the global economy, and an increasingly unaffordable cost of living for everyone but the elite 1%.

“But we had to save the system!” cry the central bankers in their defense.

Even if that were the case (and I dispute whether the world is really better off for having saved Citibank et al.), that rescue should have ended back in mid-2009, at the latest.

But instead, the central banks ramped up their wanton ways in the years since the GFC. Did you know that their largest-ever printing spree happened over the past two years? (2016 to 2017): 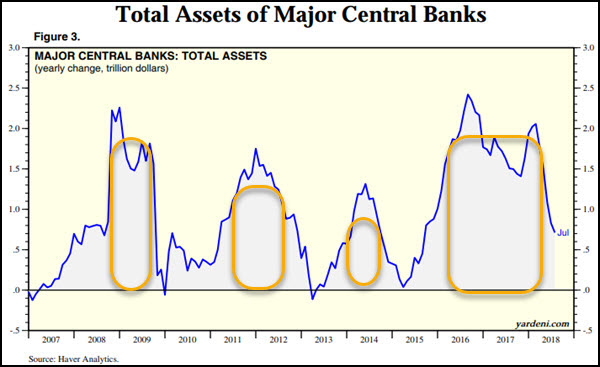 The bigger the printing spree the bigger the fundamental distortions. In such a world, up becomes down, black becomes white, and right becomes wrong.

All of which means that fundamental analysis, has been all but useless as a predictor of prices. All that has mattered is the answer to the question: “How much will the central banks print next?”

In such an environment, there’s no room for investors. It forces all of us to become speculators, trying to predict what a small cabal of bankers are thinking.

But among their very worst offenses has been the manipulation of sentiment. The prices of financial assets and commodities have become political and propaganda tools, which means that nothing can be left to chance. All prices have to send the “right” signals at all times, in the same way that certain news outlets pump a point of view endlessly. Repetition creates its own reality.

Because of the increasingly frequent (probably daily), interventions by central banks and their proxies, the financial markets have become ““markets””. They no longer provide us with any useful signals about the future or about the current health of the economy.

Instead, they only tell us what the authorities want us to hear.

To them, all that matters is strength and stability. As long as those conditions contine to be met for stocks, bonds and real estate prices, most people are content to let things ride and not probe too deeply.

But when this scam comes to its inevitable end, the crash will be spectacular when it arrives.

This reckoning is already way overdue.  At this point, we find ourselves in the odd position of rooting for it to happen soon, as the potential energy in the system builds with every passing day. Our worry is that if the crash is delayed for much longer, its resulting carnage will be so large that it will be unsurvivable.

And while we mean that in the figurative sense for people’s portfolios, it’s possible that the crash could become literally unsurvivable if the political “solution” to deflect blame away from the the central banks and their DC partners-in-crime is a kinetic war.

When viewed in that light, America’s histrionic attempts to demonize Russia over the past few years begin to make frighteningly more sense.

We’ve been vocal of late about the numerous signs that another great financial crisis is building. The gut-punch Turkey hit global markets with this week is just one example.

Yes, it will be painful to crash from here. But once the needed correction is underway, we’ll have the opportunity to make the best of it.

We can pick up the pieces and begin building towards a future we can all believe in.

Yes, there’s no avoiding the pain of taking our lumps for the the past mistakes we’ve made. But we don’t have to compound our misery by continuing to do more of exactly what got us into this mess in the first place. We simply need the courage to face the psychological burden of admitting to our prior failings.

It all starts with being honest with ourselves.

Look, we all know the world is finite. Infinite economic growth on a finite planet is an impossibility. We have all the data we need to make that conclusion. Every passing day where we pretend that’s somehow untrue or avoidable makes the eventual adjustment that much more wrenching.

It’s an intellectually simple exercise to conduct. But an emotionally impossible task for those whose internal belief systems would be hopelessly compromised by allowing that logic to penetrate their world view.

And so the future will be represented by two sorts of people: those able to face what’s coming head on and prepare accordingly, and those who can’t.

I sincerely hope that you’re not among those deterred from preparing by the last gleaming of today’s glittering stock prices. We’re going to need as many prepared people as possible in the coming future.

And we may need them soon. The severe recent deterioration in the Emerging Markets threatens a contagion that could well start the next crisis.

Turkey is currently in a major currency crisis threatening to metastisize into a full-blown sovereign debt crisis. Defaults there will spill over into Europe’s banking system (which has made loads of shaky loans to Turkey), and from there cause domino effects throughout the rest of the world.

But Turkey isn’t the weakest or the most worrying country faltering: Italy is stumbling, as is Brazil, and even China. But Asia ex-China is the real powderkeg. Their unserviceable debts dwarf everybody else.

In Part 2: The Emerging Market Threat, we detail out the specific concerns to watch for in the fast-unfolding Emerging Markets drama. Which countries pose the greatest threat? And how bad could things get if the contagion indeed spreads?

For years we have predicted that the next crisis will progress “from the outside in” as the weaker players succumb first. That appears to be what we are seeing now, and it’s causing me to advance my own personal preparations.

I recommend you do the same.