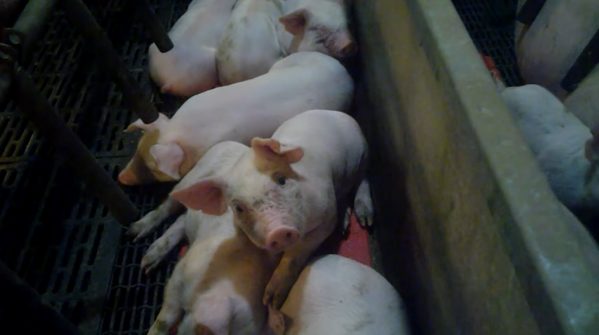 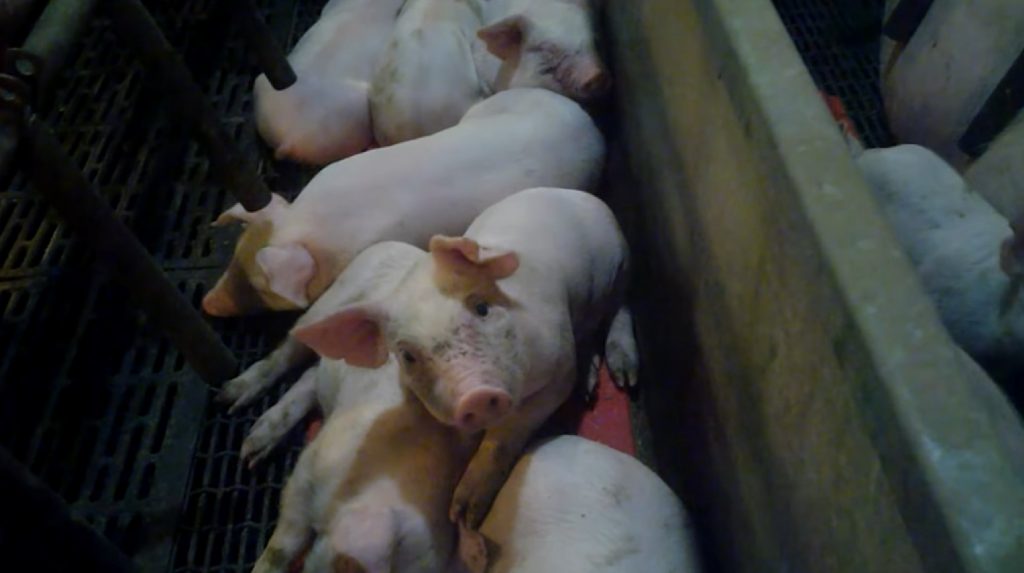 In September of last year, two executives of JBS, the world’s largest meat producer, based in Brazil, were arrested and charged with insider trading. In May 2017, the billionaire siblings—Wesley Batista, JBS’s CEO, and his younger brother Joesley, the firm’s former chairman—admitted to bribing more than 1,800 politicians and government officials, including meat inspectors, in an effort to avoid food safety checks.

Now, new undercover video shot by a Mercy for Animals (MFA) investigator at Tosh Farms, a JBS pork supplier based in Franklin, Kentucky, exposes what the animal rights group calls the “malicious and systemic abuse of mother pigs and piglets.”

“I’ll never forget the way they looked up at me,” said Tyler, the MFA investigator, about the pigs he documented at Tosh Farms. “They all shared the same look of helplessness and fear.”

“One mother pig stumbled down a corridor with her uterus hanging outside her body. She wouldn’t live much longer,” he said on an MFA website launched specifically to document the JBS investigation, jbstorture.com.

Tyler witnessed workers at Tosh Farms kicking and striking animals in their faces, ripping out the testicles of piglets without any pain relief, and even smashing the heads of piglets against the ground in order to kill them.

Those piglets who did not immediately die were left to suffer, denied proper veterinary care. “A worker grabbed a piglet, just hours old, by the feet and swung him high and then slammed his head down against the hard concrete,” said Tyler. “Any life left quickly vanished.”

“From the day pigs are born until the day they are violently killed for JBS pork, their lives are filled with misery and deprivation,” said Matt Rice, president of MFA, in a press statement. “If JBS executives abused even one dog or cat the way their suppliers abuse millions of pigs, they would be jailed for cruelty to animals. As the largest meat company in the world, JBS has the power and responsibility to end this torture.”

Clare Ellis, publisher of Stone Pier Press, which recently released “Sprig the Rescue Pig,” the first of its Farm Animal Rescue Books for children, was appalled: “Stories like this are even more heartbreaking and upsetting when you consider how very smart, curious, affectionate and sensitive pigs are.” She added that, “Close to 99 percent of animals raised for food come from factory farms, which, in addition to being terribly cruel, do an enormous amount of environmental damage.”

Following the July 17 release of the video, which was taken between December 2017 and March 2018, JBS said it suspended shipments from that supplier site. “The images presented in the video fall completely outside the company’s standards,” JBS said in a statement, but did not name the supplier involved.

But for MFA, suspending shipments from that single supplier isn’t nearly enough. “JBS’s decision to suspend Tosh Farms as a supplier is too little, too late,” Kenny Torrella, director of communications with MFA, told Truthout. “It amounts to nothing more than meaningless PR spin.”

The group, headquartered in Los Angeles, is now calling on JBS to end factory farm cruelty across its global pork supply chains, including the elimination of painful mutilations. In addition, MFA is calling on JBS to prohibit its suppliers from housing sows in tiny gestation crates for nearly their entire lives. These metal cages, the standard of which measures just 6.6 feet x 2 feet—so small that they can’t even turn around or lie down comfortably—are where pregnant sows live in factory farms around the globe for nearly their entire lives. In the United States as of 2016, there were 5.36 million breeding sows, most of them kept in gestation crates.

Confined to tiny gestation crates, mother pigs are not only denied basic natural behaviors like playing, exploring and engaging with their peers and children, but they also must endure immense and prolonged mental and emotional suffering. “These curious animals lose their minds from frustration and stress,” writes Lucas Alvarenga, vice president of MFA in Brazil. “They often also suffer painful pressure sores from rubbing against the bars of their crates and crippling joint problems as their muscles waste away from lack of use.”

While gestation crates are still the norm across the world, things are beginning to change for the better. Canada, the European Union, New Zealand and Australia, as well as 10 US states, have banned cruel gestation crates. Further, more than 60 major food companies—including McDonald’s, Walmart, Burger King and Nestlé—have said they would ban gestation crates from their suppliers.

In addition, California voters will have the opportunity in November to ban the sale of pork from pigs confined in gestation crates. If the measure passes, that will impact Tosh Farms and JBS, as the pigs reared at Tosh are then transported to a JBS slaughterhouse in Louisville, Kentucky, which supplies pork products to stores across California.

The systemic abuse and torture of pigs is an industry-wide problem. Last year, MFA investigators at the Aurora cooperative pig factory farm in the state of Santa Catarina in Brazil, the third-largest meat producer in Brazil and a major pork exporter to the United States, recorded video of pigs and piglets enduring a wide range of cruelty, including, notes Alvarenga, “workers slicing off the tails, cutting holes in the ears and grinding the teeth of piglets without any pain relief.”

Animal rights advocates are quick to point out that pigs—as well as other animals raised for human consumption—are intelligent, have rich emotional lives and possess unique, individual personalities. For some, these are reasons to not eat them. Ellen Page, one of many celebrity vegans who have used their fame to speak out on behalf of animals raised for food, said, “The inhumane factory farming process regards animals and the natural world merely as commodities to be exploited for profit.”

“The animals who are raised to be food for humans are so much more than just burgers and bacon,” said Marc Bekoff, professor emeritus of ecology and evolutionary biology at the University of Colorado, Boulder, and co-author of The Animals’ Agenda: Freedom, Compassion, and Coexistence in the Human Age.

“Pigs, cows, chickens, turkeys and other non-human animals whose flesh is destined to wind up in our mouths were once sentient beings with rich emotional lives,” said Bekoff, who is also the co-founder, with Jane Goodall, of Ethologists for the Ethical Treatment of Animals. “But because consumers rarely interact with them while they are still alive, they don’t see that these animals feel such a wide range of emotions, ranging from joy to sadness to grief, just like we all do.”

Non-human animals aren’t the only victims of the factory farm system. Slaughterhouse workers must witness the nightmarish conditions that the animals must endure. Some workers must do the actual killing, day in and day out.

“The psychological toll this takes on a person cannot be underestimated,” writes Ashitha Nagesh. “Slaughterhouse work has been linked to a variety of disorders, including PTSD and the lesser-known PITS (perpetration-induced traumatic stress). It has also been connected to an increase in crime rates, including higher incidents of domestic abuse.”

This article was produced by Earth | Food | Life, a project of the Independent Media Institute.

Reynard Loki is a senior writing fellow and the editor and chief correspondent for Earth | Food | Life, a project of the Independent Media Institute. He previously served as the environment, food and animal rights editor at AlterNet and as a reporter for Justmeans/3BL Media covering sustainability and corporate social responsibility. He was named one of FilterBuy’s “Top 50 Health & Environmental Journalists to Follow in 2016.”