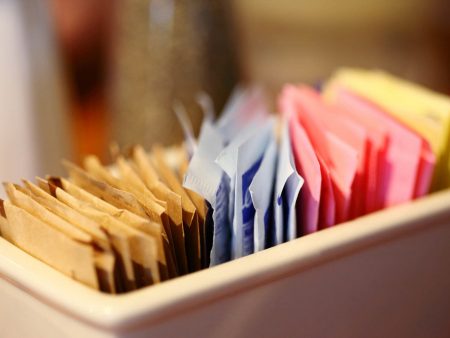 If you value you’re health, it might be time to ditch ‘diet’ foods from your diet…

The American Diabetes Association states foods and drinks that use artificial sweeteners are an option that “may help curb your cravings for something sweet” if you have diabetes. They’re among a number of public health organizations spreading the deceptive and incorrect message that artificial sweeteners make a sensible alternative to sugar for diabetics — even as the research continues to accumulate to the contrary.

In a small, preliminary study presented at the European Association for the Study of Diabetes in Lisbon, Portugal, researchers at the University of Adelaide in Australia revealed that artificial sweeteners impair the body’s response to glucose, reducing control of blood sugar levels.1,2 The study involved 27 healthy participants who were given either capsules of the artificial sweeteners sucralose (brand name Splenda) and acesulfame K in an amount equivalent to consuming 1.5 liters of diet drinks a day, or a placebo.

It took just two weeks for the artificial sweetener group to show adverse effects to their blood sugar levels, including a reduction in numbers of the gut peptide GLP-1, which limits the rise in blood sugar after eating. Lead study author Richard Young, associate professor at the University of Adelaide, said in a news release, “This highlights the potential for exaggerated post-meal glucose levels in high habitual NAS [noncaloric artificial sweeteners] users, which could predispose them to developing Type 2 diabetes.”3

Critics of the University of Adelaide study suggested it was too small and “impossible from the data available” to conclude that the observed changes would lead to diabetes.4 However, it’s not the first study to suggest such a link. For instance, drinking aspartame-sweetened diet soda daily increased the risk of Type 2 diabetes by 67 percent (regardless of whether the participants gained weight or not) and the risk of metabolic syndrome 36 percent in one study.5

Artificial sweeteners may increase your risk of weight gain, obesity, metabolic syndrome and other related problems like Type 2 diabetes by inducing “metabolic derangements”, according to a report published in the journal Trends in Endocrinology and Metabolism.6 Research published in Applied Physiology, Nutrition and Metabolism also found aspartame intake is associated with greater glucose intolerance in people with obesity.7

Glucose intolerance is a condition in which your body loses its ability to cope with high amounts of sugar, and it’s a well-known precursor to Type 2 diabetes. It also plays a role in obesity, because the excess sugar in your blood ends up being stored in your fat cells. This means obese individuals who use aspartame may have higher blood sugar levels, which in turn will raise insulin levels, leading to related weight gain, inflammation and an increased risk of diabetes.

As far as sucralose goes, in April 2017 research presented at ENDO 2017, the Endocrine Society’s 99th annual meeting in Orlando, Florida, also found that this artificial sweetener promotes metabolic dysfunction that may promote the accumulation of fat.8

Sucralose was tested on stem cells taken from human fat tissue, which revealed that a dose similar to what would be found in the blood of someone who drinks four cans of diet soda a day increased the expression of genes linked to fat production and inflammation, as well as increased fat droplets on cells.9

The study’s lead author, Dr. Sabyasachi Sen, associate professor of medicine and endocrinology at George Washington University in Washington, D.C., noted in a press release, “From our study, we believe low-calorie sweeteners promote additional fat formation by allowing more glucose to enter the cells, and promotes inflammation, which may be more detrimental in obese individuals.”10

The fact that the artificial sweetener was associated with increased glucose uptake in the cells was particularly concerning, as it could have detrimental effects for people with elevated blood sugar levels, like those with diabetes or prediabetes.11

It’s a little-known fact that artificial sweeteners have been shown to induce glucose intolerance by altering gut microbiota.12 Research led by Eran Elinav of the Weizmann Institute of Science in Rehovot, Israel, first showed that mice fed artificial sweeteners developed glucose intolerance after 11 weeks. They then revealed that altering the animals’ gut bacteria influenced their glucose response.

Specifically, when they transplanted feces from glucose-intolerant mice consuming saccharin to mice with sterile intestines, the latter group developed glucose intolerance, “indicating that saccharin was causing the microbiome to become unhealthy,” Scientific American reported.13 Perhaps the most revealing part of the experiments came when the researchers tested artificial sweeteners on people. Scientific American continued:14

“[Elinav’s] team recruited seven lean and healthy volunteers, who did not normally use artificial sweeteners, for a small prospective study. The recruits consumed the maximum acceptable daily dose of artificial sweeteners for a week. Four became glucose intolerant, and their gut microbiomes shifted towards a balance already known to be associated with susceptibility to metabolic diseases.”

Splenda has also been found to reduce the amount of beneficial bacteria in rat intestines by 50 percent15 and depending on which ones are affected it could certainly affect your diabetes risk. Studies have found that the microbial composition in diabetics differ from nondiabetics.16

A researcher in Amsterdam, Dr. Max Nieuwdorp, has published a number of studies looking at changes in the microbiome that are characteristic of Type 2 diabetes.17 In one trial, he was able to reverse Type 2 diabetes in all of the 250 study participants by doing fecal transplantations on them. Remarkable as it may sound, by changing the makeup of the gut bacteria, the diabetes was resolved, so it’s not a stretch to think that the opposite could also hold true.

Part of the problem with artificial sweeteners is that the sweet taste they provide (in many cases even hundreds of times sweeter-tasting than sugar) does not match up with the energy (or calories) the food provides.

Your body, however, is designed to relate the two, and a recent study by Yale University School of Medicine researchers revealed that the mismatch that occurs when consuming artificially sweetened foods and beverages leads to disruptions to metabolism.18,19 In a Yale University press release, senior author and psychiatry professor Dana Small said:20

“The assumption that more calories trigger greater metabolic and brain response is wrong. Calories are only half of the equation; sweet taste perception is the other half … Our bodies evolved to efficiently use the energy sources available in nature. Our modern food environment is characterized by energy sources our bodies have never seen before.”

The study found that an artificially sweetened, lower-calorie drink that tastes sweet can trigger a greater metabolic response than a drink with a higher number of calories.21 Your body uses the drink’s sweetness to help determine how it should be metabolized. When sweetness matches up with the calories, your brain’s reward circuits are duly satisfied. However, when the sweet taste is not followed by the expected calories, your brain doesn’t get the same satisfying message.22

This may explain why diet foods and drinks have been linked to increased appetite and cravings, as well as an increased risk of diabetes and other metabolic diseases.23,24 When you eat something sweet, your brain releases dopamine, which activates your brain’s reward center. The appetite-regulating hormone leptin is also released, which eventually informs your brain that you are “full” once a certain amount of calories have been ingested.

However, when you consume something that tastes sweet but doesn’t contain any calories, your brain’s pleasure pathway still gets activated by the sweet taste, but there’s nothing to deactivate it, since the calories never arrive. Artificial sweeteners basically trick your body into thinking that it’s going to receive sugar (calories), but when the sugar doesn’t come, your body continues to signal that it needs more, which results in carb cravings.

Yale Cardiologist — and Ex-Diet Soda Fiend — Speaks Out Against Them

Dr. Harlan Krumholz is a cardiologist at Yale University School of Medicine who openly states, “I used to pound down diet drinks.”25 Like so many Americans, he believed the low-calorie, sugar-free drinks to be a guilt-free source of caffeine that helped him keep his weight down. Now he feels betrayed, and he’s speaking out against them. Krumholz cited a recent systematic review and meta-analysis of randomized controlled trials (RCTs) — the gold standard of research — which found:26

He also mentioned other concerning studies, like one that found artificial sweeteners activate different areas in the brain than regular sugar,27 which could ultimately influence feelings of hunger and reward pathways.

Another, conducted by his Yale University colleagues, found artificial sweeteners “are not physiologically inert compounds” and may “impact energy balance and metabolic function, including actions on oral and extra-oral sweet taste receptors, and effects on metabolic hormone secretion, cognitive processes (e.g., reward learning, memory, and taste perception), and gut microbiota.”28 Krumholz wrote in The Wall Street Journal that he’s stopped his daily diet drinks and is removing them from the rest of his diet as well.

“It is reasonable to ask why these substances were not evaluated as drugs in the first place,” he says. “Millions of people are exposed to them every day, and yet their long-term effect is uncertain. Could they be actually causing the health problems they were intended to prevent? I don’t know the answer at this point, but it seems to me that the burden of proof is on the manufacturers to show benefit and demonstrate safety through clinical trials …

If, in the end, we discover that large-scale consumption of diet drinks and foods helped fuel the obesity epidemic, it would be more than ironic. It would be tragic.”29

Are You Ready to Ditch ‘Diet’ Foods From Your Diet?

I would not recommend waiting for public health agencies to catch up to the science and change their stance on artificial sweeteners before making changes to your diet. If you’re currently an artificial sweetener fanatic, or even if you consume them in moderation, ditching them from your diet is a smart move for your health. Be aware that they’re found not only in diet sodas but also in many low-calorie and reduced-calorie foods, from yogurt and ice cream to bread and salad dressing.

Stevia is an acceptable replacement, but I also suggest curbing your sweet cravings by eating fermented vegetables or drinking water with lemon or lime juice added — the sour taste helps reduce cravings, as does organic black coffee.30,31 To learn more, my book “Sweet Deception” has the details about why artificial sweeteners are so hazardous for your health as well as common artificial sweetener-related side effects to watch out for.